It should be obvious. The name ArtCenter say it all. Perhaps the second half of the name, “Center”, is trivialized or too commonplace in today’s world. But, ask those that know. ArtCenter College of Design is a hub, focal point, gathering place, and launchpad for those in the creative fields. And, arguably, the school is the global birthplace for more executive level and supporting transportation designers than any other institution. Annually, the college pays homage to the talented individuals in car styling and their handiwork in the form of the ArtCenter Car Classic 2019.

This year, the ArtCenter Car Classic 2019 not only features one-of-a-kind designs, but it also compares several original designs and the production or current version of the same car. Indeed, the school’s hillside campus is loaded with dazzling displays of metal and composite bodies. The bulk of the cars normally reside in museums or private collections, so today is the rare day out in the brilliant sunshine.

AutoDesignO is asking one of the notable alumni, Chip Foose, his impression of the ArtCenter Car Classic 2019. In addition, on the famed campus is designer Dan Sims. Rounding out the Q&A is performance-minded, industry pro, Pete Callaway. None are strangers to the Car Classic, and all have opinions based on their backgrounds and individual career paths. Nevertheless, they do share a common vision of the afternoon. We whole-heartedly agree, it’s the people that make this school the envy of industry. 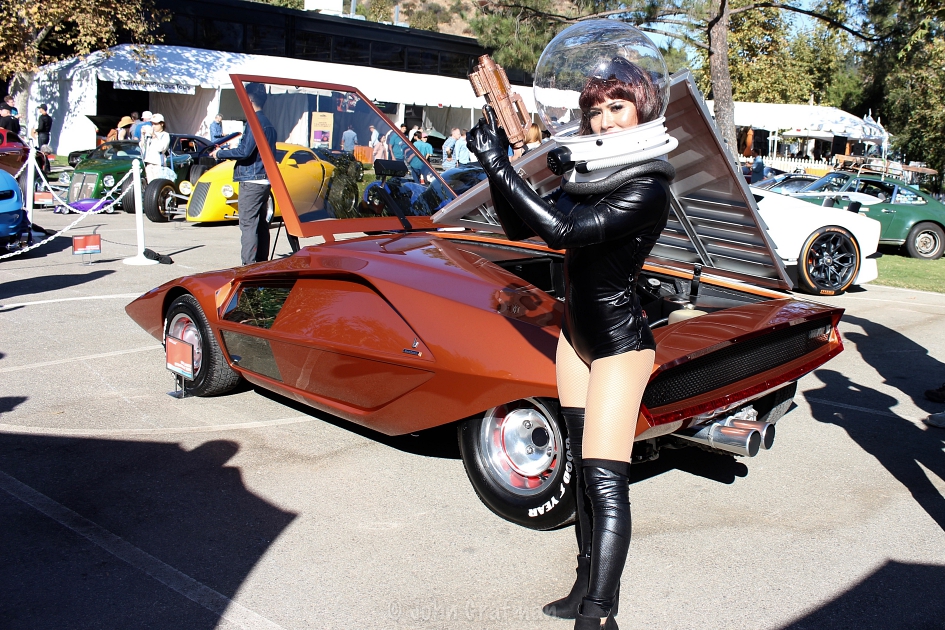 AutoDesignO:  What makes the ArtCenter Car Classic 2019 so unique?

ADO:  Who are the people that you’re encountering today at the ArtCenter Car Classic 2019?

Chip Foose:  I can’t tell you all of them, but the gentleman that owns the Citroen, I got to sit in that car. Roger Zrimec who brought Strother MacMinn’s Jaguar, talking about that car as well as his artwork. Rosa Farrer that brought Joe’s [Farrer] ’65 Mustang Shelby is here, the GT350, which is a car that my father painted back in the ’80s,  so it was great to see it again. I hadn’t seen it since my dad had first finished it.

Joe’s Farrer ’65 Mustang Shelby is here, the GT350, which is a car that my father painted

Joe was my teacher here at ArtCenter and great to see that car again, as well as Jim Powers, who brought his Thunderbird here. I did work with Jim back in the ’80s before he retired and he’s still into it. I also talked to the gentleman that brought this ’63 Split-Window Corvette here. It’s an absolutely beautiful car (Darwin & Patricia Ludi’s 1963 Chevrolet Corvette winner of the Best American Design Award). Talked to Lance from Super Performance about all the cars that he brought here. 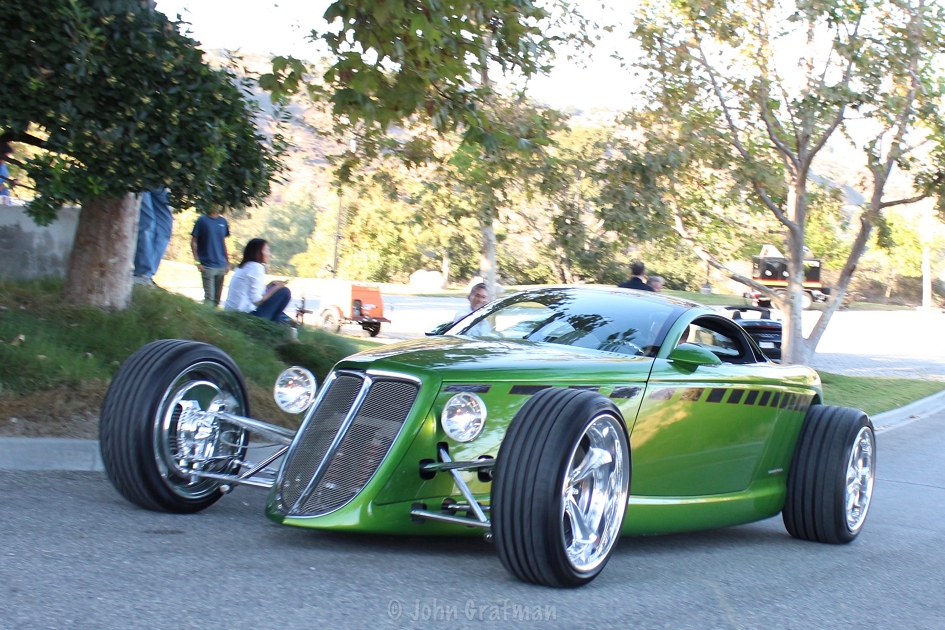 I also talked to the gentleman that brought his Maserati. It’s all the original pieces on this, I believe he said it was a 1931 Maserati race car, that those are all the original pieces other than the frame and body, because the car was totaled. All the pieces were put in a crate. He got the crate and then ended up recreating it with a friend of mine. It was Marcel De Ley, did the bodywork on the car.

Then, I also talked to, well, most of the cars are gone, but the gentleman that brought the 1958 Williams Roadster. He was here, so I got to talk to him about how he’s the caretaker of the car now. There’re some amazing cars here and it’s phenomenal to be able to look at those cars and talk to the people who brought them, as well as talk to the other people that came here to experience all this and what they thought about the show.

ADO:  I’m sure they were just as enamored having you here as well.

Chip Foose:  It’s a pleasure to be here. It’s my pleasure, just as it is everybody else that’s here.

Dan Sims:  One of the things that is key is that ArtCenter plays such a huge role in basically supplying a huge proportion of the world’s auto designers.

Having spent a good part of my career in automotive design, I know a lot of people from ArtCenter, so I feel a certain kinship and a certain connection to the school even though I didn’t come here directly (alumni of University of Cincinnati) .

Also, too, we’ve worked with ArtCenter a lot in the past in jobs that I’ve done with having, for example, interns or joint projects and things like that. So, I have a certain feeling of connection with the school.

But one of the things I think is really special is that it’s [the ArtCenter Car Classic 2019] a car show that’s a little bit different than your normal classic car show because the emphasis is about design. People that come and look at it, they’re looking at it not only from the appreciation of the car as a mechanical thing, but also kind of looking at it with the eyes of designers. It attracts a lot of people who are in the industry, who are interested in its students, and it’s a good mix, and it’s a friendly atmosphere.

I think it’s a good time to meet old friends. To me, it feels a bit like a reunion. And it’s one of those places that if you are wanting to connect with people that you’ve worked with or known over the years, it’s a good bet that if you come to the show, you’re going to see them. 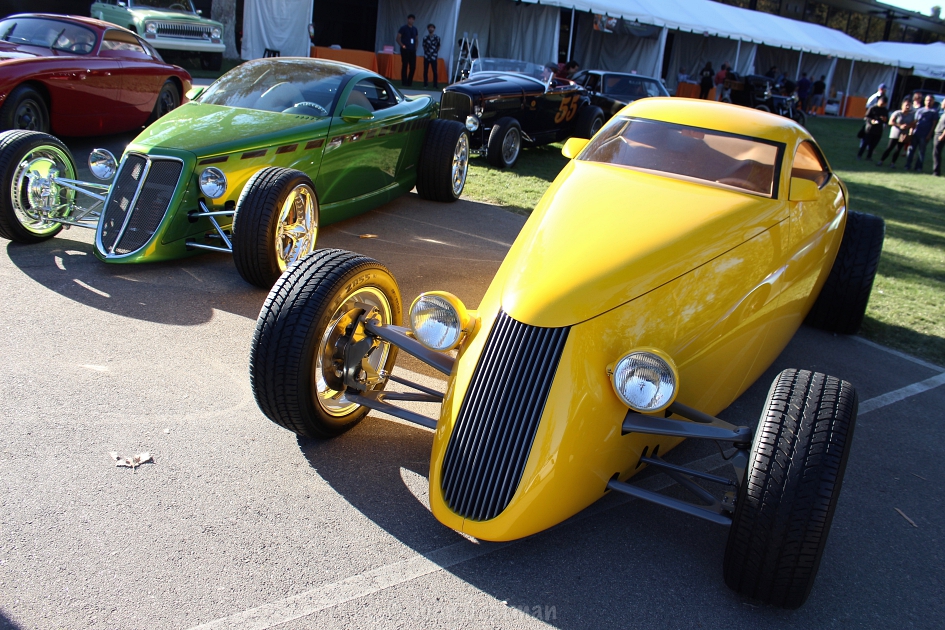 It’s a really great combination of fantastic cars, a super setting, it’s an iconic school within the industry. And at the same time, there’s like human connection because you’re always running into old friends and people that you’ve known over the years. And then also seeing the fresh crop of new talent and people who adore every aspect of classic cars, like Classic Car Restoration, coming in to view these stunning vehicles.

Dan Sims:  Yes. But I think too, it’s cool because right now the automotive industry is in an inflection point and so it’s a kind of an interesting crossroads of vehicles from the past, and you can see kind of the history and how it’s evolved over the years, and there’s an appreciation for that.

But there’s also glimpses of what people are imagining as the vision of the future because with electrification, and 5G networks, and additional communication, and artificial intelligence, and all of these things that are coming that are disrupting so many other parts of our lives, it’s also the auto industry is going to go through a period of big disruption. And so kind of getting ahead of that and imagining what that world could be is an interesting thing to do. I think that’s another kind of exciting thing to see as well, is kind of what are these young kids who are going through design school today, what’s their vision of the future and how are they making sense of all these new trends and technologies that are hitting the marketplace.

Pete Callaway:  The ArtCenter Car Classic 2019 is, if there were only one car event to go to in your time, this would be my choice. You could say anything from the people and the cars and et cetera. It’s different every year. There’re no two vehicles alike. This is not a Concours de Marque of any sort. This is a little bit of everything, which is what keeps it interesting. Frankly, you can tend to get burned out on the local Cars and Coffee every weekend and this is something that is always fresh and different. 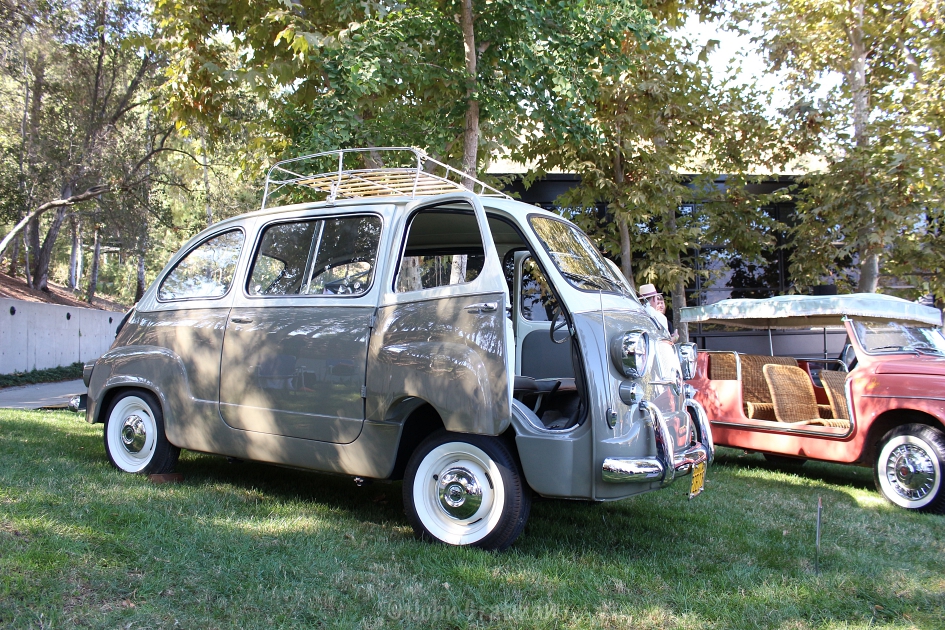 The cool thing to me now is that, and this year highlights it, is that there are enough generations of single designs that they’re doing, a design comparison between first or old and current, which is a great thing to see. It highlights the point of what you like versus what is actually good design.

It is the car that stands the test of time, which solidifies its design quality

When you put together something like an original Fiat versus today’s Fiat or a Mini Cooper or the Corvette or any one of these, you can all of a sudden say, “Which one of them do you actually really like?” It’s probably because it’s a significant good design work, which is kind of a highlight of ArtCenter as a whole, is what’s pleasing design versus … and it’s always something that’s timeless. It is the car that stands the test of time, which solidifies its design quality to me.

It’s very interesting that, for me, it’s almost always the original which is validated. I don’t know what to say. There’s a couple that I think stand out and one is the Mazda Miata, for example. Look at the two next to each other. The new one is a huge advance, as opposed to a Mini Cooper, where clearly the old one’s always going to prevail (Peiheng “Jackson” Zhang’s 1985 Austin Mini Cooper winner of the First Impressions Award / Judges: Marek Djordjevic, Jacques Flynn, Joann Jung, Richard Kim, Phillip Sarofim).

Not too surprisingly, Jay Leno shows up to moderate a discussion

Roaming the ArtCenter campus on this Sunday is like few other occasions. Southern California is awash in auto related gatherings, yet the Car Classic stands apart from virtually any other. Not too surprisingly, Jay Leno shows up to moderate a discussion with Derek Jenkins – vice president of design at Lucid Motors, and Richard Kim – head of design at California startup Canoo. This is but one of several featured on-stage opportunities with special guests and talented designers. The day is filled with the likes of GM performance exterior designer Tom Peters, to retired Ford Motor Co. advanced design team leader Freeman Thomas. 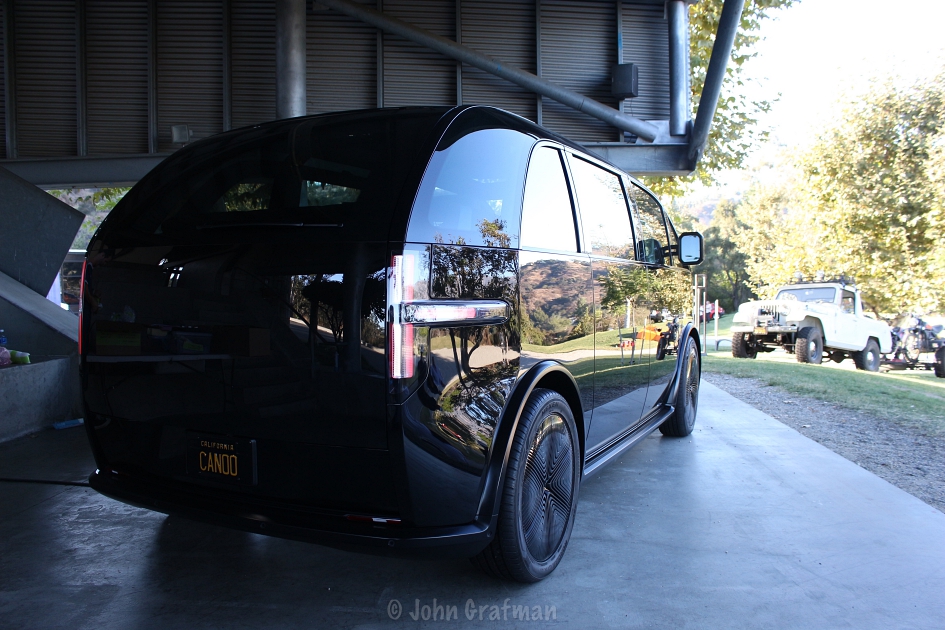 In addition, the open house at ArtCenter showcased the school’s offerings with demos in the shops and technical labs, plus tours of the campus offered for all attendees. The family-friendly activities range from a hands-on sketching workshop and a preview of ArtCenter Online, which recently piloted a six-week online course that delves into the basics of professional car design.

And, we would be remiss to not suggest that this is one of the finest collections of one-of-a-kind cars outside the Pebble Beach Concours. The selection on the hillside campus is hard to fully digest, as any singular car is a meal in itself. In the gleaming Pasadena sunshine sits the  extreme cab-forward 2005 AREX sports car that was designed and built by David Stollery (ArtCenter Alumni) of Industrial Design Research. Next to the AREX is the 1939 Bugatti Type 57 Cabriolet by Vanvooren with its flowing and graceful body, which is presented by the Petersen Automotive Museum. One could spend hours reviewing each of these or any of the other cars on display, but the enthusiasm is curtailed by the limited time available during the show.

On the field of dreams, the following are some of the standouts – 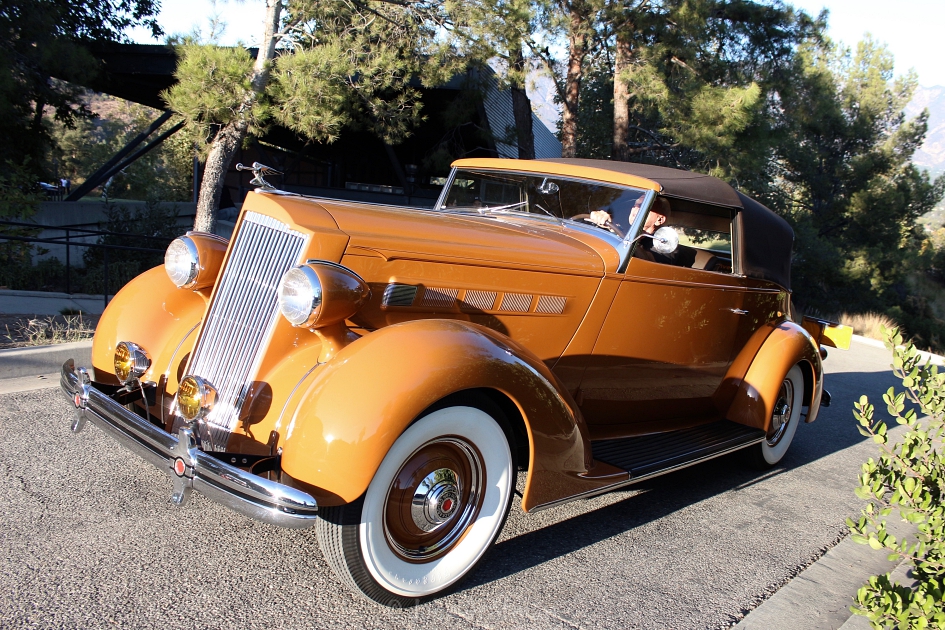 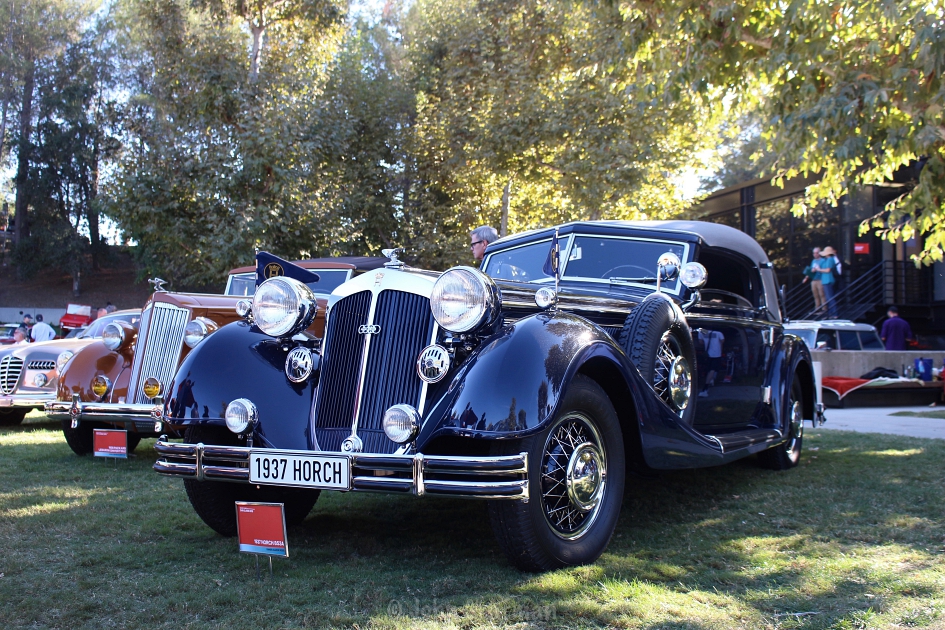 The College is grateful for support for Car Classic 2019 from event partners Fiat Chrysler Automobiles, Honda, Hyundai and Rusnak.

Flashback to the ArtCenter Car Classic 2018