With the passing of design legend and visual futurist Syd Mead, AutoDesignO is sharing our interview with him from the summer of 2010. In this conversation, Syd enlightens us on several forward-thinking ideas. One or two of these might be a bit “out there”… but you never know.

Mead was a mentor and a guiding light to transportation designers everywhere. He imagined a world in the future, one of optimism and beauty. His vision, in part, was being able to see what was possible and incorporating that in his portrayal of life in the years ahead of us all.

AutoDesignO truly appreciates Syd’s warmth and willingness over the years to share his vision with us.

AutoDesignO: You’ve done a substantial amount of design work for the entertainment industry. On those projects, what are you looking for conceptually, how do you get into that?

Syd Mead: Movies are stories, and regardless of the time frame that’s unique to that movie, whole stories, pretense; movies are worlds and they have all the stuff we have in a normal world. They have transportation, they have fashion, ambience and architecture. Because, otherwise you don’t have a visual. So, you approach it the same way.

Cars are characters… and I treat them that way – Syd Mead

If I was going to design a movie car, which is what I did for Blade Runner, about four of them, they are characters in that movie, and otherwise they wouldn’t bother to build them. They are characters and I treat them that way. And in doing so I use all the same design rules I was taught at ArtCenter fifty years ago to arrive at a solution that tells part of the story that car is about. Cars today – they’re different, but they’re still part of the story, [and] everything is over specified, and the rules are much more confining. 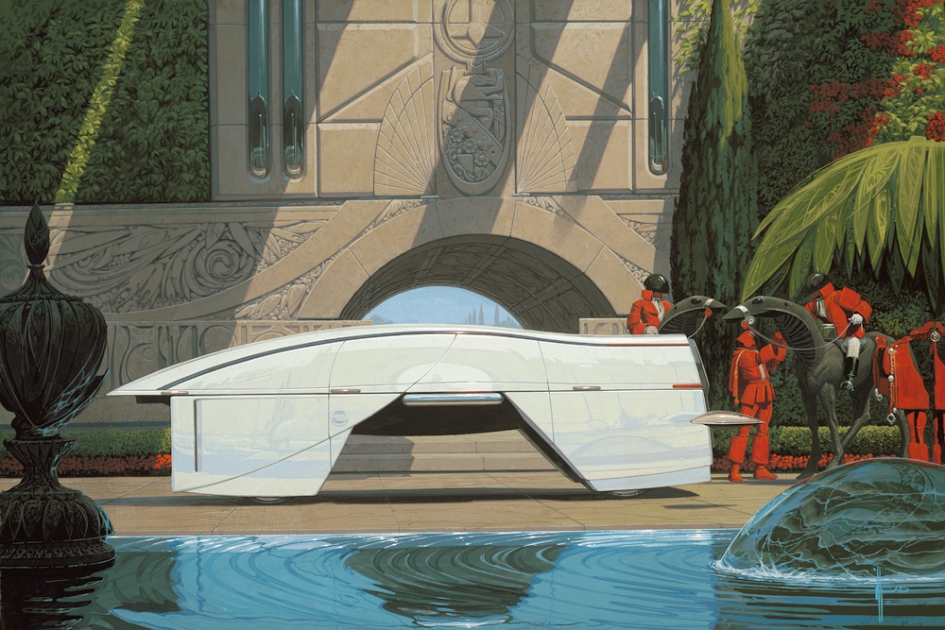 AutoDesignO: On the projects you’ve been involved with, you can really let your imagination go, because you can explore different packages for the vehicle, based on transportation drive components and people. Maybe we are getting a little sameness in vehicles we have today because not a lot has changed [for decades], although we’re getting a point where things are now evolving. Do you think we will see some different directions in design now?

Syd Mead: The automotive business is enormously expensive. So, you have a new engine, you have new technology, and the technology is now shifting perhaps to hydrogen. The interim is the hybrid gasoline powered small engine running an electrical generator and that sort of thing. Hydrogen is expensive to support because of the infrastructure. We really don’t have an energy storage basis for hydrogen yet. They’re working on it.

Oddly enough, the latest development is chicken feathers. It’s going to sound weird but stay with me. The poultry industry in this country has to get rid of hundreds of tons of chicken feathers per day. So, here’s what you do. I just read about this. In order to trap hydrogen for easy stripping and the feeding that into the motor system, you have to have some kind of service where you strip the hydrogen atoms off and put them into service. For that you need lots and lots of surface area. The nano-tube environment doesn’t really have that much surface. But, chicken feathers [from] mother nature – they’re carotene. So what you do is, you heat them up to about two hundred ten degrees Celsius. It oxidizes them but it sort of crystallizes them, then you let it cool off and you heat it up again to about four hundred. What you end up with are millions and millions and millions and millions of tiny surfaces inside each of the feather shafts, and you can put hydrogen in there. 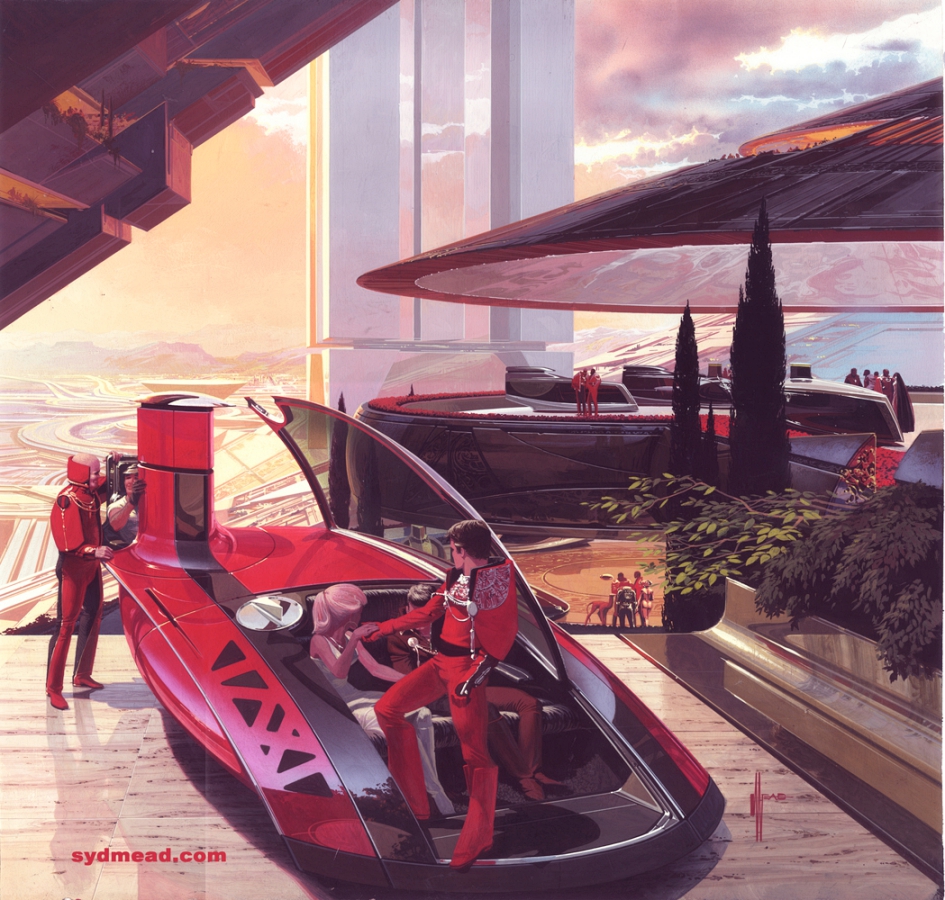 What they’re looking for now is, you are going cross country in your hydrogen powered car, you stop in and get a couple of capsules, pop them into the hydrogen feed area of the car and you’re off for another two or three hundred miles. When it gets to that the hydrogen-powered car will be successful and practical. Now it’s not.

AutoDesignO: So that’s the ultimate green car because not only are you using hydrogen, but also you are recycling chicken feathers. So, you are killing two birds with one stone?

Syd Mead: But, you can also drive a car by picking up grease at a hamburger stand, and process that. And you can drive a car on that. The nice thing is driving down the street you’re wafting behind you the smell of French fries, which is another beneficial thing (making everyone hungry). 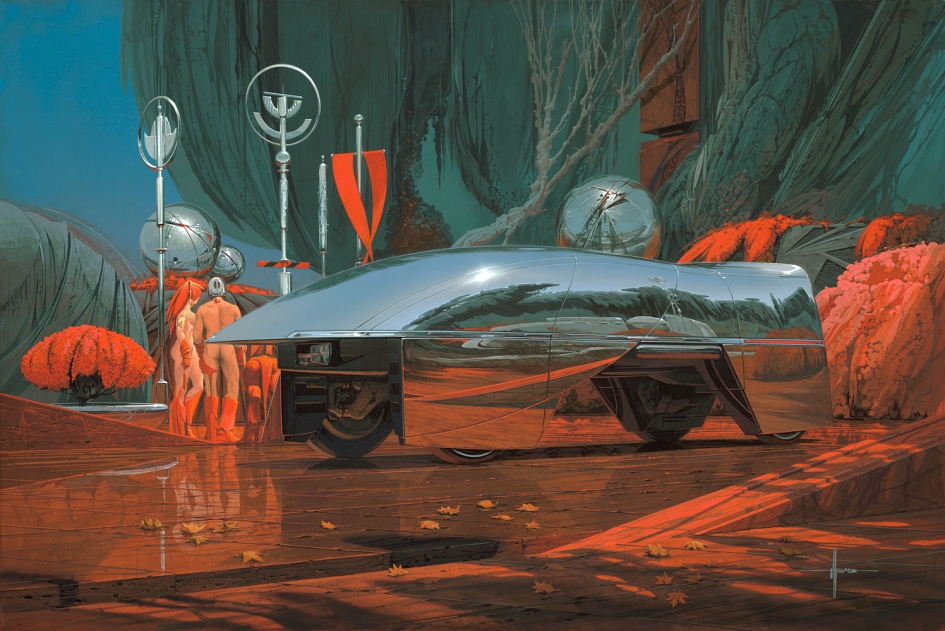 Cars today are not assembled in the same way that cars were since cars were being made. If you look at cars of the 50s, 60s, 70s, 80s, before the computer industry really took over the design process day, every piece of a car, headlight bezel, window frames, the fenders, the ornament, everything had to be made as a wood model or the body was designed in clay. And then measurements were taken, and the dies were made. Well, that meant the car was assembled from mechanically produced bits and pieces that produce the look.

You lose that assembled, visceral kind of texture so all the cars look pretty much alike

Cars today are done as a computer-generated envelope done in three-dimensional CAD. And then you map the door cuts, and the exterior detail, the light splits, all that is mapped onto this envelope. So, you get this amorphous kind of a bubble with some detail. And the detail assignment is critical because now don’t have to have really [have all the parts made in one place], you can have the tail lights made in Taiwan, you can have the doors made somewhere and it all really fits perfectly because it’s using the same 3-D data language to make the dies to make the part. But you lose that assembled, visceral kind of texture so all the cars look pretty much alike.

If you stripped most of the modern cars on the street of any of their badges, painted them all the same color, I defy you to pick out more than about two or three of them accurately. Because every time you don’t sell a car in the car market, you’re damaging the whole structure of the car industry of that particular make a lot. So, you don’t want to come up with something too weird. 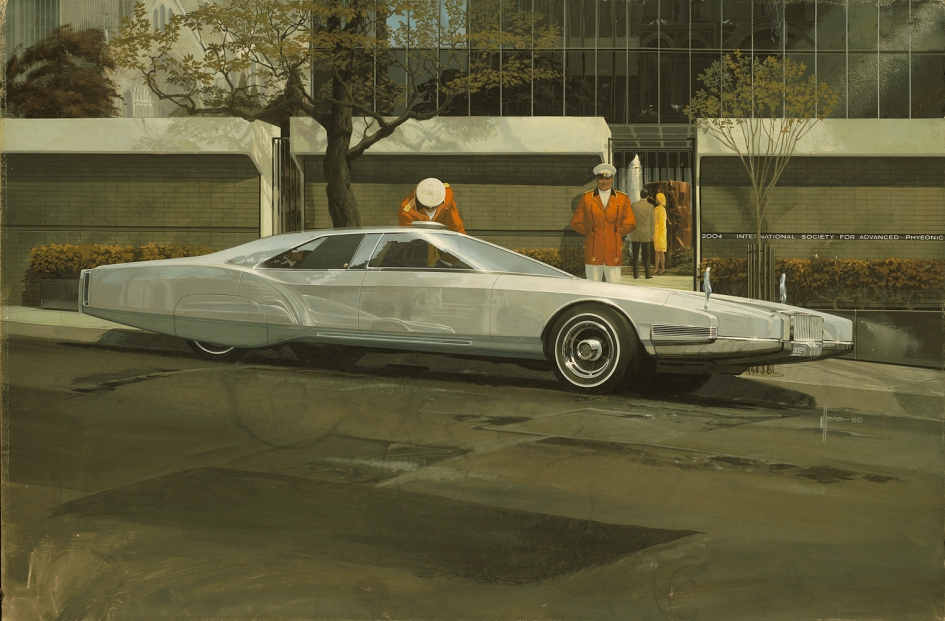 The new generation experimental cars, yes, they are very remarkably different, but the overall retail market car industry cars are a commodity. And when you go to the dealership, you can get a $4,000-$5000 cash back, they’re giving their business away because they have to get rid of the cars. And, lots all [around] the world right now, hundreds of thousands of acres of parked cars are not sold. The industry’s vastly over-built to produce cars. It’s not that difficult to produce cars anymore. I have great respect for the engineers and the engineering that goes into automobiles, but it’s not that difficult to make a car.

It’s not that difficult to produce cars anymore

AutoDesignO: Along those lines, rapid prototyping is like real science fiction stuff. Do you think we’ll see some of that eek anyway into way production vehicles?

Syd Mead: Well, what rapid prototyping gives you the opportunity to do is, you build a modular understructure. And then from the dealer you can essentially redesign your car for you. Rapid prototyping, however, so far are mostly for parts and appliance sized things like that. But, once you get rapid prototyping up to real large-scale stuff, you can customize your car at the dealership. And they could have a thing out back in the service area that will make whatever you want and that’s customization at the retail level on demand that’s a very fantastic principle. God knows what designs we’ll come up with.

Naiveté is nice, but once you past three [years old] it’s not really a treasured behavior. 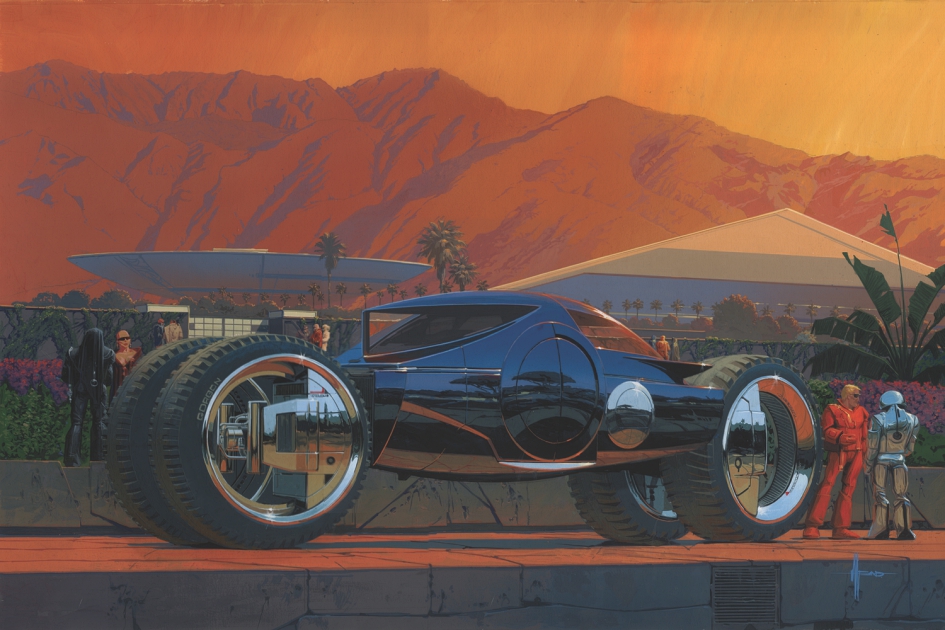