Strolling down the lanes at Anaheim Convention Center, it’s clear that NAMM comes alive with artistry and music. The production models of even the humblest guitar, amp, or set of bongos are curiously interesting. Yet, it’s the custom made instruments really pop. The thrill and passion one feels in an off-the-shelf model pales in comparison to a one-off. There are two types of people in the world; ones that say why would you do that to guitar, and the others that say why wouldn’t you?

AutoDesignO is fortunate to track down Andy Powers of Taylor Guitars and Steve Smith of Marshall Amplification Plc. Both shine a little light on what it’s like to take a walk on the wild side with a custom design.

Images and interviews by John Grafman

Andy Powers: I design what we make. So, I design the guitars, build them, figure out how to make them. And, then I’ve got an incredible manufacturing team that helps actually produce these wonderful instruments that people get to play. 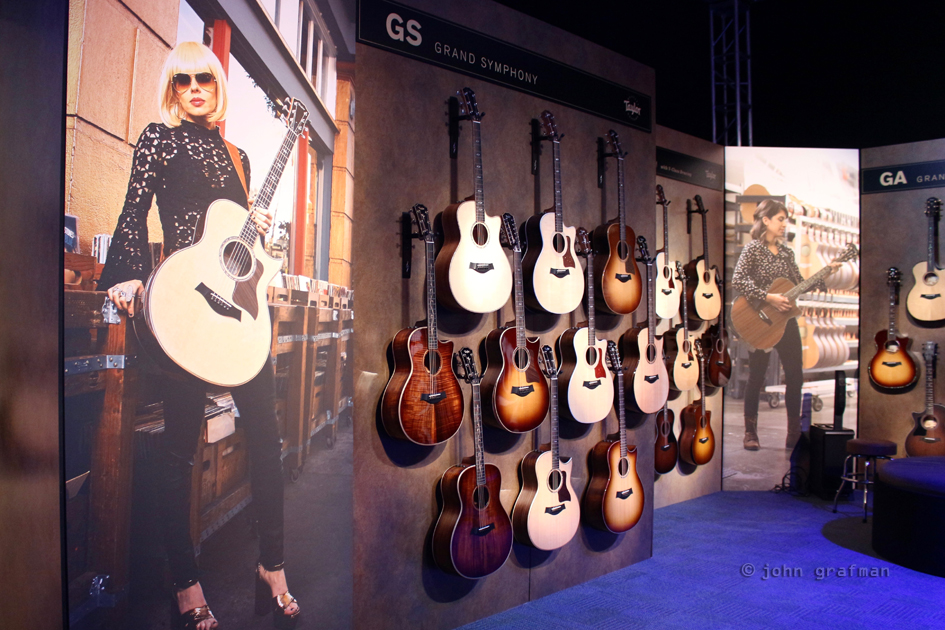 AutoDesignO: Andy, can you tell us a little bit about some of the aesthetics and choices you make?

Andy Powers: The guitar world is fairly traditional. I mean we’re building on a tradition that goes back centuries. So, our aesthetic has a certain traditional component. A lot of that aesthetic was driven by the materials that we use. Primarily, string instruments are made with wood. Now in some ways it seems a little archaic, with the proliferation of all kinds of carbon fibers, composites, synthetics, all this stuff. But the reality is, wood is priceless… but only because it’s so cheap.

We’re building on a tradition that goes back centuries. So, our aesthetic has a certain traditional component

If we were to try and devise a material that was as miraculously complex and multi faceted as say a piece of spruce, or a piece of maple, no one would be able to afford it. It would be so utterly difficult to contrive something that does all of what this material can do.

Many of the materials that we choose, we use specific pieces of wood, for different components of the guitar. Because every component, just like in a car or a lot of other (industrial) designs, every component has a very particular job to do. Has its role to play. And often times that role is right on the very margins of what these materials will allow you to do. 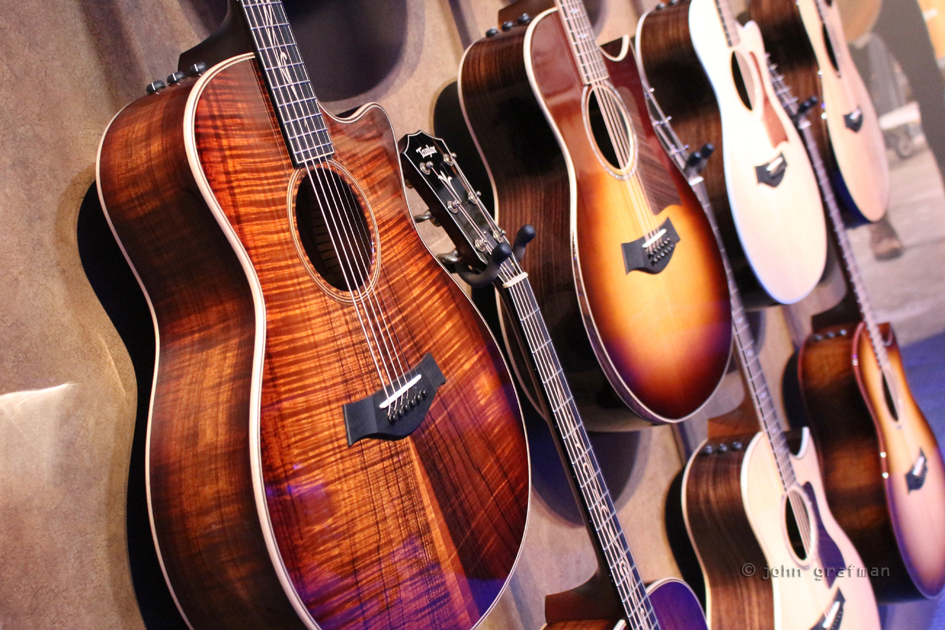 The conventional wisdom is ‘A great guitar, is right on the verge of breaking apart’. It’s kind of like a motor that’s been blueprinted, bored and stroked, all this stuff to get it really, really right at the edge of what that thing will do. You wanna get that redline up as high as you can before it blows apart.

Well that’s kind of what happens with guitars. It’s a very unique branch of woodworking that’s brought to this level, in order to be expressive and dynamic for the musician.

ADO: And some of the choices, because of the variety, how do you go about making specific decisions?

AP: A lot of it is built on experience. So you learn what the materials do, what their nature is, what their character is. And you’re asking each piece to do what it wants to do best.

So say for the top of a guitar, probably 90% of the guitars that I’ll build are going to have a type of wood that came from a coniferous tree. So, a tree that looks like a Christmas tree, has needles, it doesn’t drop them in the winter, that kind of tree. Because those trees grow with a very specific structure. So when I take that piece of wood, it has an ultra, this perfect strength to weight ratio. The right amount of dampening, the right resonance, the right weight, everything is in that Goldilocks zone, that just right type of material. 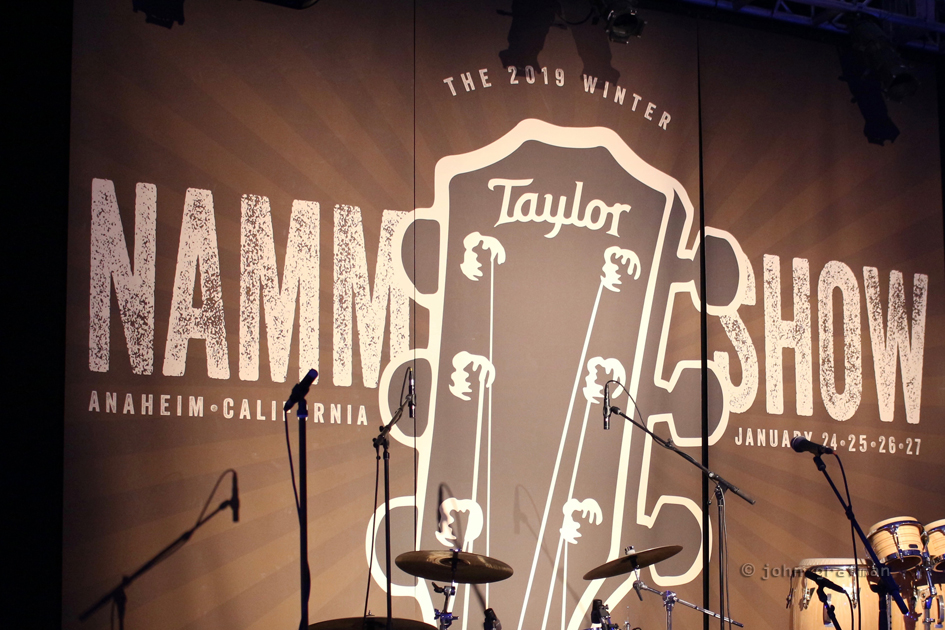 But that wood would never, ever do for the back of a guitar. It’s completely wrong in that case, you need something with a far different dampening characteristic, different resonance, different density, different weight. So everyone of those pieces, you have to learn the materials that you’re working with, and then ask those materials to do what they naturally want to do. That’s when a craftsman will be successful.

ADO: Because of your work with Taylor, do you have a different perspective on the world around you, as far as materials and so forth?

So it’s not simply, go find a place that has a bunch of trees, cut them down and take it. We can’t do the rob and pillage thing.

AP: Yeah absolutely. At this point, we’re one of the largest guitar manufacturers worldwide. With that comes a huge responsibility to be utilizing these resources in an ethical, moral, ecologically sound way. So it’s not simply, go find a place that has a bunch of trees, cut them down and take it. We can’t do the rob and pillage thing. That’s the way our industry has worked for a lot of years unfortunately and that’s not a healthy way to live now.

So we embark on a lot of projects worldwide to replant forests, to propagate trees for future generations of use. In a way that’s almost like farm to table guitar making. So there’s a lot of thought and a lot of effort going into restoring forests and finally farming materials specifically for instrument usage. 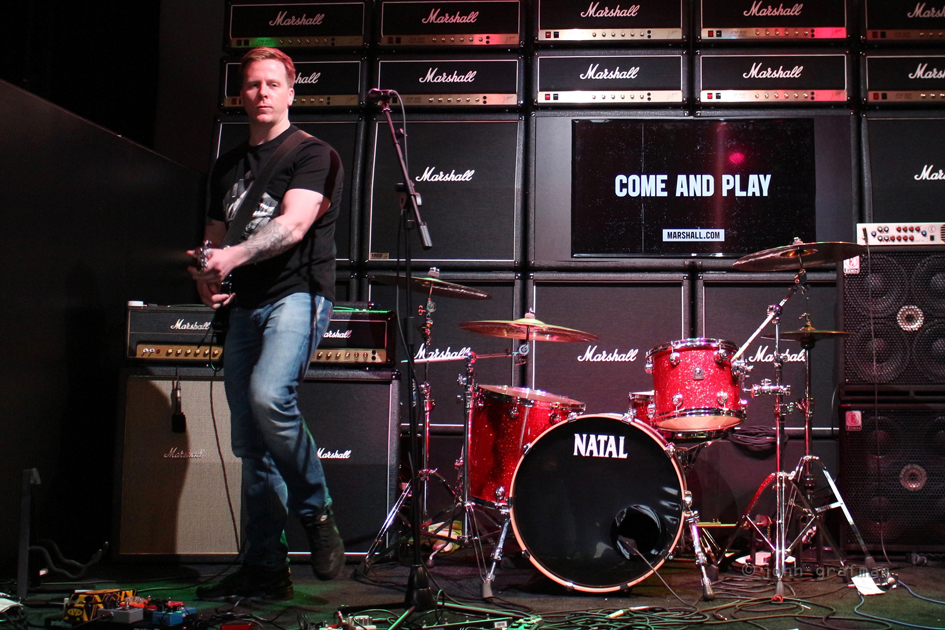 Steve Smith: We’re at the NAMM show, and we’ve got a whole range of custom amps that we’re doing. And they’re all one-offs. All the money’s going to charity. It’s an auction, a silent auction.

And what we’ve done is taken some of our classic, sort of known amps, well-known amplifiers, but made them kind of unrecognizable. So, we’ve done custom finishes and we’ve done all kinds of different things, so for example, we’ve got one that’s finished with car paint, we’ve got another one that the fret cloth’s actually the curtains from the Marshall Theater, which is our famous venue. Yeah, and we’ve had a cabinet maker do some of the woodwork, all that kind of thing. 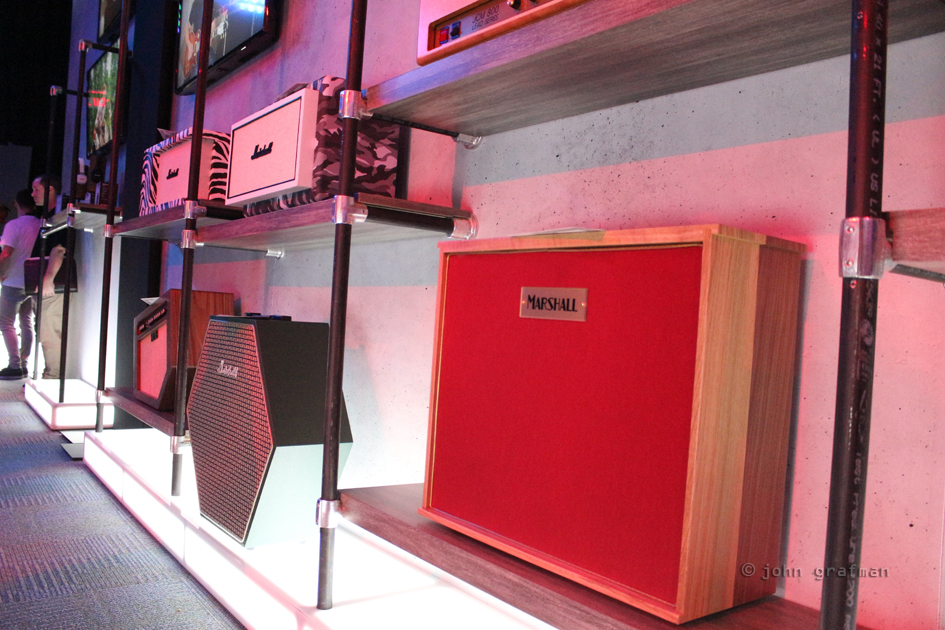 AutoDesignO: As far as the aesthetics go, there is a wide range here. Was there any particular goal?

Steve Smith: No, no, you know what? We decided, … obviously, some of the looks had to fit with the design of the original amplifier physically, but no, we just wanted to go kind of retro with some of them, ’cause some of them literally look like they’ve been made out of old cabinets. But them some of the look really futuristic, so yeah, it’s kind of just let’s see how crazy we could make the amps look.

ADO: So you do have an R&D department there?

SS: Yeah, yeah, yeah, they just sit there all day drawing these things up. There was some ideas which obviously, we didn’t bring to the show because they were just a little bit too crazy or too quirky. We just went with the majority decision on the ones that people liked the look of. 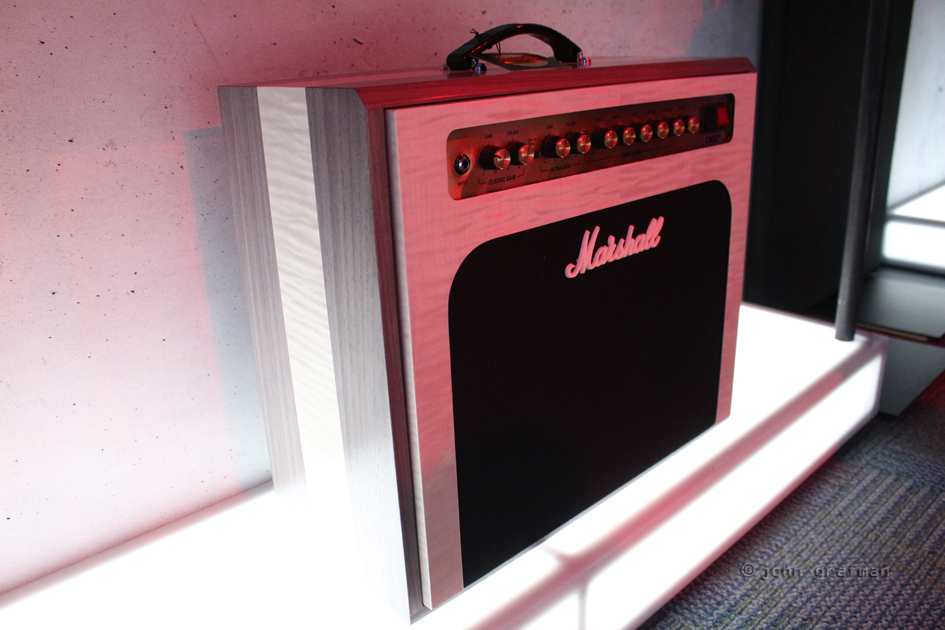 ADO: By doing this, does it give you a little bit of feedback as far as what the public might gravitate towards in the future, as far as future product design?

SS: Yeah sure, I mean, obviously you get the guy who just wants an amp to look like an amp, doesn’t care about any of that kind of stuff. But, we’ve realized actually people are really interested in stuff that looks different. So the people have been gravitating towards this side of the show. Even though they’re not new amplifiers or such, just the fact they look unique.

ADO: And the traditional amps look, well everybody’s seen them. Is there possibly a different market that one could envision by looking at some of these (one-off amps)?

People have been gravitating towards this side of the show. Even though they’re not new amplifiers or such, just the fact they look unique. This is why NAMM Comes Alive.

SS: Maybe, but it’s some thing that we’ll never do production runs of. I think we’ll always do this kind of thing. But, these won’t be made ever again, these particular ones, these are all one offs, we’re not gonna ever redo these ones. But back at Marshall HQ (England), we do have a design store where people can have one of our existing amplifiers in a custom finish, custom colors, they can put graphics on them, on their grill cloths, all that kind of things. 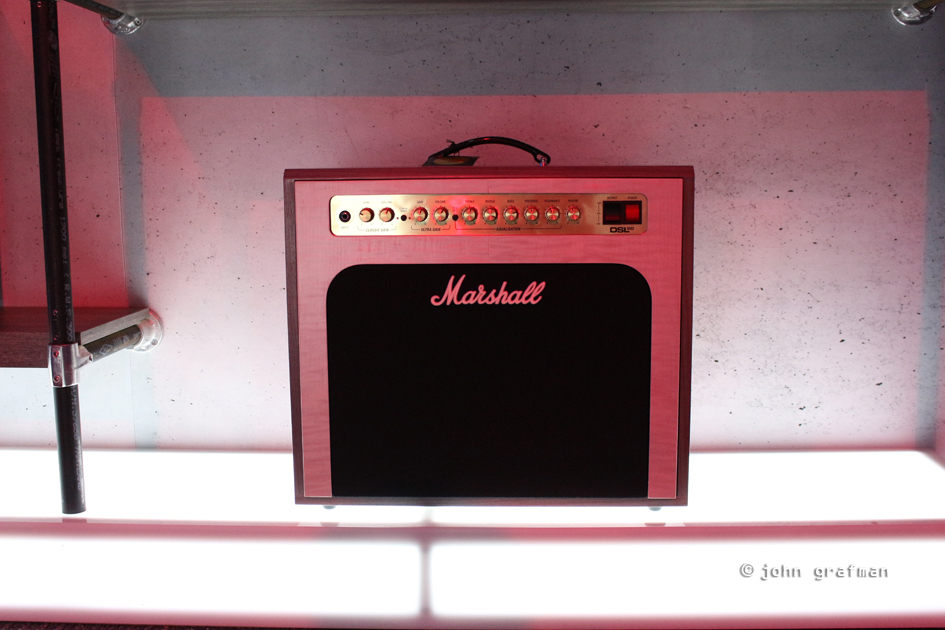 ADO: So, you can bespoke an amplifier kind of in the same way you can a Bentley or a Rolls Royce?

SS: Yes, exactly, yeah, yeah. So, they can have their own one-off looking plexi. The amp’s the amp, but it’s personal to them.

ADO: How long can somebody expect to wait, from the point they say, “I want this”, to the point that they take delivery?

SS: Usually they can draw ’em up pretty quick. But it honestly depends on the waiting list. Like I know at the moment, I think to have anything refinished, you’re looking at about eight weeks.

ADO: And how crazy your imagination is, I assume?