The LA Auto Show brings a bevy of new products to the convention center floor. As one could predict, there are ample sport utility vehicles, alternative energy transportation debuts, and numerous concept cars that leave many bemused over what design staff was thinking. So, when Acura showcases the new Type S Concept, a normal yet strikingly attractive sedan, well, that stands apart from the masses.

A few factors punctuate the design and catch our eye. The narrow headlamps are giving the design team more body surface to work with. Clearly, this is noticeable in the front face of the Acura and along the front fenders, creating a visually longer and stronger front by avoiding oversized lenses. Perhaps the detail that most intrigues is the use of flake carbon fiber in several areas rather than the typical weave, which is now getting long in the tooth. 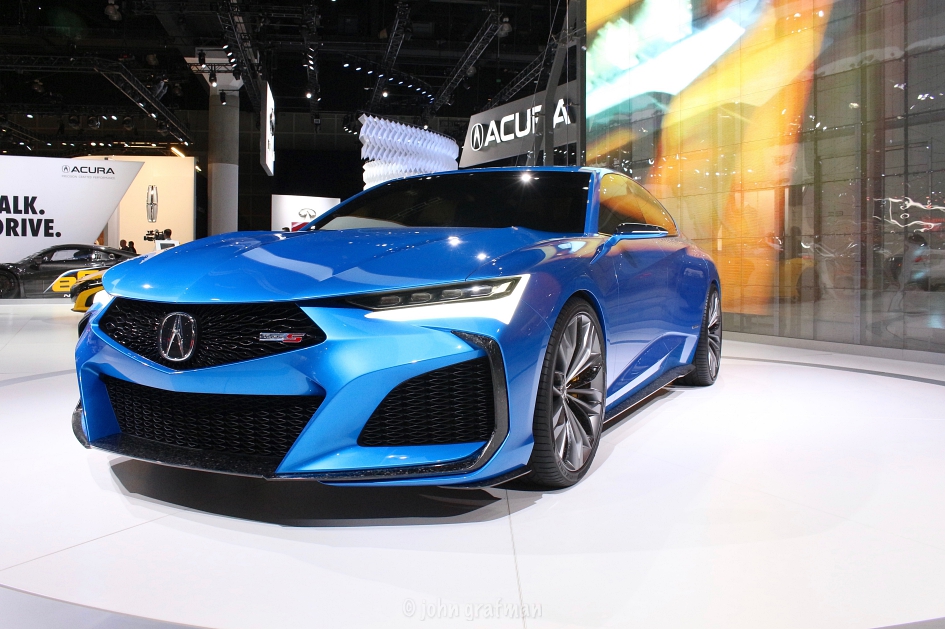 Not only does this concept catch our attention, but it does with other show attendees. As we are chatting with Dave and Ben, along comes over Hélio Castroneves. True, the Brazilian race car driver is on the Acura Penske Team, but it’s clear that his attraction to the Type S Concept is genuine. And, as those that know Hélio can tell you, he doesn’t hold back on his emotions. This is his first-time laying eyes on the gleaming blue concept. Hélio is in love with it! Then, Castroneves asks an honest question that sadly underlies our basic concern, “Will this remain the same in production?”

The Acura Type S Concept will heavily influence the next TLX

The rest of us knowingly smile. The likelihood that this will unchanged to some degree as it transitions into a legal street car is close to zero. However, the Type S Concept, as we see it today, is a worthy target. Now, it’s up to Acura to deviate as little as possible. Davidson tells us, “This will heavily influence the next TLX.” How much influence has yet to be seen, so for the time being we will take Ben’s word for it.

Perhaps the bigger question is, will we see more of the premium character of the Acura Type S Concept shining through into the rest of the product line?

Dave Marek says, “Yeah, absolutely. I think as you go up in the hierarchy, you get a little bit more finesse. And when you go lower in the hierarchy, so RDX or the ILX or one of those, you try to inject some more youthful sportiness but also still tasteful. But, first is performance. If you make it feel like it’s performance, then you probably don’t need to do a lot of stuff.” 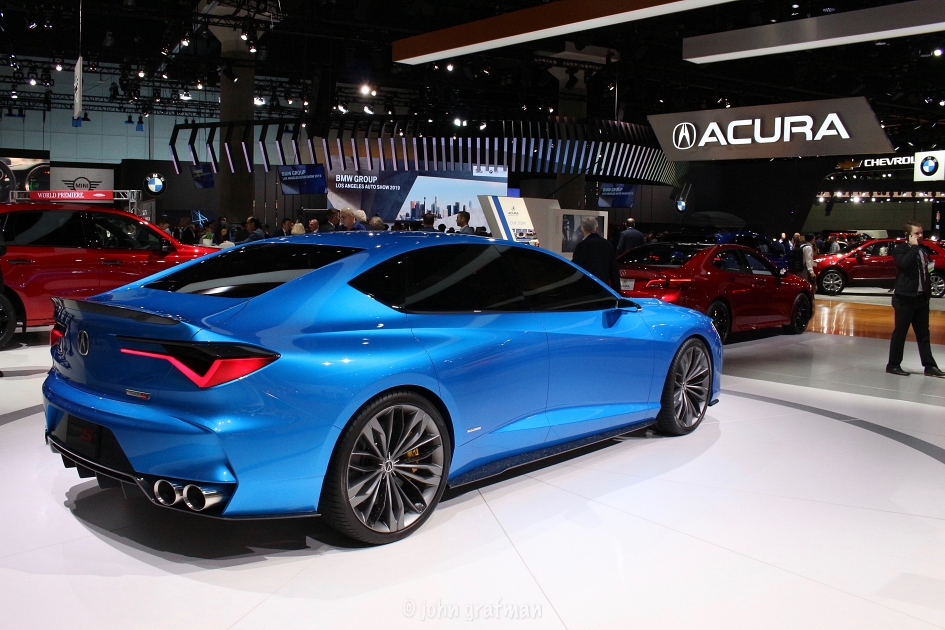 John Ikeda, Vice President and Brand Officer- Acura Brand Office has been quoted, “Precision Crafted Performance is the future of this brand, but it’s not a destination. It’s a mindset and a commitment to doing new and challenging things based on our own unique ideas for our customers.” It’s hard to not see John’s vision being realized in the Acura Type S Concept.

Both Dave and Ben offer a few additional thoughts on the Acura Type S Concept.

Ben Davidson:  The Type S continues with the Precision Concept style and performance image but injects a bolder performance element to it. This really wants to highlight and, I guess, lead the way for Type S models in the future. Also, it will heavily influence the next TLX model coming out. I think this is just an exercise in our alluring, contrast design language. Yeah, we’re really excited that we’ve been able to put this together for today (at the LA Auto Show).

AutoDesignO:  It’s definitely a sexy design. Ben, can you tell us a little bit about the body and how that was derived? 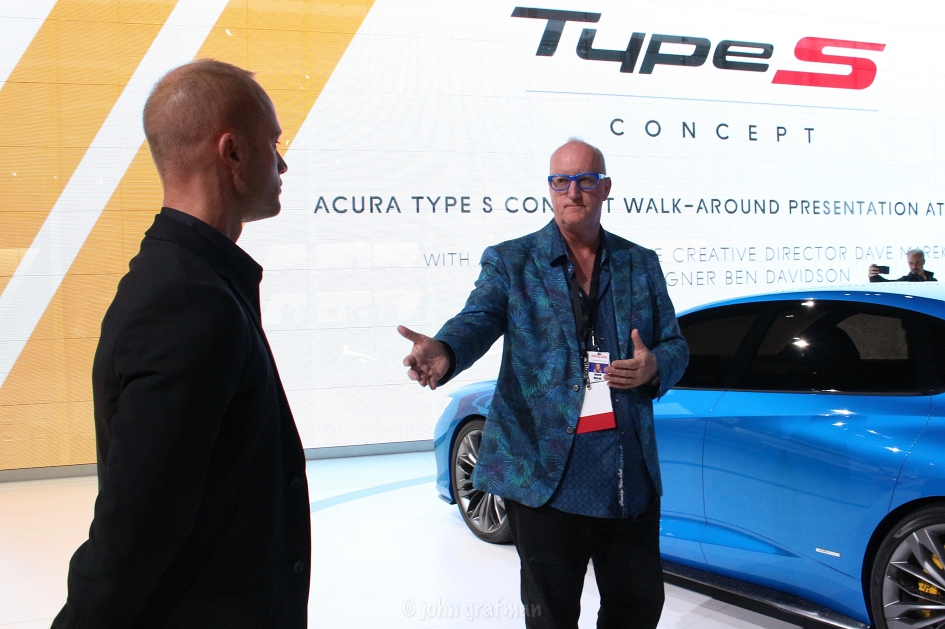 But we’ve basically taken it one step further and made it more of a form follows function, performance-focused design. That car was more performance, luxury and style. This is more aggressive performance.

AutoDesignO:  What are some of the takeaways in the Type S Concept design that you hope people gravitate towards?

Ben Davidson:  I think one of the major things for us is our new frameless construction grill, which now the mesh is an open diamond mesh and it’s more inset. I think this really highlights the performance of the car, and of the look. Also, our dash to axle proportion is a performance proportion; rear-wheel drive or rear cabin, and more. I guess, dramatic and more movement in the side view. Also, our quad exhaust I think is something that you’ll see in the future for Type S models. 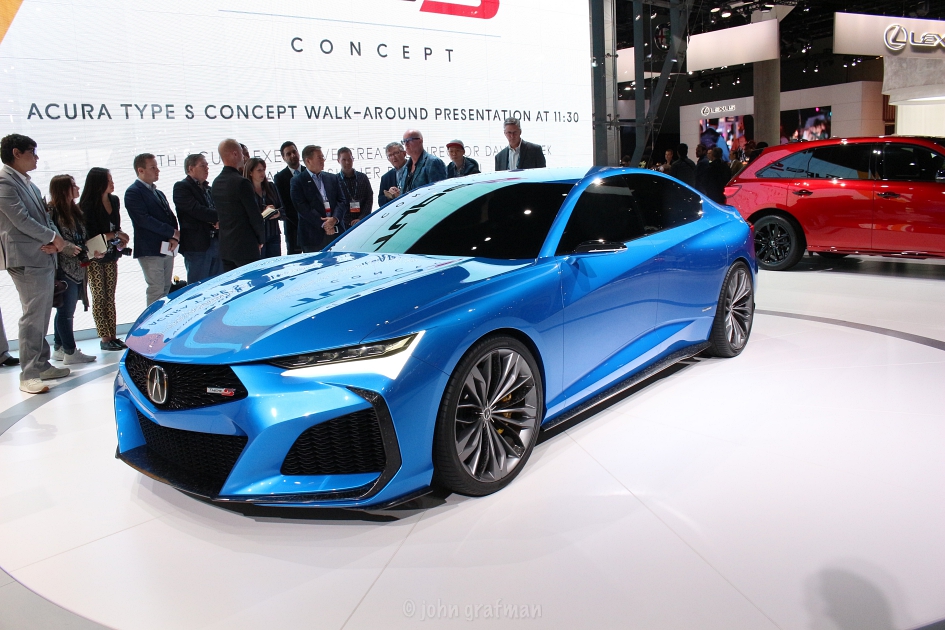 Dave Marek:  Yeah. A lot of pieces doesn’t mean it’s sporty. That just means it’s more youthful, I guess. But the emotion from us is more of the contrast surfaces and kind of the shape running through. You know, it’s tried and true to do wheels at the corner and haunches that feel animalistic or something. That’s the direction. I probably was skewing more towards emotion on the RDX, just so that people understood we’ve changed. You know, it’s less simple than this, but the direction is to be clean like this. But, still we need to make our mark. It’s not that we’re irrelevant, because our customers love our car. It’s more that we needed to make a more emotional statement.

Read more on what DAVE MAREK thinks about racing, AI, the NSX, and all things Acura.