Just in case you didn’t get the message, the 2020 Toyota Supra is the fastest car in the brand’s line-up. Also, this is the quickest of any production car Toyota has manufactured, ever (excluding the Lexus brand, of course)! That’s no small accomplishment. Sure, design is supposed to be the focus here, but to not involve performance is a disservice to the conversation, as the styling should in some way relate to the intent of the vehicle.

This particular Toyota showcases 335-horsepower, which doesn’t exactly sound earthshattering for a sportscar in 2020, but it almost is. And, 365-lb.-ft. of torque at 1,600-4,500 rpm is also healthy, but not class-leading. Fortunately, the Supra’s ZF 8-speed automatic transmission is able to make the most of the power that the 3.0-liter, 6-cylcinder offers up. In this case, that’s a perfect combo. This translates to a 4.1 second 0-60 time, and worthy of being a true sportscar.

It’s hard to talk about the Supra and not mention it’s close relative, the BMW Z4. Both share platforms, drivetrain, and much that goes unseen. The difference lies in the body and interior design. Hence, we won’t be talking about the BMW too much. 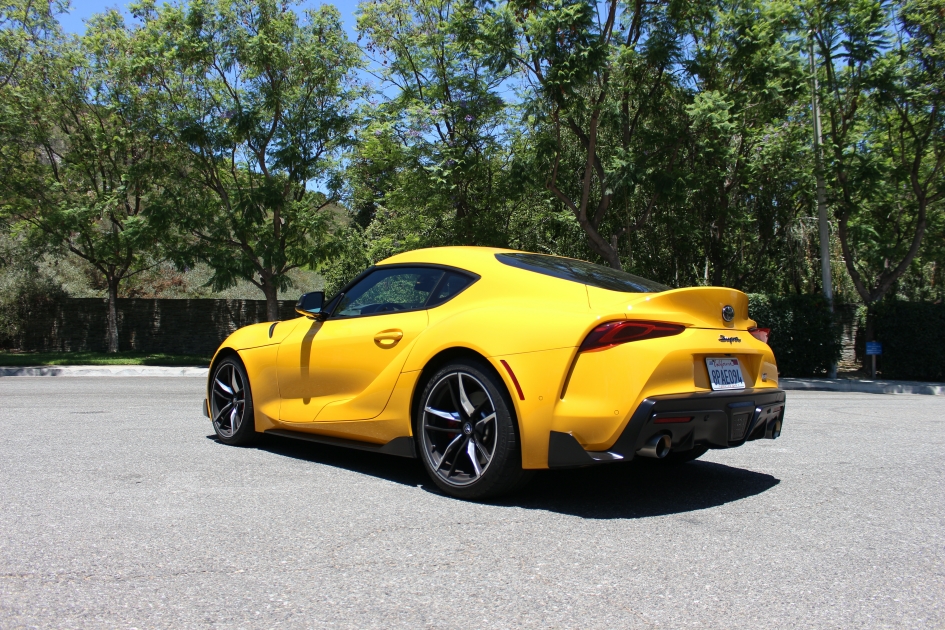 The origin of the 2020 Toyota Supra’s style is found in the 2014 FT-1 concept that debuted at the NAIAS. Arguably, there are whole-heartedly good features in both the concept and production car. Questionably, is how it all interconnects in this car today.

To start, the F1-esque nose is distinct and does remind us of Toyota’s racing heritage. Major-league intakes in the front bumper would make a hoover vacuum jealous. The bulging rear fenders are a blatant slap in the face of the blasé to wake up and pay attention. The narrowing rear and ducktail provide the visual punch that says, “I am a force to be reckoned with.” Even the logotype badge says badass!

Happily, the performance is complemented with a vibrant design. From a conservative company looking to find its way in a too trendy and often confused world, the Supra makes a good splash into the sportscar pool. But, it’s not a cannonball. 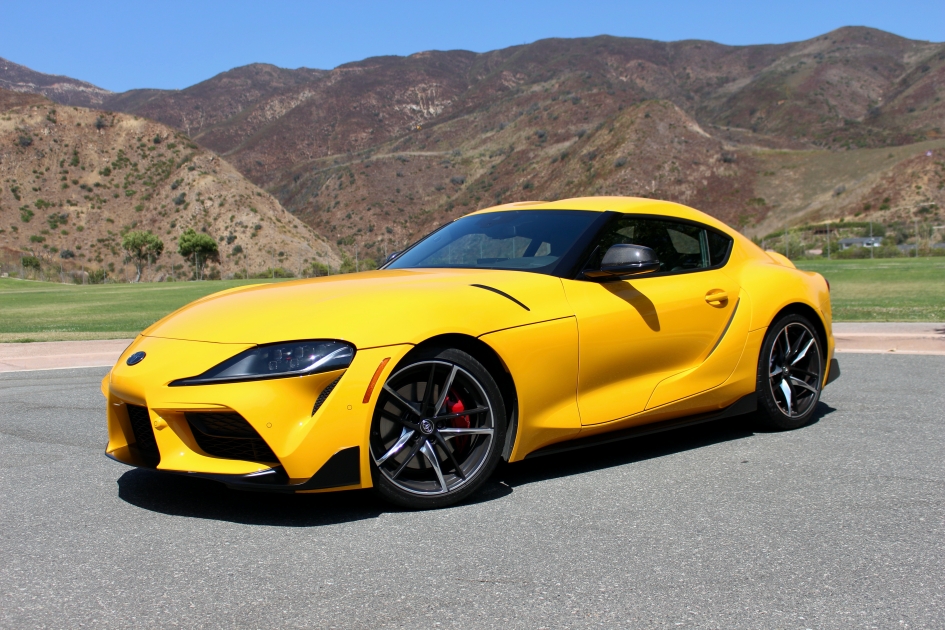 The birth of the model dates back to 1978. Toyota has allowed the Supra to advance without being a design that’s beholden to the prior generations. Toyota does not follow the Porsche model of constantly evolving, rather this is a rebirth anew.

Reinventing The Design Of The Supra

There is a lot of activity in the shapes of the body panels from the front to the rear, especially in a relatively short length of 14’ 4”. At the top, the double-bubble roof panel is a nice tip of the hat to those who wear a helmet for a living on the racetrack. It does yield a bonus in headroom, albeit slight. More importantly, it is just a little something extra. A visual treat for the eyes, if you will.

The doors and adjacent fenders are curvaceous, and nearly overindulgent in form. It does send a message, this is anything but boring, so be prepared to be excited! Thankfully, Toyota fulfills the promise of design with actual street cred. 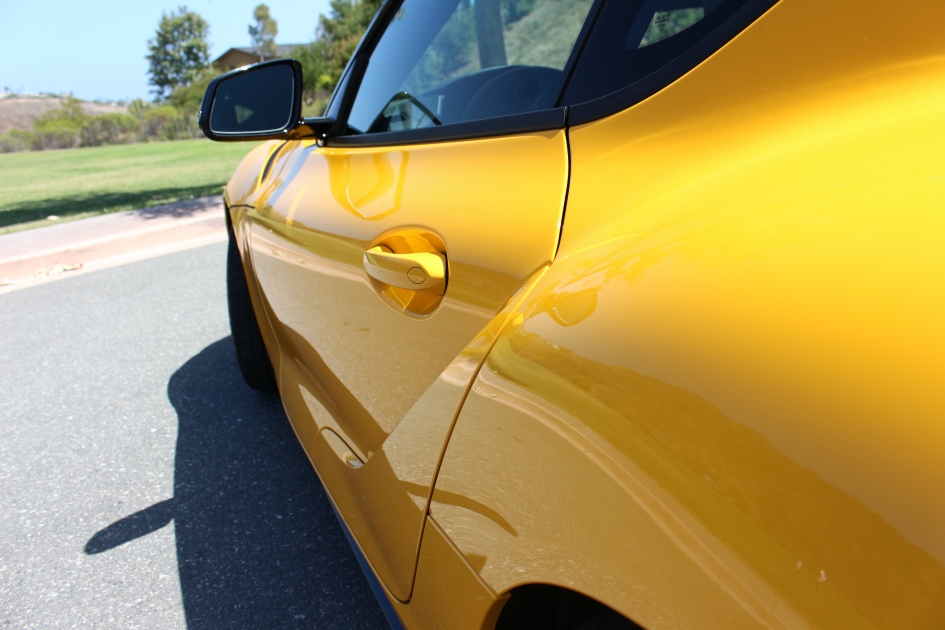 Now, a few design cues dial this back from an outright ten. The vents on the fenders and hood are fake. Maybe the Supra could have actually had functioning air intake and extractors, but it wasn’t in the cards. And, as a result, the honesty and potential invoked with the other features is forfeited as a result.

The hood does seem to be lacking, aside from the previously mentioned F1 tip. Just past the headlamps, what follows up to the base of the A pillar and flowing off the sides to the fenders feels kind of generic, or ambivalent to the rest of the shape. It’s like a bar of soap that has been used for about a week. One could say, it’s not bad design as much as it is blah design – neither good nor bad.

While the hood detracts, it does not spoil the totality of the Supra. This is a car that owners will want to wash and wax themselves, just because it’s such a luscious form. Even the wheels are wonderful to gaze upon. The alternating chrome and black, organic-looking spokes, if nothing else, look expensive and suited for a performance product. The open design should allow ample air flow in for brake cooling. 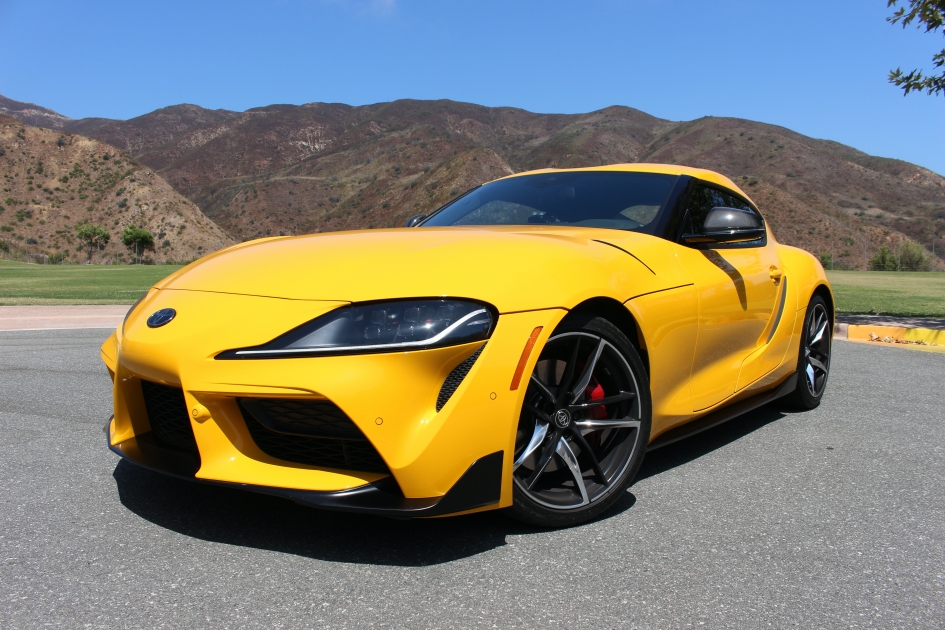 The design was not compromised, or at least as much as it could have been. The tapered rear glass panel eats into the interior storage in the hatch. However, this shape does accentuate the bulging rear fenders. It also creates a unique greenhouse, so this does stand apart from the crowd.

Big Things In A Small Package

Toyota got it right with a wide variety of surface variation and edges, providing dramatic shapes in a range of lighting situations.

Easing into the cockpit is a bit of a challenge, as clocking your head on the roof is a near certainty, until you start to remember to duck first and then slide in. Not exactly what one might expect from a Toyota, but in this case it’s a good thing. Well, not banging your head (unless you’re into that sort of punishment) but having a semi-low door opening signifies this is a real sportscar and not you parent’s sedan or SUV. 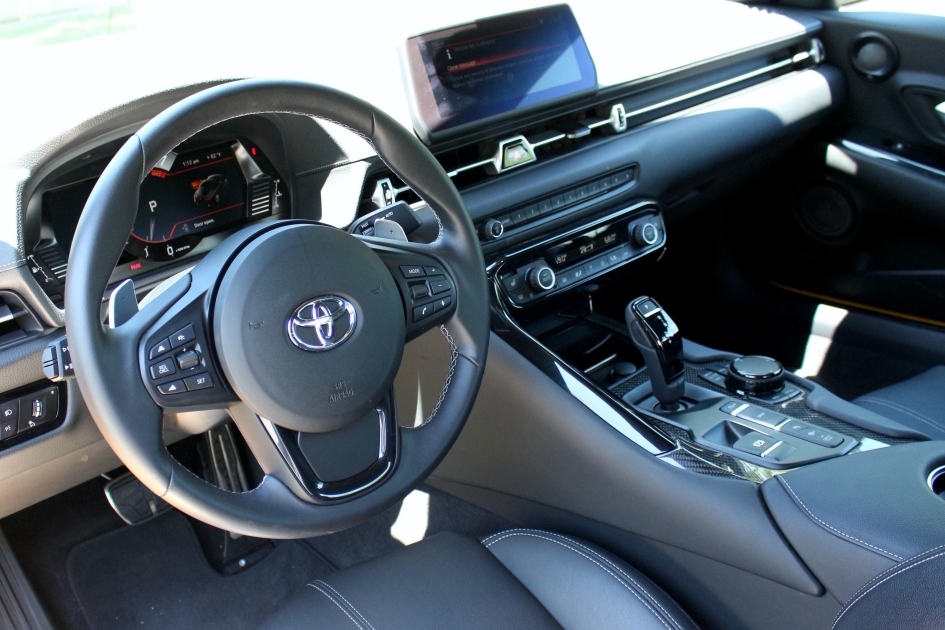 Once inside, the interior is an intelligent layout, but less risky. It really doesn’t take a JPL computer engineer to operate functions. Indeed, Toyota does an effective job when it comes to ease of use. The 2020 Toyota Supra makes me think of the Mazda MX-5 (Miata). The Miata and the Supra have a similar interior look and feel, literally. Both two-seater cars have a tight cabin (the Supra at a total exterior width of 73.0” and height of 53.0”, and interior headroom of 38.3”, shoulder room – 54.4”), a linear dash, and a fixed tablet-like screen in the center.

The use of plastic surfaces is a bit more than one would hope for at this price-point (a base 3.0-liter starts right around $50K). And, the monochromatic color does little induce the same level of passion the exterior offers. As this is the just the first year on this generation Supra, Toyota has years to enhance the look and feel of its top-of-line coupe.

The ease of use and down to business approach, is straight-forward and will be appreciated by owners. We’re guessing that’s the decision made by the studio heads. 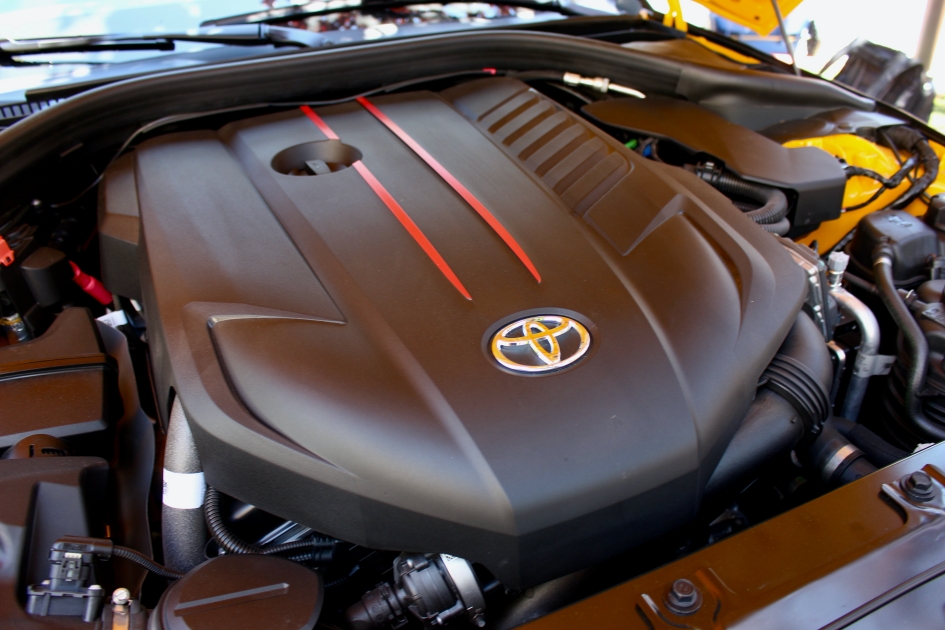 So, does the 2020 Toyota Supra walk the walk, because the boisterous styling talks the talk? That depends on who you speak to. The seating position is further back than most cars, to the point it feels similar to riding astride the rear axle. Personally, I prefer being far forward, like in the Audi R8 or Lotus Elise, as both offer a front row seat with an unobstructed vision of the road ahead. The Supra does offer excellent seat of the pants feel. Every bump and twist radiate to the seat and informs the driver. This is not painful, but rather a smooth and constant reminder of each undulation the car is performing.

The Supra Is One Lively Machine

The 2020 Supra has ample power to get the rear twitchy, even at speed, in part thanks to an 11:1 compression ratio. The 3,397-pounds feel like it’s biased towards the front of the car. So, paying attention is a good thing. It’s small and able to weave and parry through traffic effortlessly. The Supra is able to thrust forward in a blink, especially with 8-speeds from which to choose. This multispeed transmission car has an EPA rating of 24/31/26 (city, highway, combined).

Open highways are good for autos that can’t cut it in the twisting, narrow roads. In a nod to the potential abilities of the car and the lack of race car experience of your fearless reporter, the canyons of Malibu offer the ideal testbed. The stretch along Piuma Road from Las Virgenes (Malibu Canyon Road) heading southbound over the crest of the Santa Monica Mountains is wonderful for this purpose. The Supra takes the steep ascents, descents, frequent hard blind-turns, and short straights with aplomb. 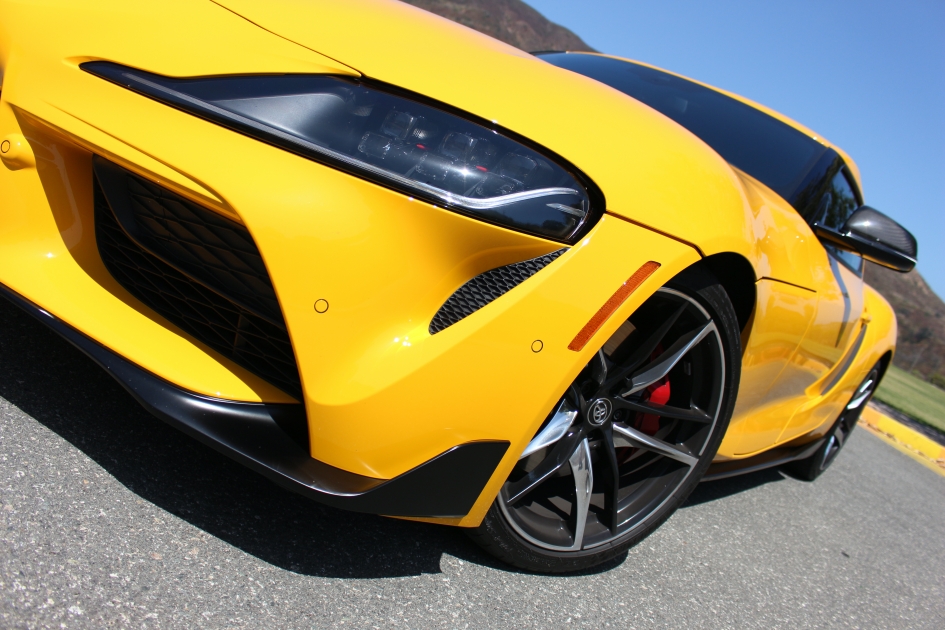 The driver’s feel of the steering, brakes, and suspension are all confidence building. Front brakes are 13.7” ventilated disc brake with Brembo® 4-piston fixed calipers, and the rear are 13.6” (or 13”) ventilated disc brake with a single piston floating caliper. No doubt, the Michelin Pilot Super Sport contribute greatly to the handling and stopping power with 255/35R19 96Y up front and wide 275/35R19 100Y tires in the rear.

The front suspension is comprised of double-joint type MacPherson strut, while the rear is multi-link with a five-arm construction, with stabilizer bars front and rear. The lightness of the rear-end does create a bit of nervousness. It can swing out with no problem, if the driver provides the correct (or incorrect) input. Hey, I’m no DK, so I keep it on the civil side. 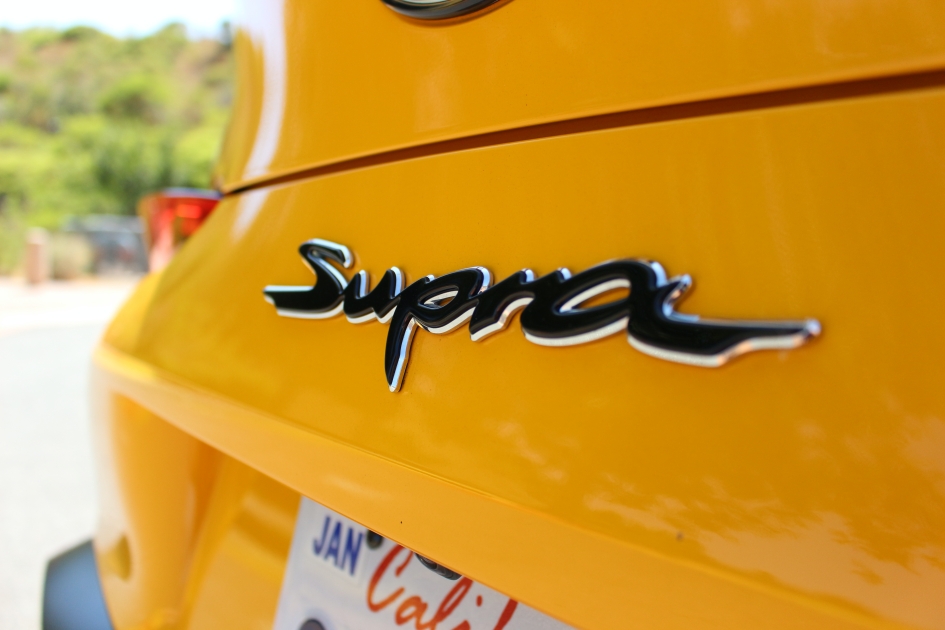 It is rewarding to see Toyota did get the balance right with a can-do machine, and a design that matches. One wonders, what would this be like if under the hood Toyota could stuff 400-hundred horses? Well, maybe a bigger spoiler too would be just right!