Miata Magic / Getting Way, Way Down!

Home/Articles/Miata Magic / Getting Way, Way Down!

Miata Magic / Getting Way, Way Down!

Review and images by John Grafman

One in a million. That term has special meaning at Mazda, as the one-millionth Miata MX-5 comes across the assembly line.

As a result, anyone who knows anything could tell you what a Miata is. And, when it comes time for a redesign that is indeed part of the challenge. As with most well-known stories, at some point there is a need to keep it fresh, but familiar. The sage of the Acura NSX, Camaro, Challenger/Charger, Mustang, and the Ford GT all have this same obstacle. Each company has to make its own decision on just how far to move the design needle.

For Mazda, the choice was between having a sporty car or a sports car. Beyond a doubt, the engineers did their job, and did it well. Of course, this is subjective. However, if the target was to create a quick and agile, and affordable convertible, Mazda hit the bulls-eye dead on! 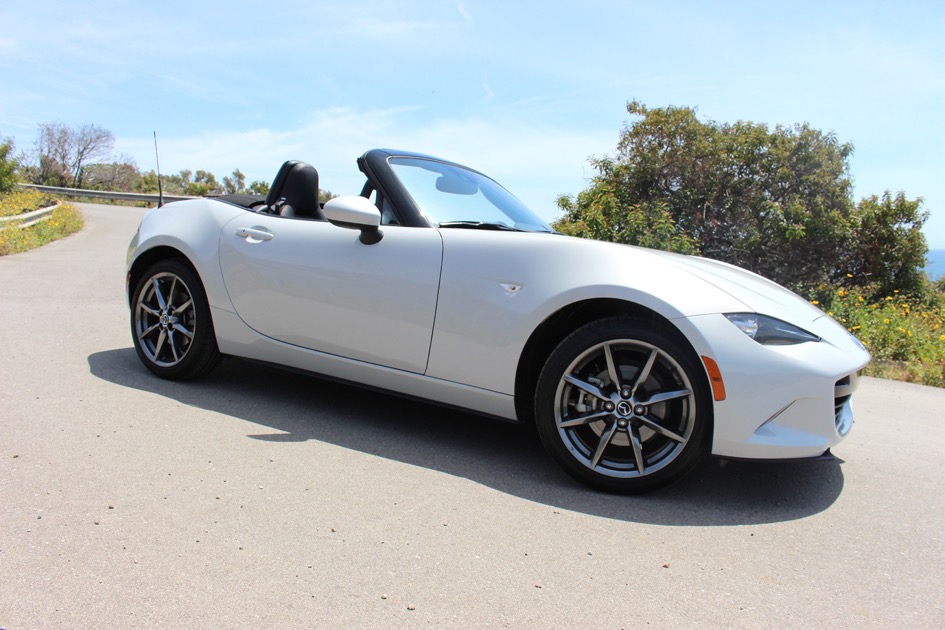 The new and improved version with SKYACTIV Technology is the next logical step in the evolution of the Mazdaspeed version of the Miata. The total package allows the new generation Miata with 155 horsepower @ 6,000 rpm and 148 lb.-ft. @ 4,600 rpm to attain an EPA rating of 27/34 miles per gallon.

The total SKYACTIV mindset encompasses the entire project, which reduces the overall weight by 150 pounds compared to the prior model. The end result is a staggeringly low 2,332 pounds. Even the hood and trunk lid are aluminum to reduce weight and keep the center of gravity down low, where it should be. The Miata could very well make Colin Chapman blush. Certainly, Colin developed fly-weight cars at Lotus, but never packed with this much content.

This also harkens back to countless fun miles spent behind the wheel of the lively Honda S2000. Small and aggressive, the competitor to the Miata was like a little dog with a big bite. But, those nagging issues of the Honda, from the less than stellar color match of materials to the cramped space, and a happy rear end that danced about too frequently when pushed are still fresh in my memory. In contrast, this Mazda is well sorted out. All of the fun without those shortcomings. 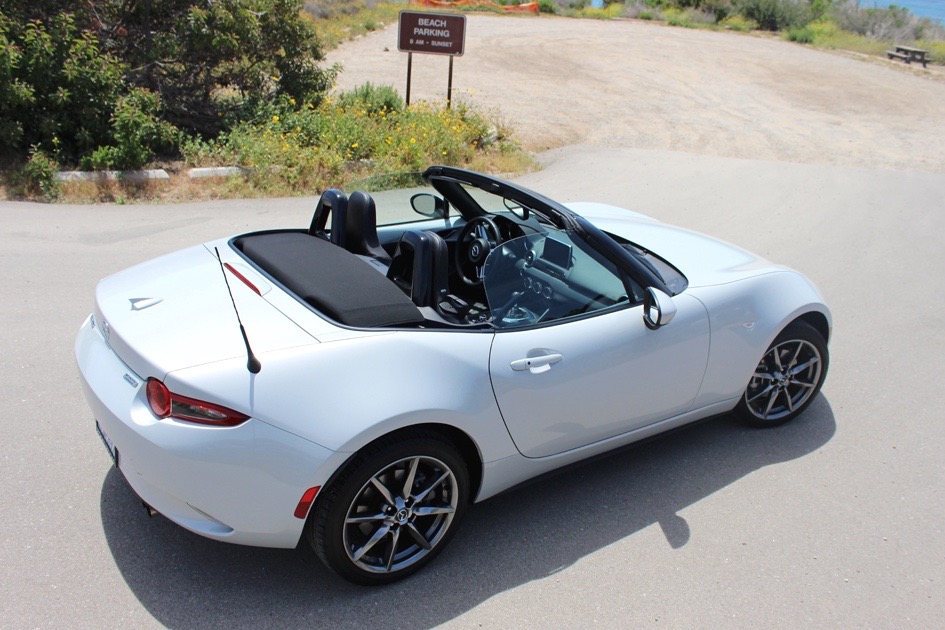 The MX-5 lives for carving up the hills of the Santa Monica Mountains. The double-wishbone front and multilink rear suspension feel nicely set up, albeit these could be just a tad stiffer. There’s plenty of juice on tap to deal with the elevation changes, and non-stop snaking roadways. This small, lightweight projectile is a heat-seeking missile on the roads of Malibu. There’s just enough power to get you into trouble, but not so much that you can’t dig into the peddle on the right often and hard.

Surprisingly, even with the car fully loaded with people, two to be exact, this can still come alive on the freeway. This doesn’t have the grunt like a muscle car, but then again this isn’t one. The very cooperative manual transmission allows us to make the most of what the rev-happy engine has to offer.

This really is hard to beat when discussing the fun to drive factor. Piloting this doesn’t require a pro-level of abilities to really extract smiles all day long. Just being able to hang the rear out in a progressive manner is confidence boosting. On the flip side, is acting like a reckless kid on city streets a good idea? Well, maybe just once in a while, right? 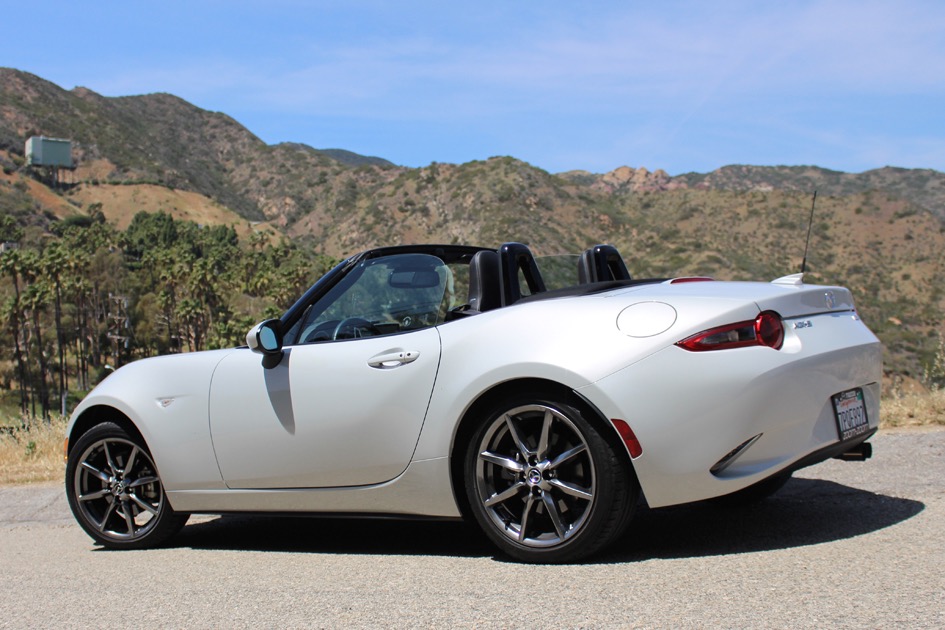 What makes this so dang appealing is the blend driving intent and design. The new styling from Mazda doesn’t appear cute or conservative, and it doesn’t look over-the-top, ridiculously outrageous either. The KODO design theme is a contrast between a relaxed state and motion. This surface tension can also be seen on the interior panels.

The exterior body flows and has subtle angles that catch the light and shadows, which is especially impressive considering this car’s ceramic white exterior paint. Typically, white is not the ideal color for reviewing surface changes, but this is different. So, as one moves around the car, it always provides a little something extra that has one looking back over the shoulder again and again.

Other treats for the eyes include the cut lines of the ovoid gas filler lid, and the LED headlights that have a fierce expression, and a bit of complexity in the elements. Additionally, the smaller dimension of the lens-cover allows the shape of the body to speak louder, which is also a noticeable benefit on diminutive products. On a smaller canvas, being able to use every millimeter is key. 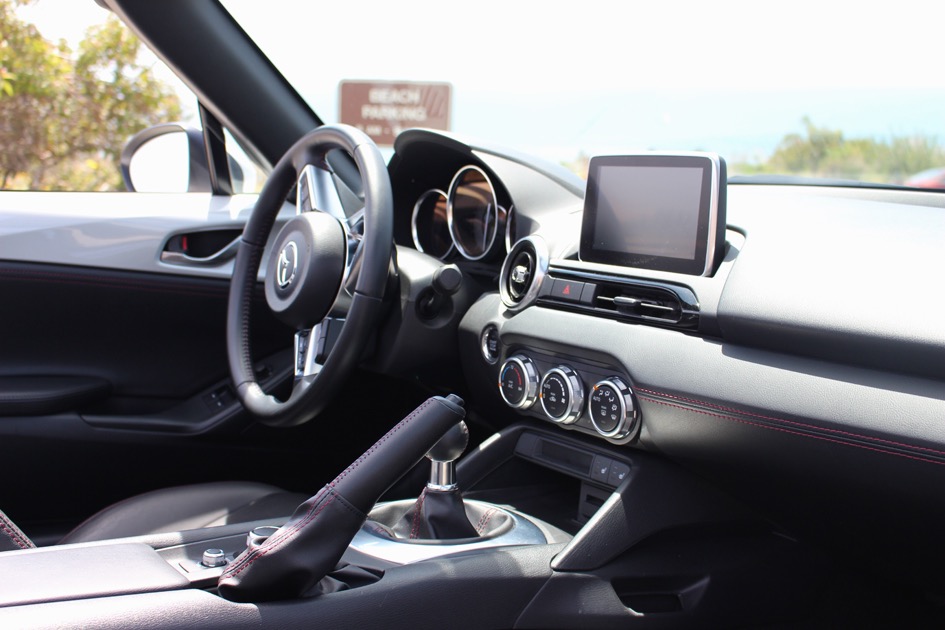 The Miata is pretty much in a class by itself. Okay, you could suggest that the Fiat 124 is in the same genre, and shares more than a little with it’s Asian cousin. But, the styling creates two different characters. The consensus is the 124 is simply not on par with the Mazda product.

On the interior, there is dedicated attention to blending various and wonderfully textured materials to look like one. Although, opting for a small rectangular vent in the center is inconsistent with the spherical vent opening. However, this gives the illusion of more space in the minimalist environment. It could be argued either way if this is the correct pathway. No doubt that was considered at some point in the development process at the Mazda studios.

Mazda incorporates a 7-inch full-color touchscreen panel that doesn’t disrupt the horizontal lines of the IP. The knurled knob of the Multi-function Commander Control has a jewel-like quality to it. There are other elements that encourage the eyes and hands to wander, reach out, grab ahold, or caress the surfaces. Trimming some of the plastic surfaces would be nice for an upscale model, however the downside is the added weight. As it currently sits, the team at Mazda has created a very inviting daily driver. 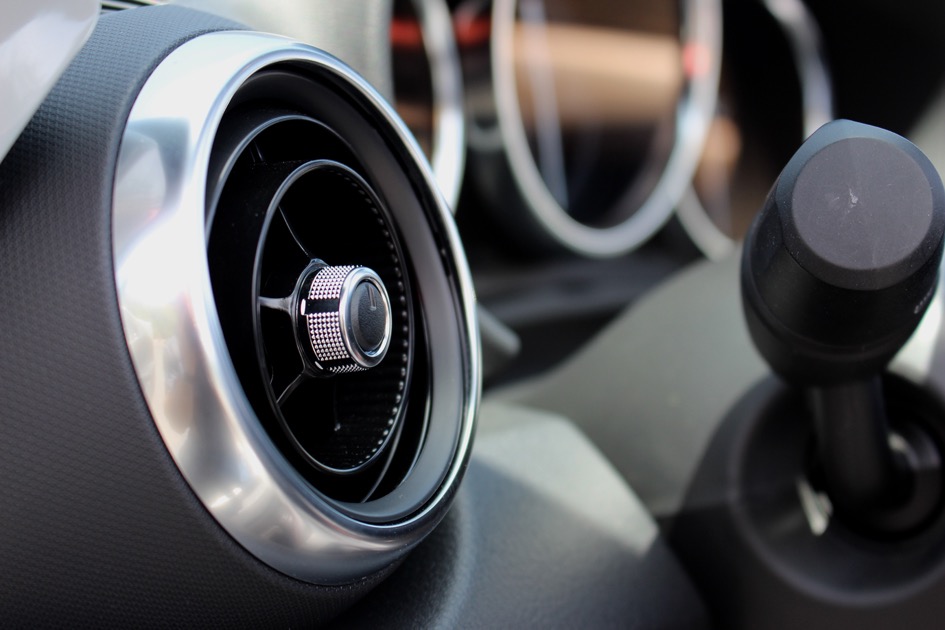 As with any sequel, the success or failure will be determined by the customers. But, with a million on the road already, there’s probably more than a few ready to buy a ticket for a seat in this action adventure.