Volkswagen of America, Inc. (VWoA) is pleased to announce that the ID. BUGGY concept will appear at the Pebble Beach Concours d’Elegance during Monterey Car Week. Since its world debut at the Geneva International Motor Show in March, the ID. BUGGY has created buzz about the future possibilities for this electric dune buggy.

Drawing inspiration from the classic dune buggies of the 60s, the ID. BUGGY shows the versatility of the modular electric drive matrix (MEB) and puts the fun in functional. The ID. BUGGY’s modular design allows for the composite upper body to be detached from the MEB chassis, opening up a world of possibilities for custom vehicle production, as the original Meyers Manx kit did for the first buggies.

The drivetrain of the I.D. BUGGY concept with zero direct emissions is made up of the electric motor integrated in the rear axle, with power electronics, a single-speed gearbox, and the high-voltage flat battery (62 kWh) arranged in the car floor to save space. The electric motor delivers 201 horsepower and maximum torque of 228 lb-ft from a standstill, and gives the vehicle an estimated range of 155 miles on the WLTP cycle. This means that the electric vehicle can provide enough power to the rear axle, even off-road. The concept car sprints from zero to 62 mph in just 7.2 seconds. The maximum speed is electronically controlled at 99 mph. 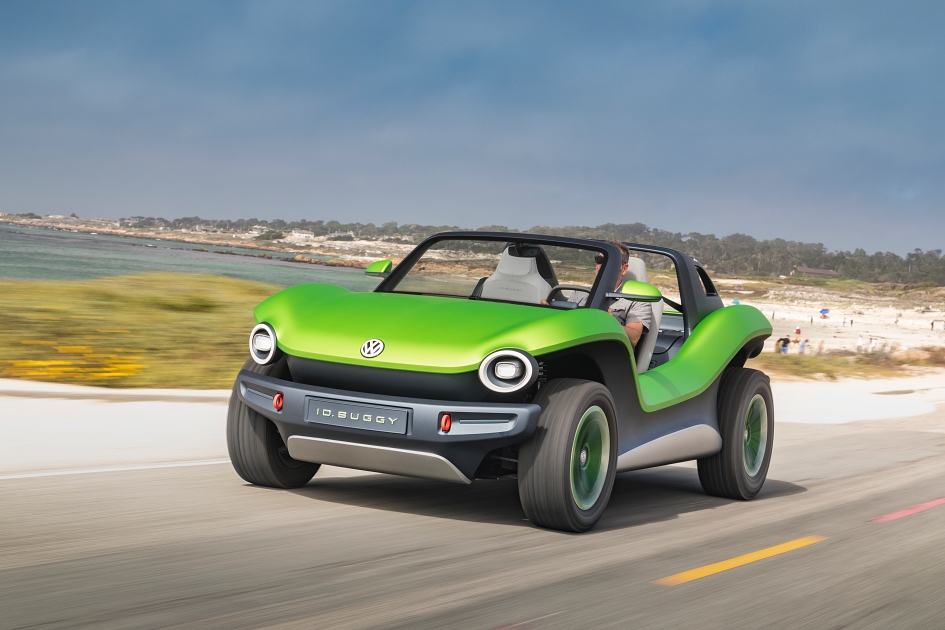 No Doors. No Roof. No Problem.

The lack of doors and a roof make the two-seater ID. BUGGY ready for the purest form of classic beach cruising. Off-road features include standard 18-inch wheels and BFGoodrich All-Terrain T/A® off-road tires (255/55 at front and 285/60 at rear), as well as solid aluminum underbody protection that ensures that the front axle and ancillaries are not damaged during off-road driving. Two robust red steel eyelets are integrated in the bumpers for towing and the reinforced windshield frame and the Targa bar provide rollover support.

Inside, the ID. BUGGY features a minimalist aesthetic and waterproof materials. A hexagonal steering wheel, wrapped with water-repellent Nappa leather, features touch controls in the crossbar, and a digital instrument cluster keeps the dash uncluttered. Despite the shortened wheelbase of the concept car, passengers have an unusually large amount of space. This is due to the ID. family’s compact electric drivetrain. 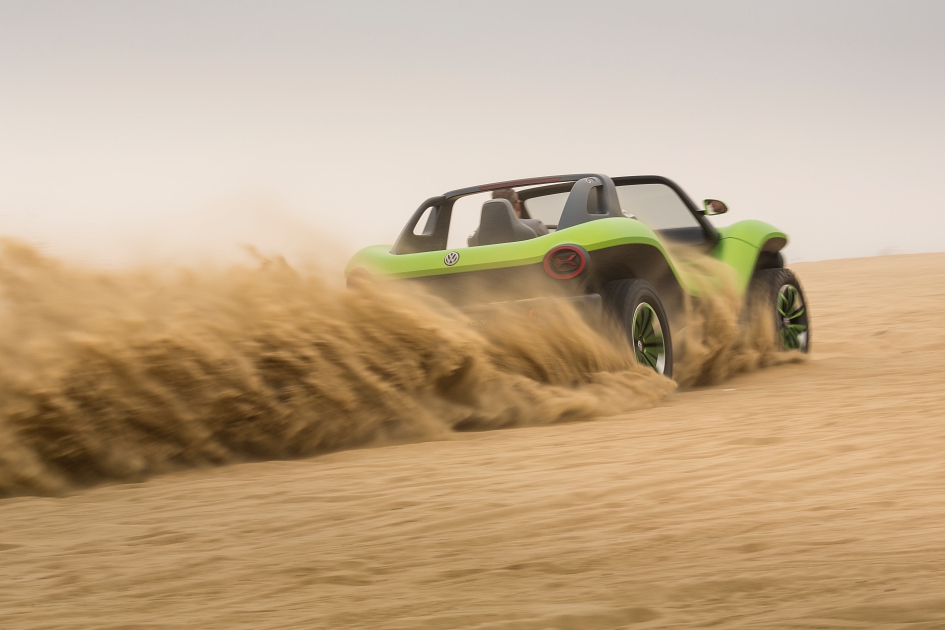 The ID. BUGGY joins the family of ID. concept and production models, each utilizing the MEB platform to inspire a new generation of Volkswagen drivers. The first production model in the family—the compact ID.3 hatchback—goes on sale this fall in Europe. The second model slated for production will be a compact SUV based on the ID. CROZZ concept, which is expected to arrive in the U.S. late in 2020. The ID. BUZZ, the electric successor to the Microbus, is expected to go into production in 2022. Other ID. family concepts include the full-size ID. ROOMZZ SUV—bound for the Chinese market in 2021— and the ID. VIZZION sedan that is expected in Europe in 2022.

The Volkswagen Group has made one of the world’s largest commitments to electric vehicle production—a planned investment of more than $50 billion through 2028 and 70 new electric vehicles coming to market around the world. The Volkswagen Group has set a target of global carbon neutrality across its fleet, production and administration by 2050 and embraces the goals of the Paris Agreement to limit global warming to 3.6 degrees Fahrenheit. By 2025, the company intends to reduce its global carbon footprint by 30 percent. 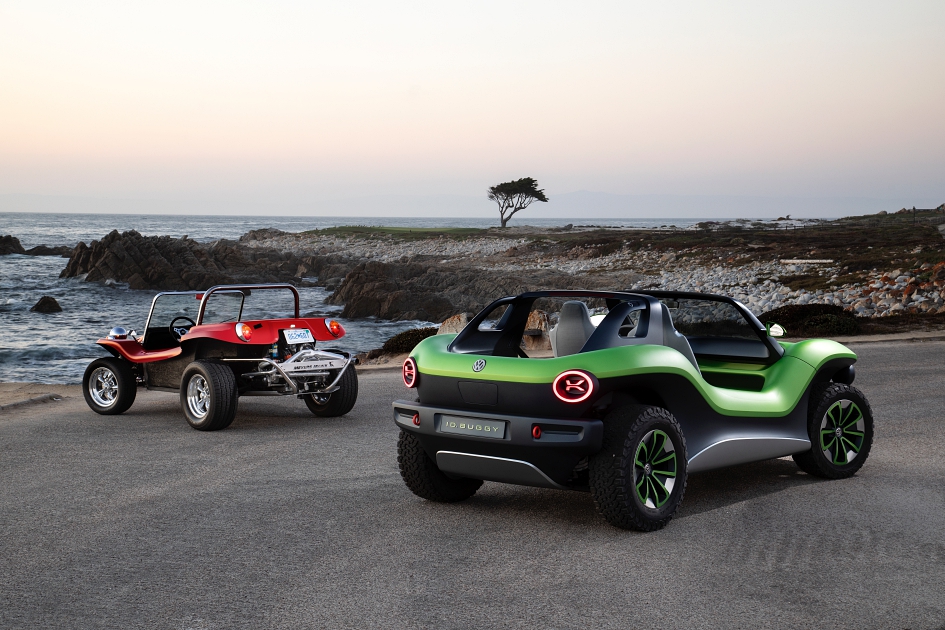 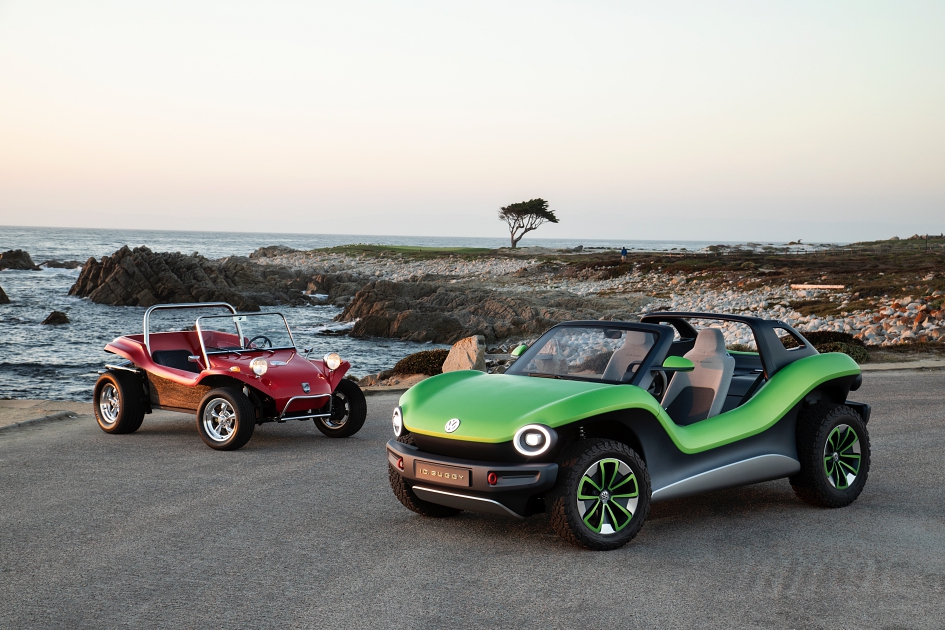 “VW”, “Volkswagen”, all model names and the Volkswagen logo are registered trademarks of Volkswagen AG. All other trademarks are the property of their respective owners.

Concept vehicles are not available for sale. Specifications may change.