A Power Trio Sing in the Canyons of Malibu

Home/Articles/A Power Trio Sing in the Canyons of Malibu

A Power Trio Sing in the Canyons of Malibu

Now, if you could have 15 minutes of fame with one road going wonder-car, which would it be? And, can you extract anything in that brief encounter? Will it change your life and make your smile broader, or even make the slightest bit of difference at all? On the engaging canyons of Malibu we go back-to-back-to-back with the Acura NSX, McLaren 570S Spider, and the evergreen, American Chevrolet Corvette Grand Sport. The personalities and driving experience of these are as varied as the designs. 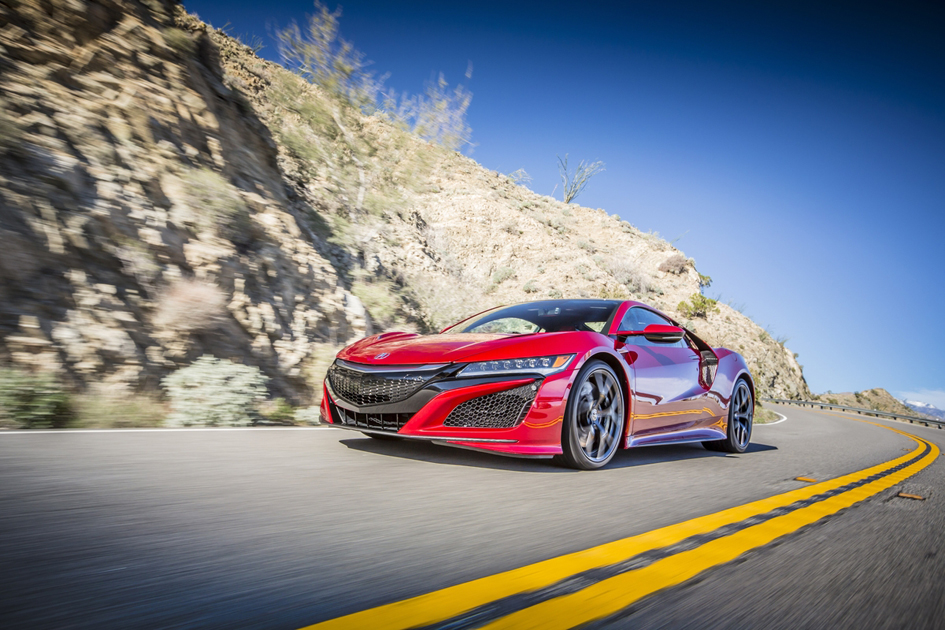 For comparison, these are all sampled along the same route that offers a chance to get cooking, as well as slower speed, tight twists and turns. This covers the grounds from Kanan Dume Road at Mulholland to the fabled Rock Store, then looping back along the tail of the dragon back to our starting point.

This isn’t exactly an opportunity to delve into design as much as it is a chance to see if the ergonomics, dimensions, outward visibility work under these demanding, real world conditions. In numerous spots along the drive the difference between staying safe and going off a canyon cliff or plowing into an outcropping of rock is just a few feet and a blink of an eye. Given the OEMs like the cars back in the way those were sent out (as do we), and because we value our lives, no cars or animals were harmed in the process. 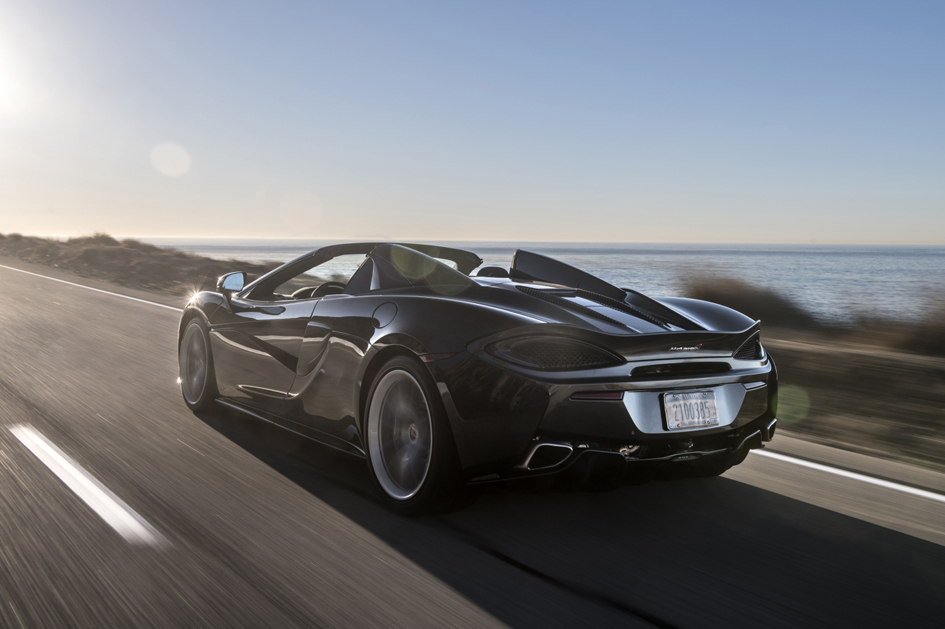 Carving Up The Hills Of Malibu

For those unfamiliar with the Malibu area, this roadway that cuts through the Santa Monica Mountains is in its own right provocative. It really is enough for any driver, and requires full engagement with the driving experience at all times. However, tossed into this mix are possible horseback riders, a bevy of bicyclists looking to become human hood ornaments, motorcyclists of all skill levels, and an occasional downhill skateboarder inevitably testing his/her health insurance coverage.

Buckling into the NSX is a simple affair, but the numerous settings require something akin to a training session for a flight simulator. This does have a level of complexity to it that elevates it from say the run-of-the-mill Honda Accord. And, the displays are fascinating. Certainly, those get cast aside once we encounter the first turn. As with many a car offering all manner of visual stimulus, the Acura’s HMI is best left to smoother and straighter roads. That being said, we attempt to adjust the settings while in motion. Attempt is an appropriate word. Tweaking the advance settings by touch alone is not recommended. 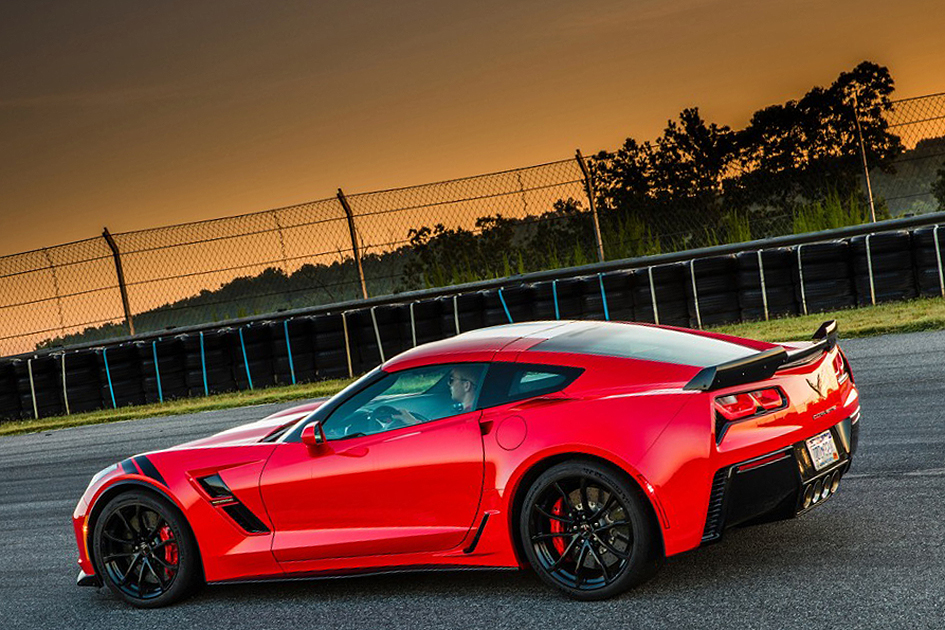 And on that note, smoothness is the buzzword when it comes to the NSX. This generation is true to the original with exotic car performance coupled with everyday drivability. The Acura does what it should as an exotic, just in a refined, inoffensive way. Perhaps this is cultural thing from the parent company?

The styling also reflects this. Sure, this has the stance of supercar, but doesn’t go as far as say any of the Lamborghinis or the Ford GT. Certainly, when it comes to design, you can’t please everyone. Acura is occupying a niche that those other cars don’t. 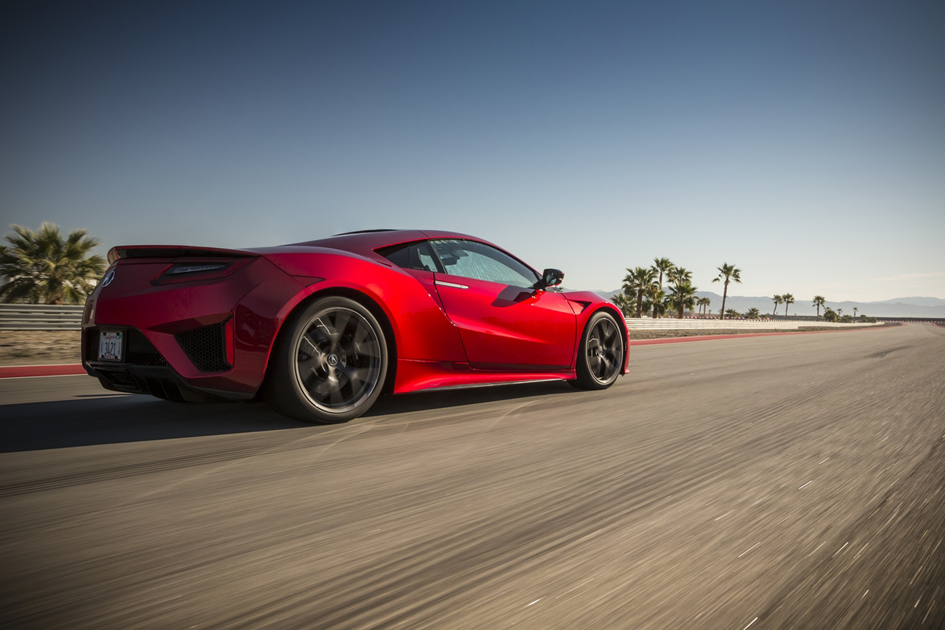 The sharp, hard creases do harken several other brands, and some of the other Honda/Acura products, but not in an overly familiar way. This does indeed stand apart from the rest of the OEM’s family.

The McLaren is the opposite of the Acura in numerous ways, or at least it comes across as such in a 15-minute encounter. From design to drive, the McLaren has only one mission in life – and that’s to move fast. 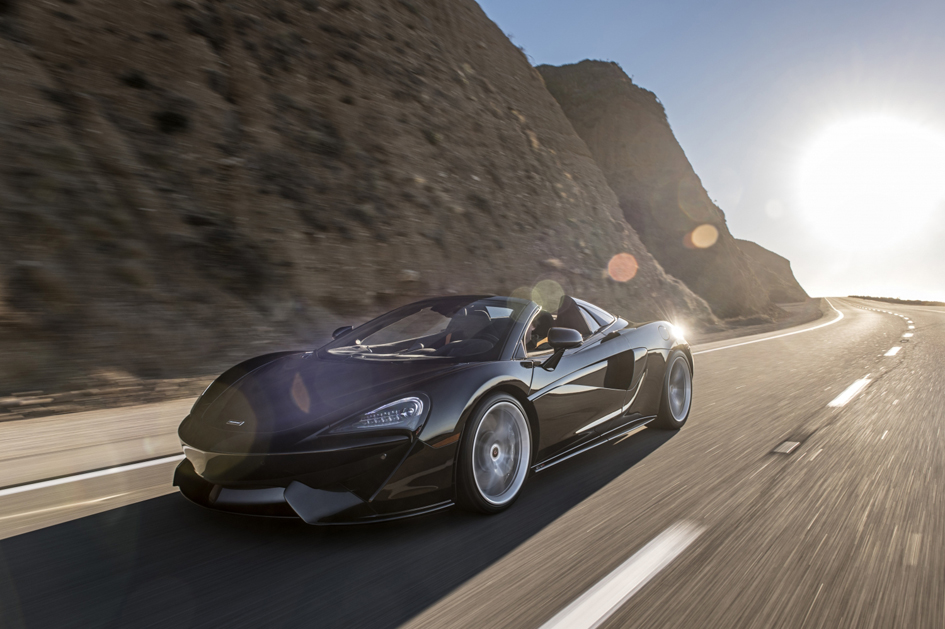 The 570S replaces the Acura’s exterior sharp folds with a softer, organic feel. The flowing body almost compels one to run a hand over the graceful fenders. While the smooth shapes could be considered less aggressive, make no mistake; the massive air intakes are all business.

The interior also has fewer distractions in comparison, and a very open feel. The intent seems to be to keep the driver focused on the road, not an endless sea of controls. 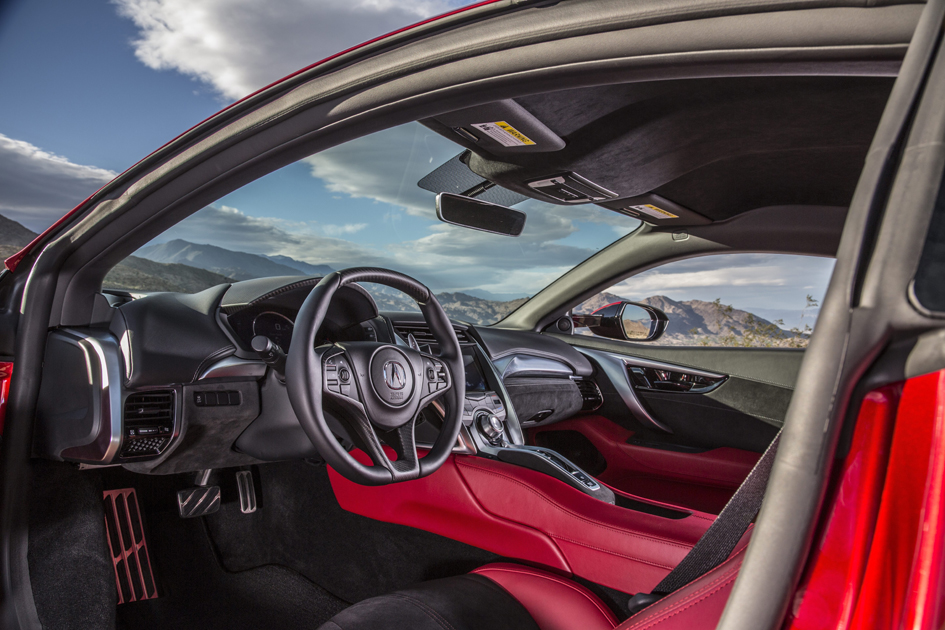 The driver-focused experience continues once the car gets rolling. Within a few feet it’s clear that the steering is providing greater feedback on the transition from a grass lawn to a dirt road, and finally onto a paved street. The reason for this is the use of hydraulic power steering system instead of the Acura’s electric power steering. Hydraulics seem to be a throwback, but it offers drivers that edge in terms of feel, and complement the McLaren’s mission.

As for the Corvette, well, it’s still a Corvette. Like it or not, the body is still distinct, and it’s an evolution of the Chevy from the prior generations that came before. 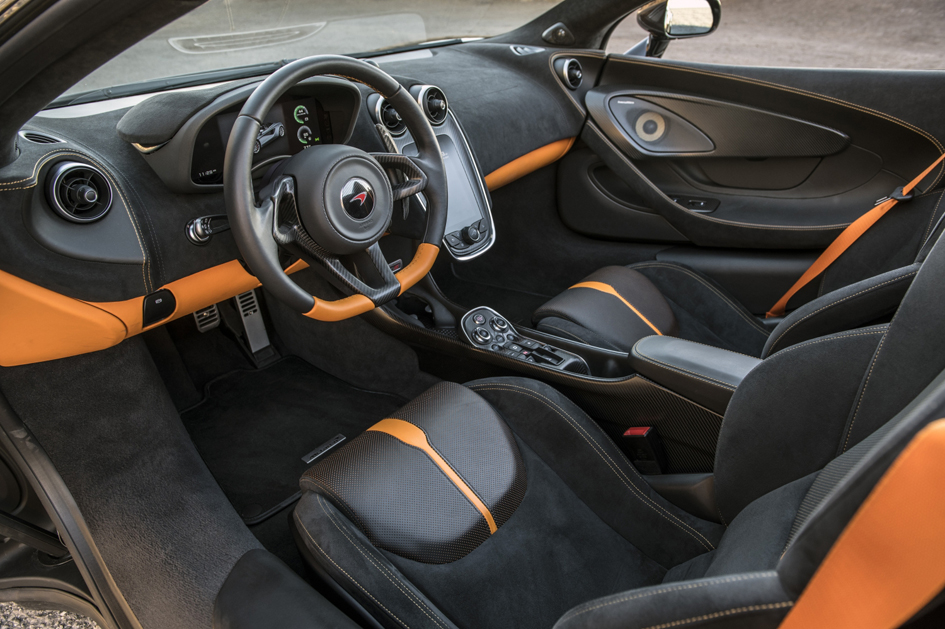 Unlike the Acura NSX and the McLaren 570 S, the Corvette is not a cab-forward-esque design, nor a mid-engine layout. However, from a styling perspective, the Vette properly uses the lengthy, sculpted hood to create a statement.

The Corvette body is punctuated with smallish, inexpensive looking vents. At least these do look more attractive in body-color compared with contrasting black color. One could make the case that the vents distract from the rather aggressive styling, and detract from the visual flow. 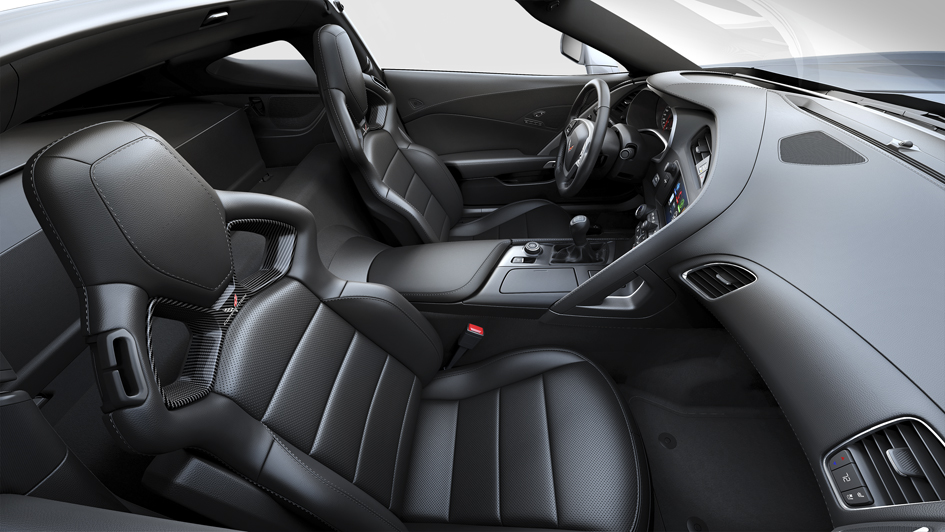 The interior doesn’t feel as airy as the competition in this group, both due to the color of materials (dark), as well as the result of a front-engine/rear-drive with a manual transmission configuration. It’s not entirely claustrophobic, however in all fairness, I’m not as large as most Corvette owners. The openness behind the front seats does provide a bit more relief and a slight amount of storage. That’s one advantage over the mid-engine exotics.

The other differentiator, which is both a throwback and zesty, good fun, happens to be the transmission. Technology marches forward, yet the Corvette can still be optioned, like this one, with a manual (6-speed). Perhaps this isn’t as sophisticated as automatic transmissions, but this makes up for it in sheer pleasure. This passionate interaction between man and machine is hard to deny. Not to mention, the aural pleasure is par for the course. After all, this is still a V8! 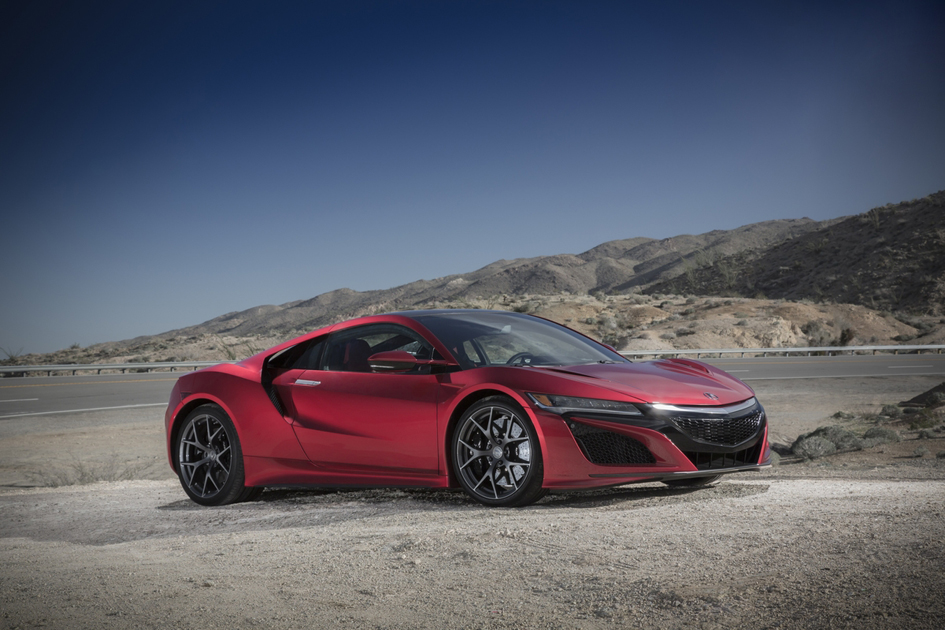 15 Minutes Of Fame With Three Exotics

To be blunt, 15 minutes in Malibu is only enough just enough get our, umm, feet (or something like that) wet. But, there is something that we gleam from all of this.

Short nose designs are far superior in this situation. Perhaps on vast open stretches of roadways or tracks the difference is less important, but it helps on a narrow canyon. Malibu canyons are challenging, narrow, and are known to have complications to dodge, like animals, rocks, and debris. Any visual advantage is welcome. 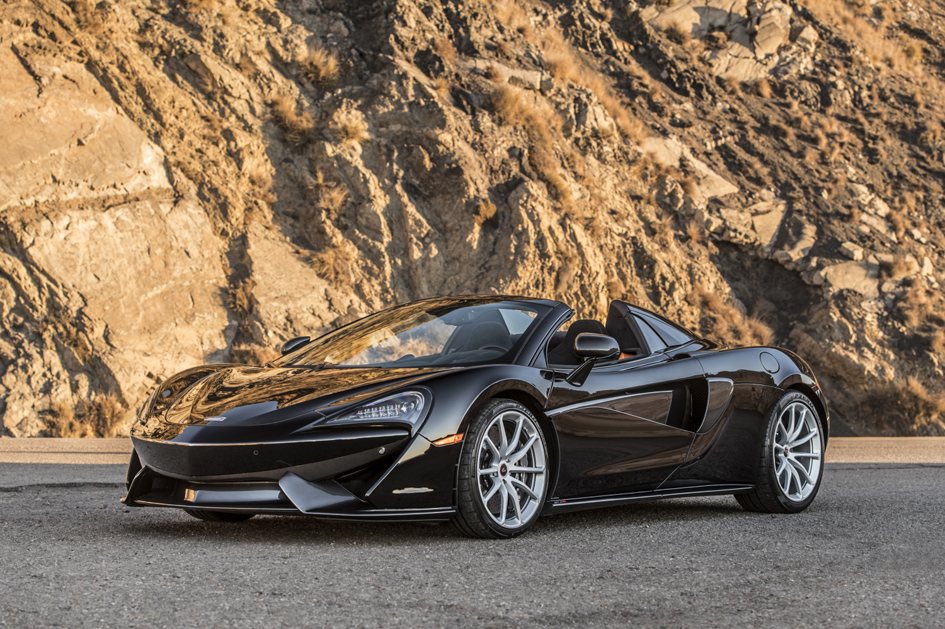 Secondly, gobs of power are fine, but the frequent cutbacks and obstacles on the street Malibu, never allowing any of this trio to be really enjoyed as the OEMS intended, hamper all three. We only use just a fraction of what this trio offers. Well, to be honest, it is physically possible to traverse the canyons and blind turns with gusto. However, being able to do something and doing it safely is not necessarily the same thing. As different as the Acura, Chevy, and McLaren are, all are extremely competent in this setting regardless of speed.

There is something else one comes away with in this 15 minute flog. The psychological effect of the designs does make the entire experience feel even sportier than the actual drive. As this was definitely a healthy, heart rate elevating romp, it demonstrates that a stimulating design makes a good drive great! 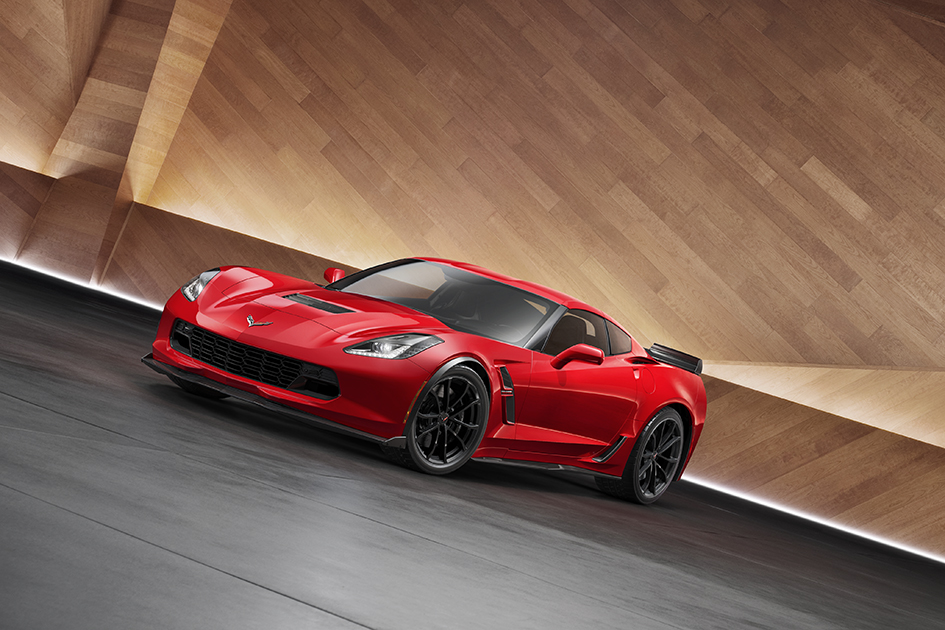 Post Script: This epic jaunt looped around the hills – up and back from Calamigos Ranch, along Kanan Dune Road, and past the famed Rock Store. While the canyon roads remain, the Woolsey Fire now mars much of the picturesque drive. Our deepest sympathy goes out to those that suffered loss from the recent tragic events in Malibu and elsewhere.