Five years ago Kia Motors America (KMA) debuted the redesigned Optima at the New York International Auto Show and introduced a game changing midsize sedan that catalyzed the brand’s designed transformation. History was repeated when the all new 2016 Optima, a symbol of the Kia brand’s maturation through continuous refinement and obsessive attention to detail, made its debut here today. An instant hit with consumers looking for a fresh alternative to an otherwise staid segment, the Optima has been KMA’s top selling vehicle for three consecutive years, and the all new model is poised to continue that success.

Conceived under the watchful eye of Kia’s president and chief design officer, Peter Schreyer, with modern and instantly recognizable design cues, the Optima maintains its athletic identity but rides on a chassis that is longer, wider and stiffer for improved ride and handling and a more spacious cabin. Available with three engine choices, including a new 1.6liter turbocharged four cylinder that’s mated to a seven speed Dual Clutch Transmission (DCT), the Optima is more confident than ever on the road. The all new Optima’s roomier, more luxurious cabin features an impressive level of craftsmanship that will come standard across five trim levels – LX, LX Turbo, EX, SX Turbo and SXL – when sales begin in the fourth quarter of 2015. As with its predecessor, the all new Optima will be built at Kia’s plant* in West Point, Georgia. Pricing will be announced closer to the vehicle’s launch date.

“The Optima changed the way people felt about the Kia brand, and KMA owes much of its growth and success to its head turning design and sporty performance. It was – and still is to this day – a fresh alternative in the midsize sedan segment, and it amplified a five-year design led transformation that propelled Kia to record setting sales year on year,” said Michael Sprague, executive vice president, sales and marketing, KMA. “The all new Optima retains the signature personality of its predecessor, but we’ve literally improved everything, providing more space, better ride and handling, more technology and greater refinement.” 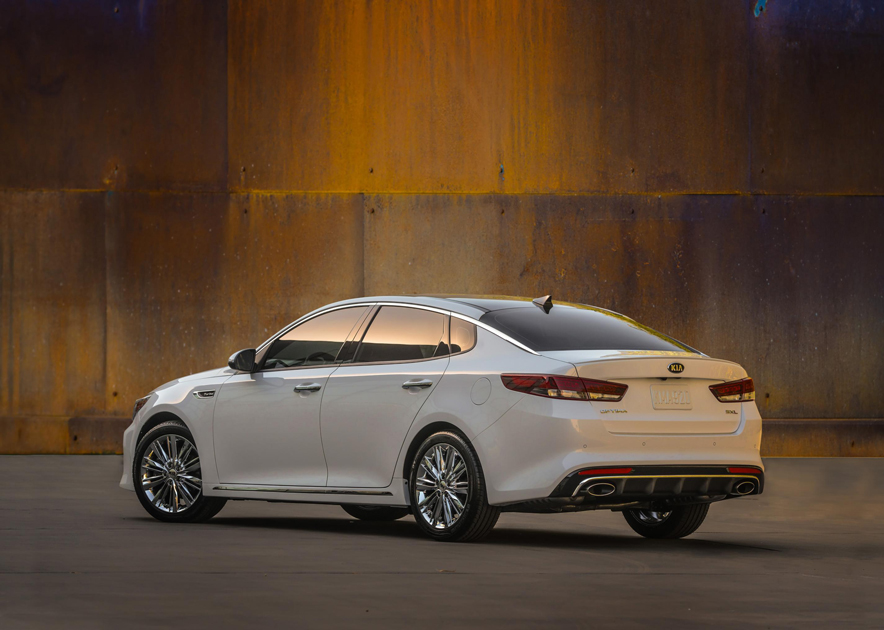 Instantly Recognizable European Design
Because the previous generation Optima was such a success story for the brand, Kia’s designers had to strike a delicate balance, retaining the identity of the vehicle while, at the same time, making a confident move forward to keep the car modern and fresh. Sweeping contemporary surfaces and modern architecture inspired the design of the all new Optima, revealing a sophisticated and dynamic sedan that
is instantly recognizable yet has more road presence than ever.

The all new Optima is boldly designed to be functional and sporty with exterior dimensions that are marginally longer, taller and wider. The
wheelbase has been extended to 110.4 inches (increased 0.4 inches), and the vehicle has been widened to 73.2 inches (increased 1.0 inch). Both changes enable a roomier and more comfortable cabin with more head room, shoulder room and rear seat leg room. The increased dimensions also allow for more cargo capacity in the trunk.

The aggressive front clip pulls the sheet metal taut over the wheel arches, and the sweptback headlights reach deeply into the fenders. On the SX and SXL trims, Kia’s signature tiger nose grille is hot stamped and composed into a sophisticated pinpoint design that bears a strong resemblance to Kia’s luxury sedan, the K9001. The all new Optima introduces Kia’s first application of bifunctional HID headlights – with available Dynamic Bending Lamps and High Beam Assist – that illuminate the tarmac around corners.

The greenhouse silhouette maintains the raked A pillar and sweeping C pillar that lend the Optima its sport sedan appearance. The rear vent windows kick up smartly just ahead of the carved rear fenders. As with its predecessor, the all new Optima incorporates a raised deck lid, and the use of available LED halo style tail lights mimics that of the Cadenza premium sedan.

The 2016 Optima rides on alloy wheels ranging from 16 to 18 inches, with three new unique 18inch
wheel designs, depending on trim level.

Three new exteriors colors compliment the latest Optima’s sophisticated styling: a vibrant blue inspired by a sparkling ocean underneath a sunny sky; a dynamic grey with olive undertones, and a deep red that gains depth from the use of aluminum pigments.

Exquisite Interior Craftsmanship
Optima’s interior is larger and more comfortable with an innovative and functional cabin that is well appointed with class up touches. Drawing inspiration from Kia’s premium and luxury sedans, the Optima utilizes more soft touch materials throughout the passenger compartment. Optima’s luxurious interior is obsessively crafted with an impressive attention to detail and features real stitching along the dash and doors, complimented by tasteful metallic accents, varying by trim level. The driver oriented cabin has been simplified with a cleaner, more unified design than the previous generation, with a stronger horizontal plane and a wider center console that help create a greater sense of space. By grouping and reducing the number of functional keys and buttons, Kia’s already superior ergonomics are
markedly improved.

The interior design team also paid particular attention to seat comfort. A stiffer seat frame reduces vibration and soft foam in the headrest, upper back and thigh support areas allows occupants to nestle into seats with deeper side bolsters made with denser, more supportive foam. For extra convenience, heated and ventilated front seats are available with power adjustable driver and front passenger seats. For added convenience, the 2016 Optima offers a height adjustable front passenger seat, a feature normally found only in premium vehicles. Depending on trim level, the seats are covered in cloth, leather or luxurious Nappa leather and two new interior colors – a rich merlot and a dark aubergine – are available. 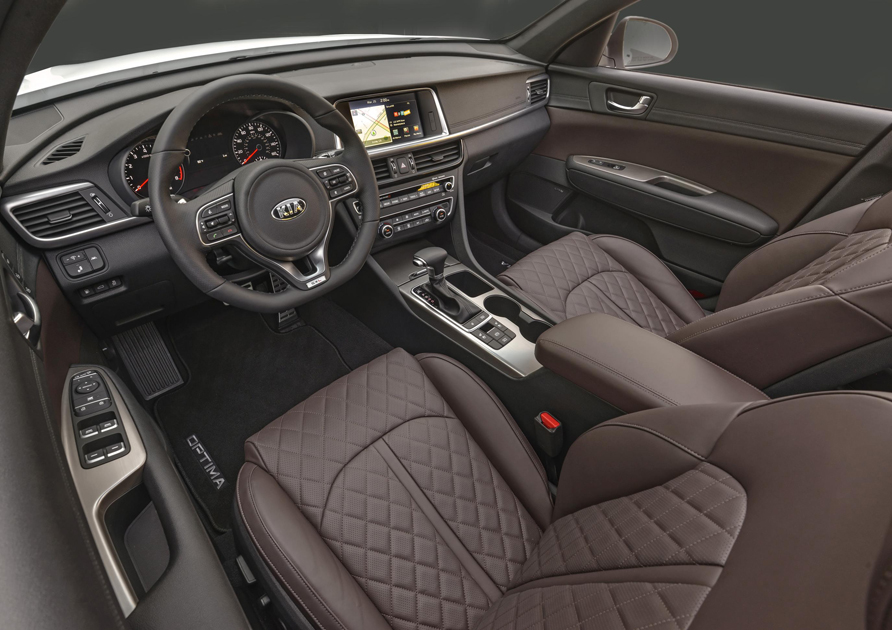 Convenience and Technology
Kia’s cuttingedge
connectivity system, UVO2, comes standard with four additional eServices not previously available on Optima: Geofencing, Speed Alert, Curfew Alert and Driving Score3. Additionally, Optima is Kia’s pilot vehicle for the introduction of AndroidTM4 Auto and Apple®5 CarPlay (late availability), which allow drivers to access a suite of core functions from their smartphones. After connecting their smartphone to the head unit via the vehicle’s front fast charge USB port (another fast charge USB port is located in the rear seat), the 8inch touchscreen screen displays the smartphone’s most important features.

Core functions including music, messaging, navigation and voice calls are available via the screen, the steering wheel or via voice command2. Kia is one of the first to deliver this technology, which is available for select Android phones operating with Lollipop or Apple phones operating with iOS8.X or higher. Any future third party apps that are added by either Android or Apple will be available for customers to enjoy from their respective app store.

While the standard six speaker audio system will satisfy all but the most demanding enthusiasts, true audiophiles will gravitate to the available Infinity® Premium Audio System6, which includes 14 speakers, ClariFi ™7 technology and an upgraded 630watt digital amplifier. ClariFi is a patented music restoration technology that rebuilds audio signals that are lost in the digital compression process. This technology breathes new life into your favorite music, restoring a high-fidelity listening experience to any compressed digital source. Optima’s premium Infinity audio system also comes equipped with next generation QuantumLogic™7 Surround technology, which extracts signals from the original recording and redistributes them into an authentic, multidimensional soundstage for playback that is clear, refined and detailed. Kia was one of the first automakers to incorporate ClariFi technology into their audio systems with the debut of the 2016 Sorento, and Optima is the first ever Kia sedan to feature QuantumLogic Surround technology.

The all new Optima takes convenience to the next level with a long list of available technologies across the various trim levels. Available on every Optima is a rear camera isplay8 while SX and SXL trims offer an available 360degree Around View Monitor8. Available driveraid technology, including Advanced Smart Cruise Control (SCC)8, Blind Spot Detection (BSD)8, Rear Cross Traffic Alert (RCTA)8 and Autonomous Emergency Braking (AEB)8 – which, under appropriate conditions, will bring the vehicle to a complete stop to potentially avoid a collision or reduce damage – makes the task of driving easier and more convenient. Also available for the first time on any Kia vehicle are Bifunction HID headlights with Dynamic Bending Lamps (DBL) and intuitive High Beam Assist (HBA), which recognizes oncoming traffic and automatically switches the lights to low beam until the opposing vehicle has passed. 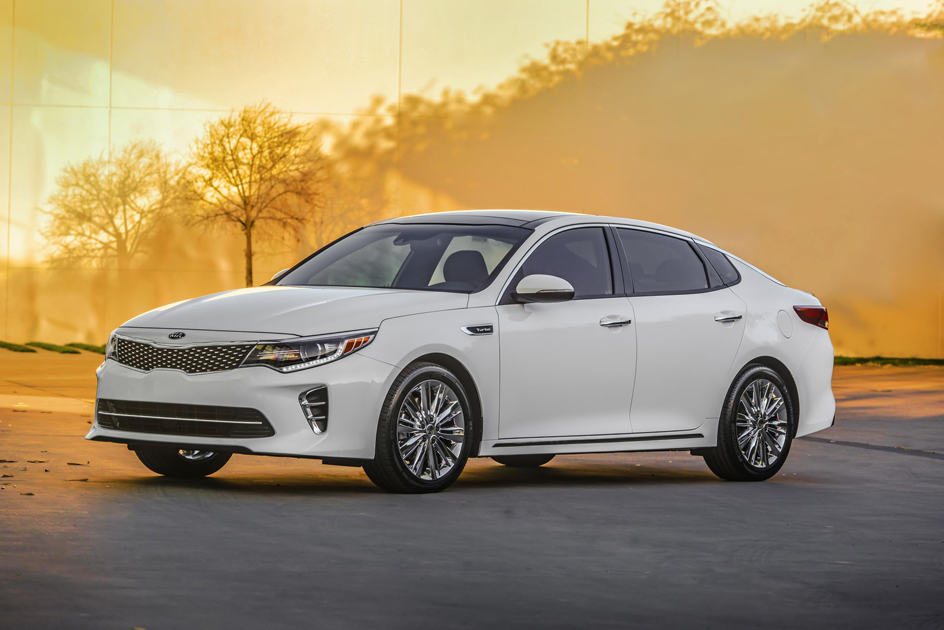 Smart Performance and Safety
The 2016 Optima features a uniquely engineered body that combines various high tensile strength steel alloys and sits on a chassis that is stiffer and more durable thanks to the increased use of Advanced High Strength Steel (AHSS). With more than 50 percent of the body constructed from AHSS, the allnew
Optima represents a 150percent increase over the previous car. The greater use of structural adhesive by more than 450 percent over the previous generation improves NVH and contributes to structural rigidity. Engineers also added more hot stamped components to the all new Optima, a 350percent increase over the 2015 model. This body structure helps provide crash protection, better driving dynamics, and is the foundation for a quieter ride.

Additional innovations were implemented to reduce NVH, lighten the vehicle and enhance aerodynamics. The 2016 Optima is the first Kia to feature a panoramic sunroof support structure made with carbon fiber reinforced plastic, which helps reduce weight and lower the vehicle’s center of gravity. A larger full floor under cover helps reduce wind noise and aid fuel efficiency. Increased dash insulation, added windshield side molding and the increased use of structural adhesive ensure a quiet ride with reduced road and wind noise. Engine mounts, body panels and wheels all are stiffer on the all new Optima, reducing vibrations, engine noise and road noise. Larger crossmember bushings are utilized to help isolate road and engine noise, as well as reducing engine vibration through the floor and steering wheel.

The all new Optima is available with three engine choices, striking a performance balance between sportiness and fuel efficiency. Two powerplants carry over from the previous generation, the 2.4liter
GDI four cylinder, available on the LX and EX models, and the 2.0liter GDI turbo engine, available on the SXL and SX Turbo models. While the engines have yet to receive EPA certification, the 2.4liter is estimated to produce 185 horsepower at 6,000 rpm and 178 lb.ft. of torque at 4,000 rpm. The 2.0liter turbo is expected to generate approximately 247 horsepower at 6,000 rpm and 260 lb.ft. of torque at 1,350 rpm. Both engines are mated to a six speed automatic transmission with Sportmatic® shifting while the SX and SXL trims add paddle shifters. Both engines have been retuned for fuel economy9 and better performance and drivability with maximum torque now available at a lower RPM.

All new for the 2016 model is a 1.6liter four cylinder turbo engine. The 1.6liter will be offered on the LX trim. Pushing out an estimated 178 horsepower at 5,500 rpm and a stout 195 lb.ft. of torque at just 1,500 rpm, the new engine mates to a seven speed DCT, a first for the Kia brand. The transmission optimizes the engine’s responsiveness for a sporty feel that doesn’t sacrifice fuel economy. Also new for the Optima, Michelin®10 tires are available on all trims. All three engines channel energy through the front wheels.