The LA Auto Show packs the halls with major OEMs that measure sales in thousands of units. The public is very familiar with those, as most have been around for ages.

In contrast is Aria Group. The LA Auto Show exhibit space for Aria isn’t filled with special effects, giant screens, or a massive homage to a movie franchise. Nope. The OC California based company is garnering attention the old-fashion way – with an imaginative car. 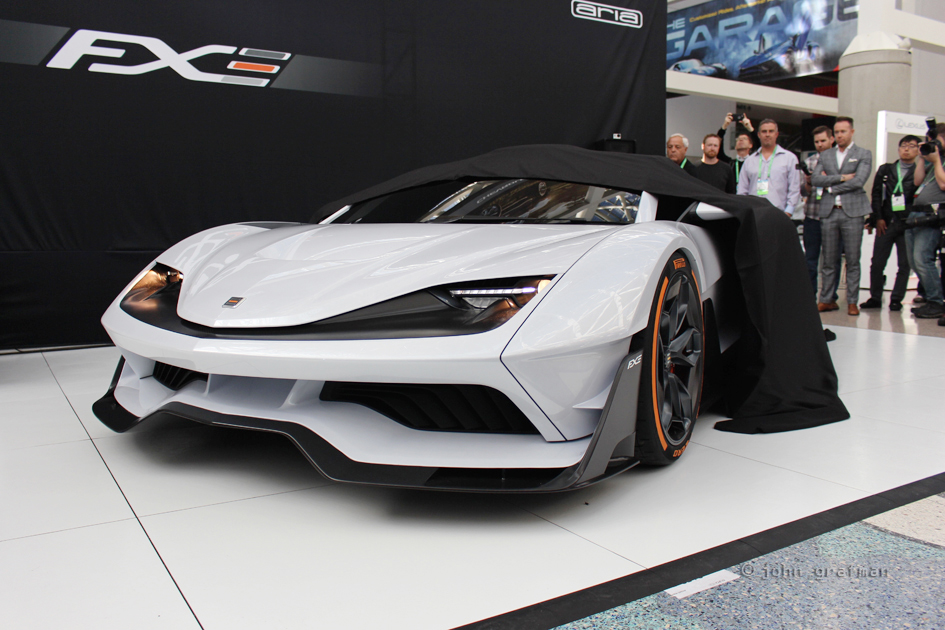 The Aria Group FXE is benefiting from a wide range of resources including project partners RAMPF, HRE Wheels, and Aircraft Windshield.

The price, unlike the car, is still kept under wraps.

AutoDesignO: Nicholas is going to tell us a little bit about their new project, the Aria FXE.

Nicholas David: Yeah, we’re really excited to have you here today and see the car. It’s a progression from the vehicle that we showed last year. Last year at the same we showed a car called Aria FE at a private event in LA. This year, well actually the last 12 months we’ve been developing the car in the background because it was so well-received. It started off as a design intent to show what we could do, and we didn’t really have much intention to build it at the time, even though we knew we could.

This year, after the show, it was such great feedback from the industry as a whole, as well as lots of prospective people who would like to buy one, so last 12 months we’ve been working on the aerodynamics of the vehicle, the carbon structure, the manufacturing process that we’d use. Mainly, as you can from the exterior and the interior, is developing the design of the vehicle. We’ve been refining it for aero, but also to make sure the car looks as good as it can look. 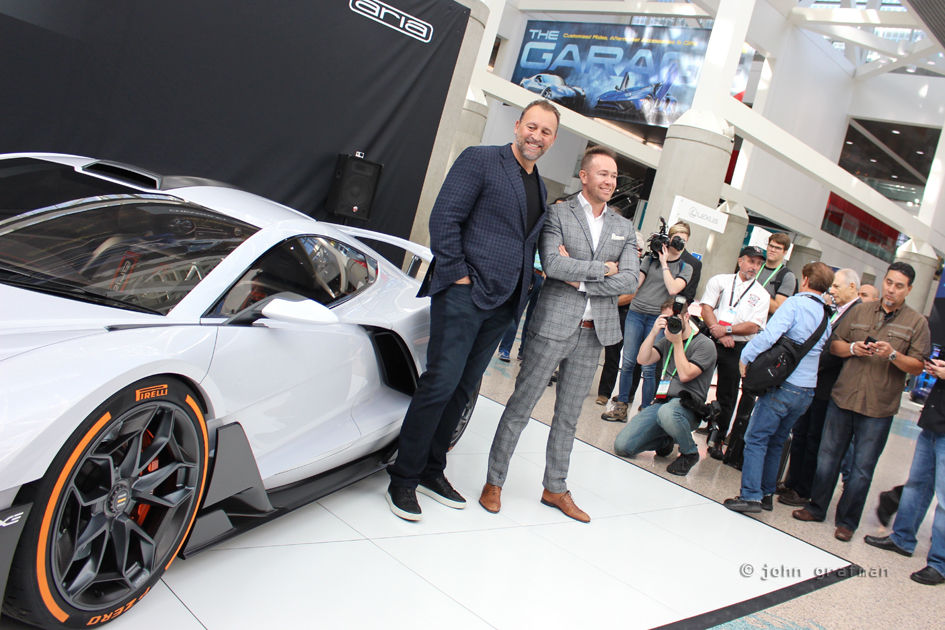 We’ve been working on the kind of basically layout of the vehicle, weight distribution, and just basically working with our partners to develop the suspension, the manufacturing process. What you see today is very, very close to what we will actually be launching, or actually be producing as a final vehicle. We’re still obviously working in the background on developing the car, it’s a long process, mainly with the aero team, and we’re hoping to have the first cars finished in 2019. 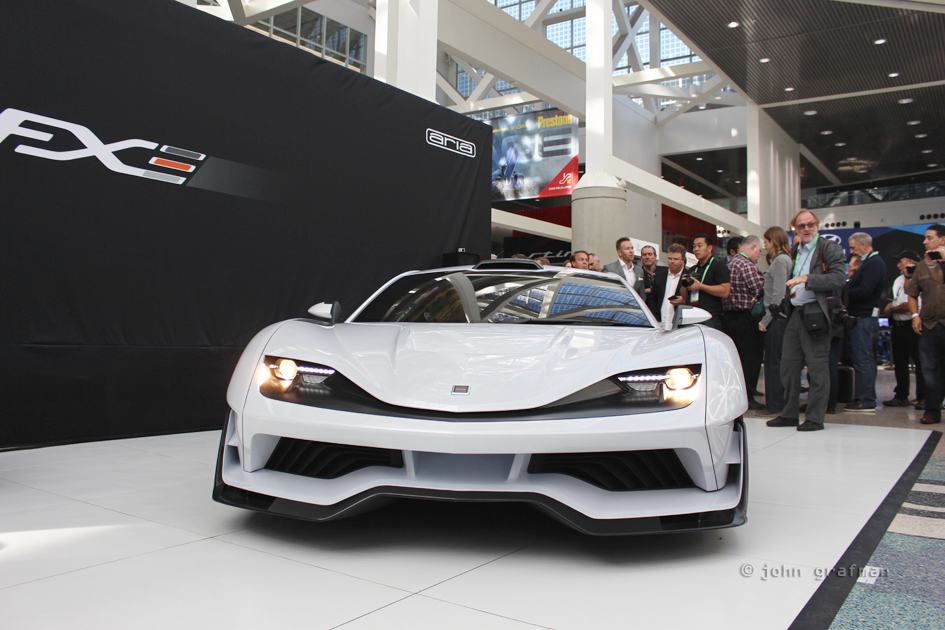 AutoDesignO: This isn’t Aria’s first rodeo. You guys know how to make a car.

Nicholas David: Yeah, very much so. Aria’s been around now for over 20 years, and until this point we’ve been building the show cars, running cars, pretty much all the car companies you can think of. We did the first Tesla mock-up, Fisker, we worked with all the major OEMs, as well as then during limited run production. The one probably most namely at the moment is the Porsche, Porsche as re-imagined by Singer. We have produced every single one of their cars until this point, which is probably over 100 now.

From that, and our experience with the other cars, we’ve learned how to tighten up our limited run production strategy. Having done similar cars for other companies, we know what is good, how the manufacturing process is, the building materials, how we kind of streamline that as much as possible. We decided with all that information and knowledge that we’ve gained, combined with obviously a great-looking design, I hope, everyone thinks, is that I think we have a really great package. AutoDesignO: As you said, this is a variation of the vehicle you did last year, but what helped inspire that vehicle and then the changes to that that we see here today?

Nicholas David: Well, when I say variation, this is more of a … This one’s been developed further, enhanced, refined to make everything better, concentrating on the surface development. But in terms of last year, some of the surfaces were a little bit stiff, and we did more package development, so the actual tracks got a little wider. The roof has come down about 1.5 inches. We developed a lot more the ergonomic study on the inside of the car, on the vision angles. But also, as you can probably see, if you put the original FE next to this one, you can see this is far more aggressive, and going towards a market that we feel this aggressive kind of styling works for.

It’s bringing some of that race car-inspired aesthetic to the road, because a lot of people are not using the car so much on tracks anymore. This still has that very American proportion in terms of the cab sits in the middle of the vehicle, as opposed to some of its European counterparts, where the cabin is very far forward over the front axle. It’s not so much of a cab forward car. It’s more like cab central, even though it sort of maintains the mid-engine engine layout. But then the front lights and the rear lights, they’re kind of hidden under the body to be secondary read. It’s supposed to be more about the form of the vehicle.

But as you can see on this vehicle, there’s a lot of striking kind of aero elements on the bottom of the car, which help channel the airflow around the vehicle, but also give it a very striking down the road look on the nose, and especially from the back with the very two dominant rear diffusers. AutoDesignO: What’s the next step in this project?

Nicholas David: Well, this is being developed as we speak even right now, back at our facility, so we’re developing the running mule to test all the dynamics, suspension. We’re still working with our partners in terms of developing the engine, how that’s going to be tuned. A lot of the development is actually being focused at the moment on the carbon fiber chassis monocoque. We have an integrated composite program. We just kind of have to come up with a very unique proprietary system to make the carbon fiber monocoque that you’re going to sit in, or the tub, because we don’t want to use an off the shelf, something from another car. This is supposed to be American-made from the ground up. AutoDesignO: You’re debuting this in LA. Do you see this vehicle being on the streets of LA at any point in time?

Nicholas David: Yes. We are very confident. As I said, I mentioned the date of being 2019. We are really confident that it will be when it will be on the road, hopefully all around the world, not just in LA.