Without a doubt one of the highlights of the motor racing year happens every April. In this not so sleepy seaside community in Southern California the circus comes to town and it’s called the Acura Grand Prix of Long Beach. Not only is this locale on par with the best, the weather is also usually perfect and the atmosphere of the event tingles with electricity. Aside from the changing in title sponsors from Toyota to Acura (AGPLB), this seems more than a little familiar. The 2019 running of the grand prix is really no different than what has come before, filled with thrills, chills and some of the best racing you could ever hope to see.

Article by Mitch Perry, editing and images by John Grafman

Well, maybe not so much on the best racing part. This years’ headlining Indy race is a non-event in terms of jaw-dropping action on the track. While a few attendees at the AGPLB might complain there is a serious lack of passing this year, race fans have to stop and admire the talents of Alex Rossi and his Andretti racing team. Rossi puts on a masterclass of how to dominate an IndyCar race. In a series where the whole field can be well within two seconds of each other from pole right down to last car in qualifying, it’s amazing to watch one car just so completely overshadow the rest from the first moment of the weekend to the last. 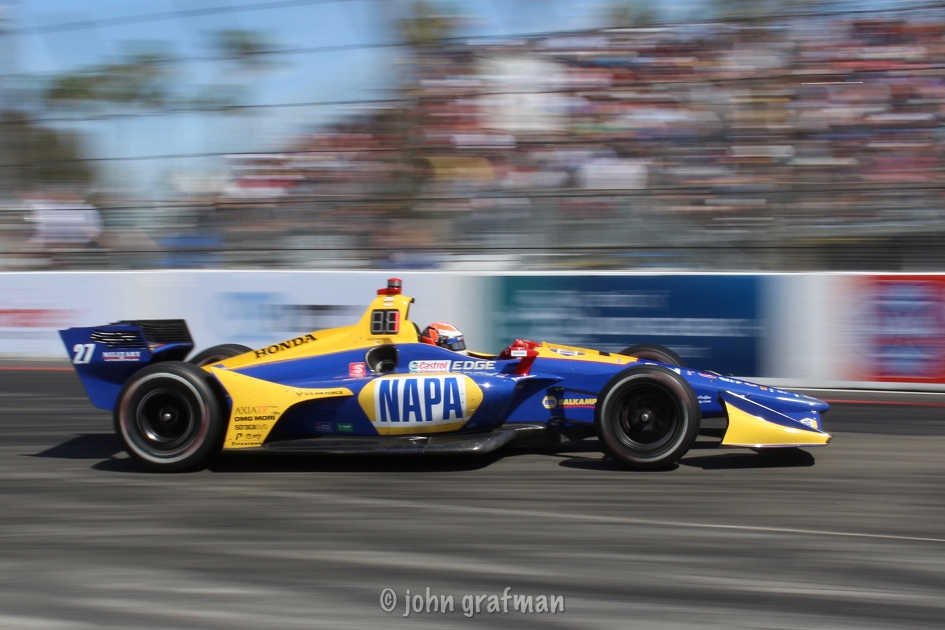 It’s amazing to watch one car just so completely overshadow the rest from the first moment of the weekend to the last!

As the AGPLB Indy race only features one caution period stemming from the inevitable first lap contact (between F1 refugee Marcus Ericsson and Jack Harvey) there’s just not much chance for the field to catch Rossi. This is because after he checks-out at the beginning there’s only one further incident on track, happening when rookie sensation Colton Herta makes contact with the turn-nine wall, becoming the race’s only retirement. He manages to do this without causing a caution, thereby the field never bunches up again.

When it’s all said and done, Rossi leads Penske’s Josef Newgarden over the finish line by over 20 seconds! Graham Rahal and Scott Dixon are trailing Rossi and Newgarden. Due to a controversial blocking call on Rahal, who does all he can to hold-off Dixon on the last lap (and then some, according to the stewards), reversing their finishing positions with Dixon gaining the final podium spot. 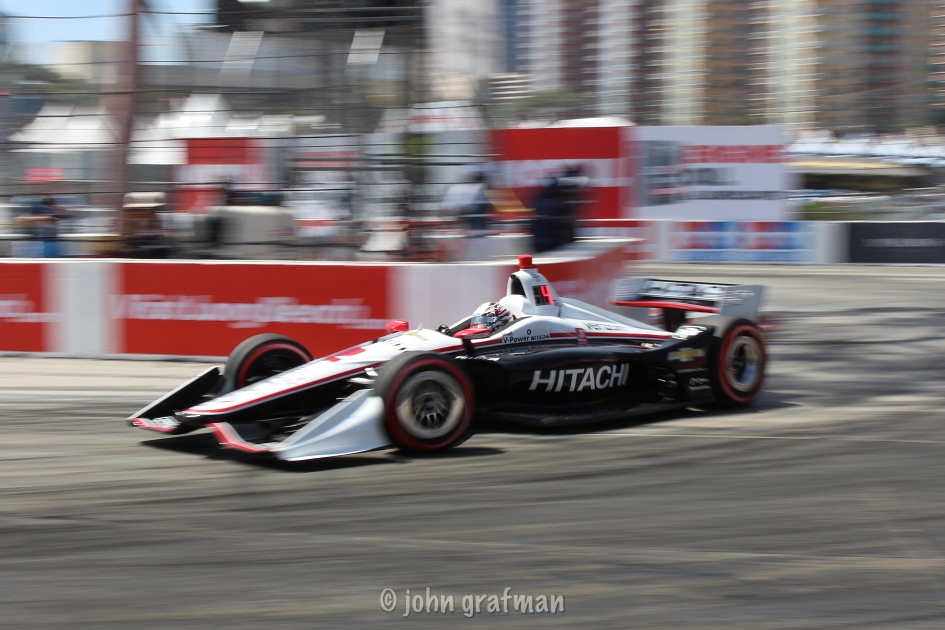 One of the things that makes the Acura Grand Prix of Long Beach such an awesome event is all of the other racing related stuff going on all weekend long. Case in point; the IMSA race on Saturday is a knockdown, dragged out, knife fight that ends up seeing Dirk Mueller’s Ford GT bumping into the wall on the last lap by Jan Magnussen’s Corvette while battling for second place in the GTLM class. You can almost be forgiven for not paying attention to Filipe Albuquerque’s excellent manipulation of lapped traffic during his battle with the Penske Acura of Ricky Taylor, leading to his winning the race overall in his Mustang Sampling DPi Cadillac for the second year running.

The IMSA race on Saturday is a knockdown, dragged out, knife fight!

The historic IMSA GTO class is a must see for any longtime Long Beach GP fan. The reason is, many of the cars running this event are cars that have made their name racing here in anger twenty to thirty years earlier. If attendees aren’t feeling nostalgic before they hit the track, those in the grandstands definitely have to be by the time they are done. The only thing missing is seeing Dorsey Schroeder driving that Whistler Cougar himself! Maybe next year. 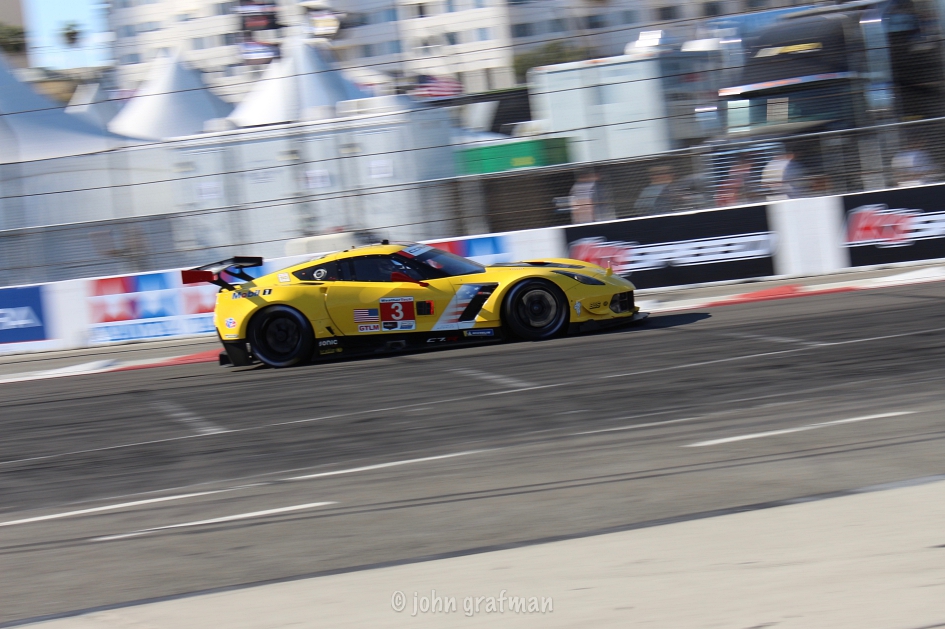 Add to these races the Pirelli GT4 America Challenge, and Robby Gordon’s Stadium Super Trucks. SST mega-horsepower, top-heavy vehicles have to navigate and overcome jumps and obstacles that are placed on the track . And, just to make sure that there’s something for everyone, there’s the Motegi Racing Super Drift Challenge as well!

Many of the historic race cars running this event are cars that have made their name racing here in anger twenty to thirty years earlier.

Of course, unlike some tracks that are out in the weeds, this is Long Beach. Once done watching the cars on the track at the AGPLB, fans can walk around the city-sized block party that is the Grand Prix and choose any number of activities they’re desiring. From being able to get behind the wheel and drive go-karts (courtesy of K1 Karting), dining experiences that range from King Taco to elegant restaurants, to attending the free concerts outside the track at the end of the day there is something for everyone. 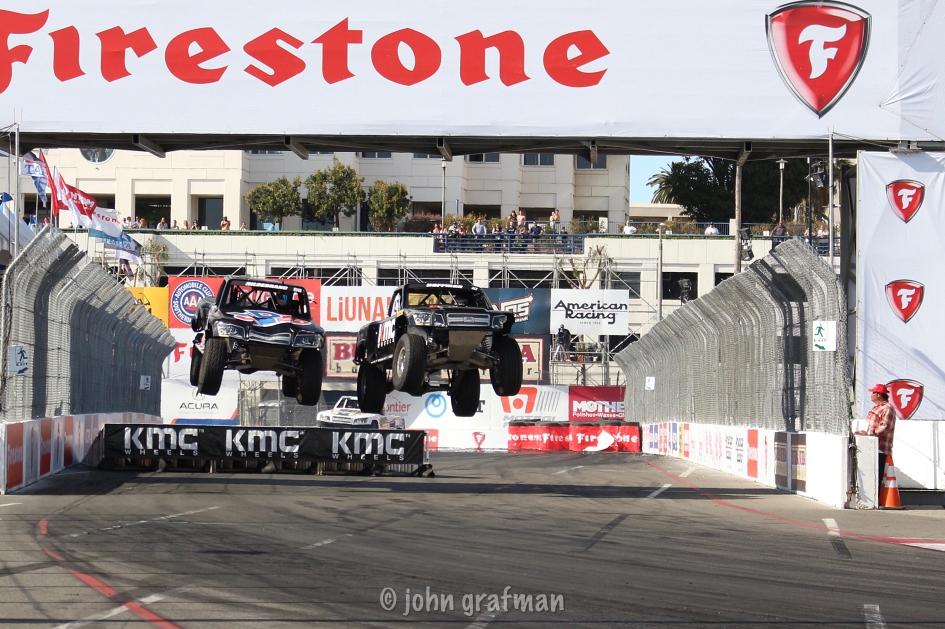 Perhaps next year when it comes to the bands, we get a little less Cold War Kids and a little more Cheap Trick, or maybe bring back the Cult onto the bill for next year! As the saying goes, make peace – not war. Let’s hope all the battles in Long Beach are happening on the track.

Either way, next year I will be back.

For more on the AGPLB – Driver interviews with Castroneves, Hinchcliffe, and Power  on the Acura NSX.
Designing for the track and the street with Dave Marek, Acura Executive Creative Director.