The 2020 Ford Escape at First Glance

The 2020 Ford Escape at First Glance

The showroom at Ford’s Irvine Design Studio is home to the 2020 Ford Escape on this April afternoon. There is very little fanfare or hoopla surrounding this product intro, with Ford letting the product do the talking. Nevertheless, Kate Pearce, Marketing Manager for the Ford Escape, and Tyler Blake, Design Manager at Irvine Advanced Studio, are on hand to verbalize what Escape can’t.

This is Blake’s first eyes on the actual production vehicle, and his comments come as he’s gazing upon the new design inside and out. “The Escape here, kind of progresses Ford design on the Escape to a more sophisticated level … a lot better fit and finish,” states Tyler. “It’s made leaps and bounds as far as the interior and exterior fit and finish, and it’s incorporating a lot of the aerodynamics features that the customer’s really after.”

Tyler Blake continues, “I think they really upped the quality, perceived quality and the actual quality for this vehicle, and the proportions are pointing towards the future, and the surfacing is as well. I think this will be a successful vehicle.” Kate Peace delves a bit deeper, as she’s managing this model, at least from the marketing standpoint.

This is a ground-up redesign of the ’20 Ford Escape. It’s a small utility vehicle, and we work really closely with our design team to understand what it is that customers are looking for in their vehicle.

They’ve done a great job of getting the proportions right on the Ford Escape, and really creating a vehicle that stands out on the road.

“The first thing that we noticed was there are a lot of utility vehicles on the road, and they’re all starting to look very much the same,” plainly says Pearce. She tells us, “It’s almost becoming a commodity. So, when we spoke with our design team, we gave them the inspiration to want to go out and do more, and really create a vehicle that stood out on the road. “And they’ve absolutely delivered. This is a vehicle that looks like none other. Really sleek lines. It’s a vehicle they think looks great in the city, but it’s also capable enough to take out to the beach. They’ve been able to lengthen the vehicle a little over two inches. They’ve made it about a half inch wider, which gives it a much more confident stance. And they’ve actually brought down the roof line by just a little bit under an inch. Again, really giving a very sleek, aerodynamic look to the vehicle, while still maintaining interior space. So, I think they’ve done a great job of getting the proportions right, and really creating a vehicle that stands out on the road.”

In questioning such a deviation from the prior generation’s design to a softer feel, Kate explains, “Again, it really was about … the design direction from the team was really to create a sleek, modern, sophisticated vehicle. And I think that that’s really what they’ve done. The smooth lines that go through, the way that they’ve been able to introduce character lines into the side of the vehicle. They have left no stone unturned in ensuring that aerodynamically and from a design perspective, they’ve delivered the ultimate vehicle.”

The design direction from the team was really to create a sleek, modern, sophisticated vehicle

The non-traditional front-end is bold sans-bumper and stands apart from many other SUVs that have tougher, formidable image. “Well, the designers actually took some cues from within the Ford showroom,” Kate Pearce informs us. Kate continues, “There’s some design cues in the front grille from the Ford Mustang. There’re also a few design cues from the Ford GT Performance vehicle in the front end of this vehicle as well. “But, they’ve given it a really unique Ford Escape design. So, they’ve taken inspiration in a few places, but they’ve really created more of an abrupt front end, a really tight line in the design.

“So. The design team really looked to the Ford showroom for some of their inspiration. You can see some elements of the Ford Mustang, truly a sleek and exciting vehicle. There’re always a few cues from the Ford GT. But they wanted to ensure that those cues came in the form of a truly stand-out Ford Escape. 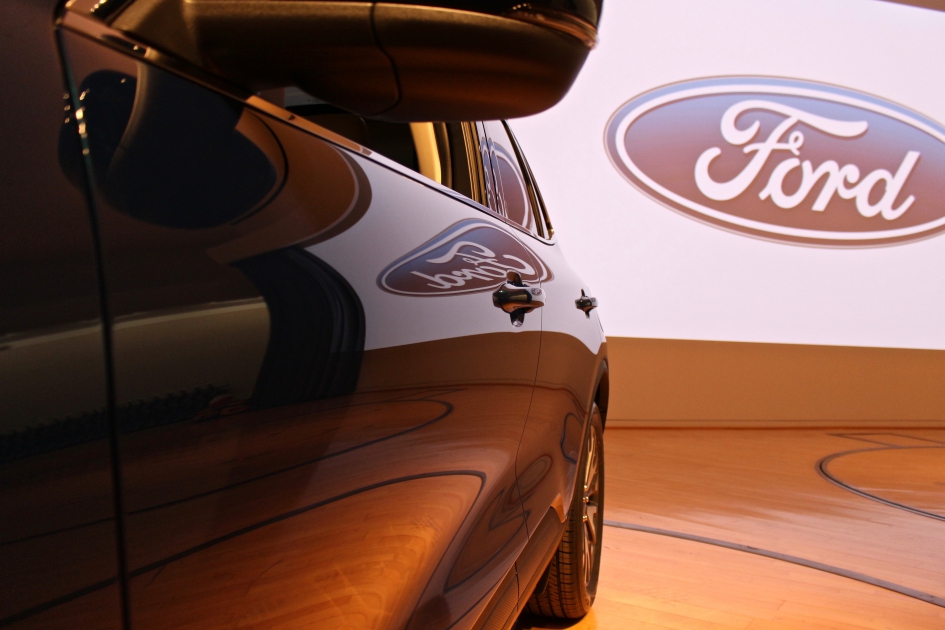 Like it or not, the 2020 Ford Escape is a departure in character from the model we’ve come to know over the past seven model-years. Beyond a doubt, Ford has done its homework, and this will appeal to the masses.

Ford has sold more than 4.5 million in America since its introduction and the Ford Escape is the company’s best-selling vehicle behind the ever-popular F-150

A little background for those unfamiliar with it, the Ford Escape debuted in North America back in 2001 and became America’s top selling small SUV in its first year. In the 2005 model year, Ford became the first OEM to offer a hybrid SUV. The third-gen Ford Escape came in the form of a 2013 model. To date, Ford has sold more than 4.5 million in America since its introduction and the Ford Escape is the company’s best-selling vehicle behind the ever-popular F-150. In short, the Escape is vastly important to the brand, and any decision on styling isn’t taken lightly. The 2020 falls on the cusp of the technological advancements found in drivetrains. Sadly, this is still powered by an internal combustion engine or hybrid. On the bright side, the EcoBoost engine comes in three sizes, 1.5, 2.0, and a 2.5 liter. The best in class hybrid can travel more than 550 miles, per the EPA estimates. Way down on the data sheet is one point that seems worth commenting on, the compression ratio. More specifically, the 2.5 FHEV features a 13:1 ratio. However, it’s good for just 198 horsepower, while the 2.0-liter EcoBoost (non-hybrid model) with just 9.3:1 is rated at 250 ponies.

The design, power, the additional interior space, new technology in terms of near self-driving and accident avoidance technology, and the sliding rear seats might give the Ford Escape a leg-up on the competition.

Find out more on Ford products