The Eye Of The Storm on Cars 3

Home/Articles/The Eye Of The Storm on Cars 3

The Eye Of The Storm on Cars 3

Pixar’s Jay Shuster (Production Designer), Michael Comet (Characters Supervisor), and Jude Brownhill (Directing Animator) get down to the details on the Cars 3 animation process and bringing an idea to life on the big screen. A Storm is headed our way in this AutoDesignO exclusive interview.

AutoDesignO:  What stood out when you were working on this (Cars 3), as compared to the prior Cars and Cars 2 movies?

Jay Shuster:  Well, I think for me personally is the scope of Cars 3 and the couple of different worlds that we get a glimpse into so far as … not only do we see more of the race world and this new generation of racers, but we go into the backwoods with the Crazy 8s. We have these flashbacks with the legends and kind of Doc’s glory days and things like that. So, that’s what, as a character designer, stood out … That really excited me, to go into these different worlds that we haven’t seen before in the first two films and build those out. 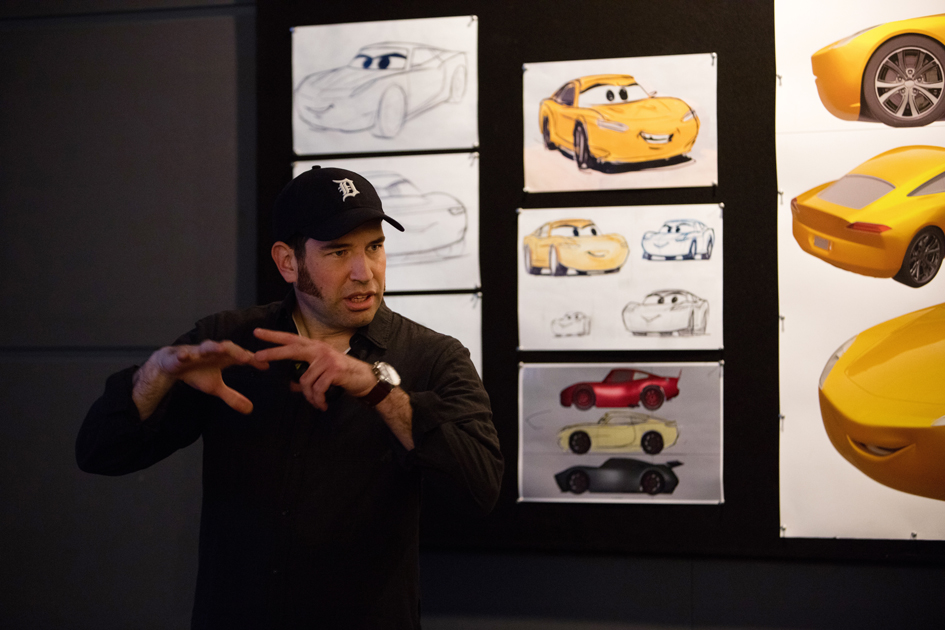 AutoDesignO:  As far as the detail in the modeling, this looked a lot more refined.

Michael Comet:  It is. I think that’s another big difference from the previous films for us was the models are more detailed. We can put more geometry in, more details, more flexibility. The shading is also very up-to-date, I would say, like I talked about so there’s things like metal flake paint, details how that looks and the density. There’s the fact that we really try to duplicate how the paint looks as far as like having the clear coat shininess versus the paint shininess, micro facets or micro scratches, things like that.

And, we are using a new rendering software, like an updated version of our rendering software and that was new – RenderMan, but it’s been kind of up-to-date, basically a new rendering technique that is very accurate for how light bounces and moves around and all that. We’ve been using that since Finding Dory, so it’s still relatively new. But that alone, it just yields a different feel, a look to the film.

And you put that with the set design and set work that the sets department did. You look at some of those beach scenes, some of the backgrounds and things like that, they look almost photo real. And so, our cars are still grounded and they have to work in that environment, as well. So it’s just all that focus from the design grounding in the real world mixed with that technology that we now have that keeps getting better.

AutoDesignO:  Did it take longer or did the software really make the difference?

Michael Comet:  You mean as far as the process of like creating the characters taking longer?

AutoDesignO:  That and the quality overall?

Michael Comet:  Sure, yeah, it’s funny because I think back in the day, people were like, “Oh, you can do all this stuff eventually in real time.” But the reality is, every time something gets faster, then there’s more that you put in to the image. Some of our frames still took hours and hours and hours, if not days to render, just because now it is more accurate. So, there’s more calculations to do. And having a more detailed model means it takes that little bit of extra time to put that in, to put that detail in or to put the shading in. So, we’re spending more time, but it’s looking better. I don’t know that this is really faster or slower than the previous films were, but I think for the same amount of time the quality is just that much higher.

Jay Shuster:  Plus, John (Lasseter) is all about truth in material in the making of all these Cars films, and I remember getting the directive from him regarding this new rendering capability we have is to really exploit the layered glass, and the architecture, just really make the environments and the characters as rich as possible.

AutoDesignO:  As far as the clay modeling is concerned, how many people do you have working on that? Or, does it come down to just a few people and from that really springs the characters?

Jay Shuster:  Just one – Jerome Ranft. And, did you see his presentation today? Yeah, it’s just him. On these characters, we really just basically sculpt the main characters. We’ve got hundreds of characters designed for these movies, but we only really clay sculpt the first tier, like Storm and Cruz. Really, those were the only two that we sculpted this round.

Michael Comet:  I think so. I don’t remember. Did we do Sterling?

Jay Shuster:  No. We didn’t do Sterling. Everything else kind of fell away. So, we really concentrated our efforts in clay on the characters that matter the most.

Michael Comet:  We have a team of about 35 character artists, and about half of those were shading artists, and the other half were digital modeling and digital rigging. There’s a team of modelers.

Michael Comet:  But not in the clay. There’s one clay artist, and then we have our team of digital modelers that work on the computer.

AutoDesignO:  I understood before that there’s 250 people working on the modeling of the whole project. Is that correct?

Michael Comet:  That would be 250 people on the film.

AutoDesignO:  And they just move from project to project, so when this is over they hopefully stay?

Jay Shuster:  Yeah, yeah, when people cycle off at any point in the movie that they’re either scheduled to or needed on another project, it’s just kind of a constant rotation. At some peak we do reach about 250.

Michael Comet:  It depends on the department and what your casting is, like I started here in 2006, so a little over 10 years. I worked on Up and Brave, Good Dinosaur. There were other films in between there, but I skipped those films because I was on the other films and they were kinda overlapped.

Jay Shuster:  Well, there’s this group of us, that we’re kinda diehards … The only influx of people … We’re here, we’re kinda like the design core of the film. We seek inspiration from the outside. We brought J Mays in to get his take on Storm. I came from automotive industry back in Detroit, so every so often I get this pang or this desire to maybe go back. But, then I think about it … It’s like, well, there’s so much creative freedom here, and not only are you designing a car but you’re designing a character and the world around it. Unless it was a gig with McLaren to design the next car coming out of there, I just don’t know what the benefit would be to- 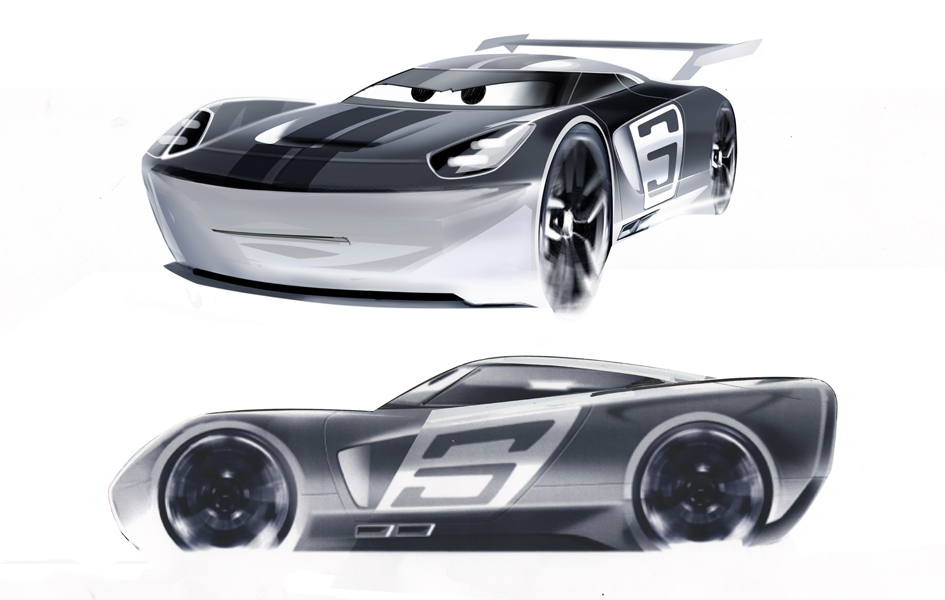 Michael Comet:  I heard Porsche just opened a studio down in Santa Clara, just saying. [laughter from all] It’s funny you know art wise a lot of the guys have Master of Fine Arts or Bachelor of Arts, and some of them I think have had just industrial design backgrounds are working in the industry. That’s also fairly common. It’s not necessarily specifically automotive design, but it’s all related. And, that’s definitely a way that people enter the industry. The other side of course is technical programming, a computer science background, we have everything in between here at Pixar. That’s what I love about this. It’s that merging of digital and artistic and everything in between.

AutoDesignO:  One final question (well, almost). Certainly, you’ve been influenced by the automotive world. Do you think you’re influencing transportation design, as well?

Jay Shuster:  That’s another thing that John (Lasseter) from the get go, from the first film… he was way into this idea that create these characters and these cars and these environments – and down to the detail, down to the graphics and whatever. That might inspire someone on the outside to build it for real. Like inspire the next trend in automotive design or aftermarket style stuff, but I don’t know … I think we all take our jobs really seriously. I’m approaching the design of Storm for instance, as seriously as anyone in Detroit would approach something they’re designing, and I think it looks good. I think he warrants the attention, but I just don’t know if people are going to give him as much creed as they would if he were being released to the Detroit show in January or something like that.

AutoDesignO:  Or, not just the movie, but how you guys operate. Do you think there’s a lot to be said abut that, and the creativity you have here (at Pixar)?

Jay Shuster:  I think there is, yeah. I think we’ve got a pretty special process here. I mean it’s not hugely different from most production houses that are-

Michael Comet:  Yeah but the overall process step by step is probably similar but … There’s definitely a really collaborative creative spirit at the studio.

Michael Comet:  I think that is definitely one of the top.

Jude Brownhill:  I think everyone’s opinion is valid and we often do the screenings and get people’s notes from … Anyone can give a note if it were something’s not landing or a character’s not hitting, so it is very collaborative.

Jay Shuster:  And its very much like the car industry. It’s iterative, it’s collaborative.

Jude Brownhill:  And, we’re all trying to communicate with our section of the pipeline, specific things to specific characters. So, like Storm had to be a threat so from the design, to the way that he was shaded and modeled, to the way he was animated – across the board we were all the trying to convey the same thing.

Jay Shuster:  It’s a fun place to be!