Rocking Creative Talent To The Core

Home/Articles/Rocking Creative Talent To The Core

Rocking Creative Talent To The Core

In numerous ways the auto design biz and the music industry have undebatable similarities. Both require imagination and talent that comes from years of trial under fire. Those that are not making the grade often fade away. However, the cream of the crop become the polished professionals we all are aspiring to be.

Of course, there’s always the random, cocky designer, modeler, musician, or other creative talent, boldly stating, “I could do the job with one arm tied behind my back.” But, what if the same person actually loses the use of an arm, hand or eye, or is saddled to a wheelchair?

At the Rock Against MS benefit concert, we are getting a deeper appreciation for the abilities that each of us are endowed with while getting to support those that are not as fortunate. The underlying cause is serious; however, this evening is far from drab and dark. 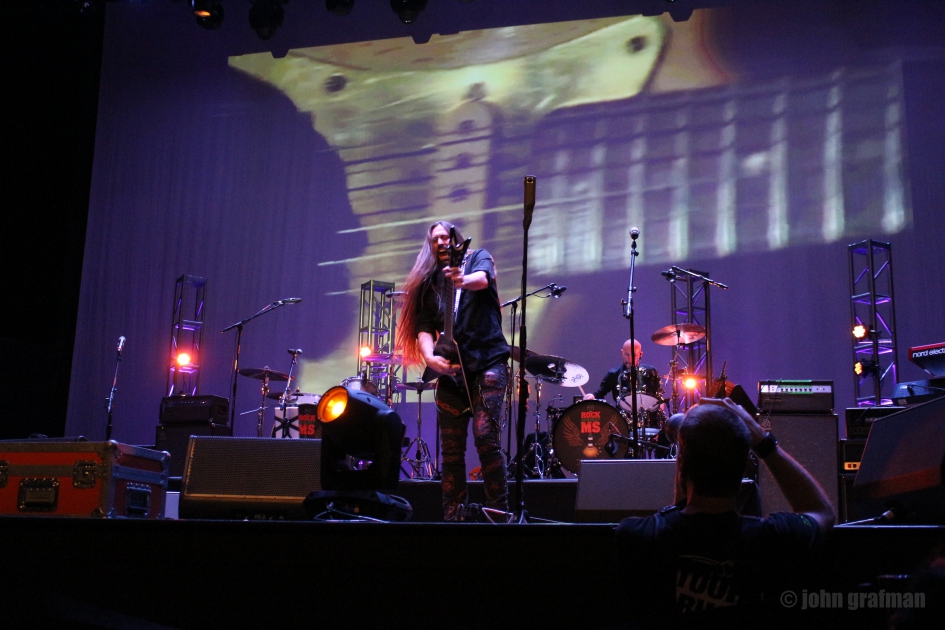 At the Rock Against MS benefit concert, we are getting a deeper appreciation for the abilities that each of us are endowed with.

Stephen Perkins (Jane’s Addictions) and Marky Ramone (The Ramones) on drums, Hal Sparks (host), Matt Starr (Mr. Big), Tiffany, Marq Torien (Bulletboys), Howie Simon (Winger), Debra Wilson (host), Thomas Ross Johansen (Strawhorse Studios), and more, elevated this from just another slammed together jam into a must see “before I kick the bucket” night. Actually, this wasn’t a jam at all, but a rehearsed and coordinated effort. 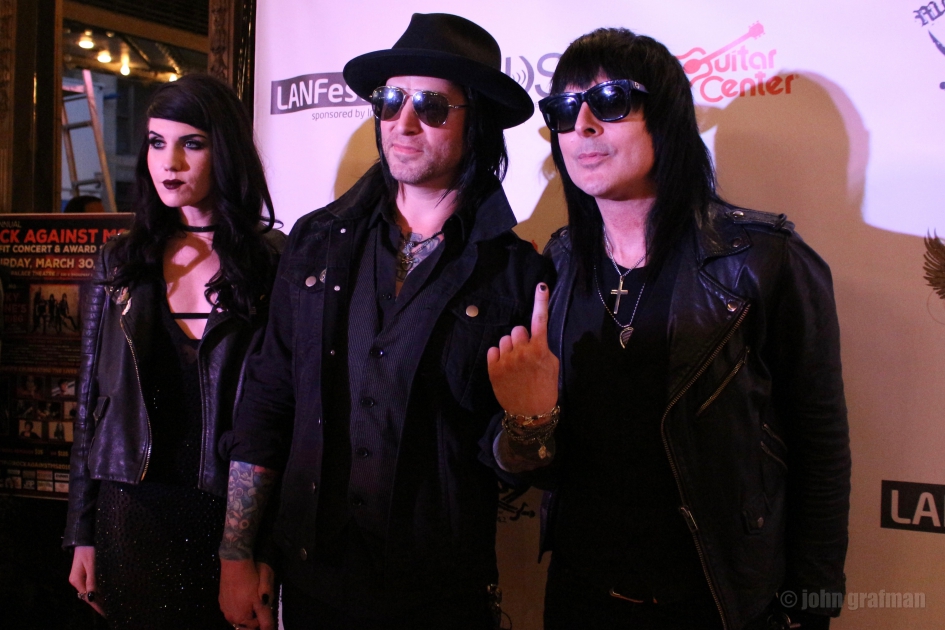 Lights, action, and plenty of cameras are invading the red carpet before the gig kicks in. You know this is LA when characters like Andy Dick just start randomly showing up. However, when there’s a cause to support as important as this, well, it just one more reason to reason to be here.

For those that don’t know, Multiple Sclerosis (MS) eats away the protective lining of nerves like old age eating away the insulation on electrical wiring in a car. The result is a disruption that can vary from one individual to the next in terms of the effect and level of significance. Needless to say, this is way worse than Lucas electronics in the 60s.

Needless to say, this is way worse than Lucas Electronics in the 60s.

Nancy Sayle, CEO of Rock Against MS, and one of those unlucky to be directly affected by MS (along with cancer), is taking on the disease in her own special way.

Nancy has an ace up her sleeve. As a publicist in the music industry, Sayle has built strong bonds with a number of legendary musicians. When the chips were down, those musicians stepped up to the plate. 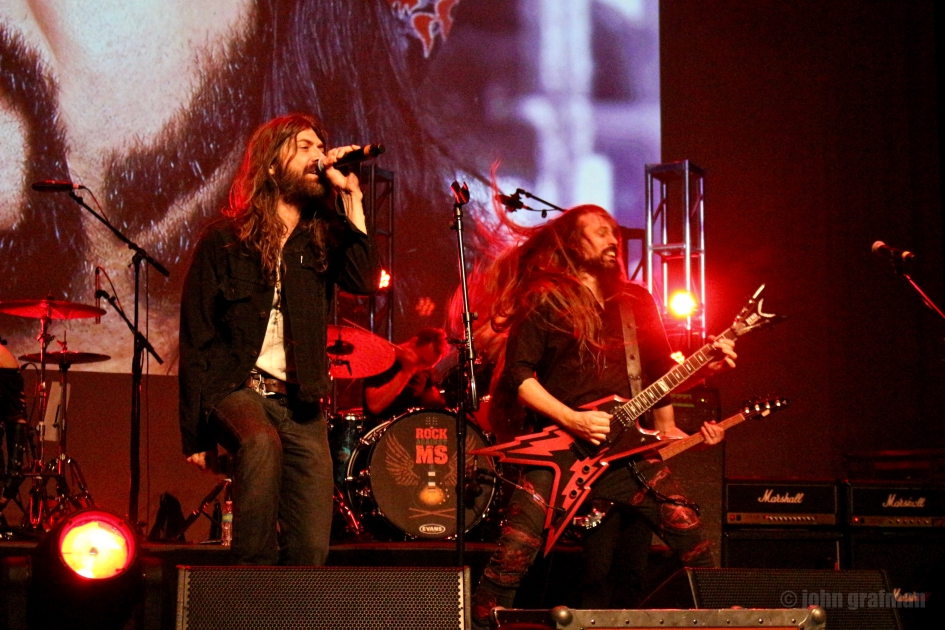 She heard her diagnoses (initially a brain tumor) at Steve Stevens’ (guitarist with Billy Idol) house/recording studio, and Steve said, “Oh my God! Like, enough’s enough. We’ve got to do something for you after 30 years of doing stuff for us.” And he came up with a plan doing something like Camp Freddy, Kings of Chaos and all the other super groups, just to raise money for Nancy. And so, he said, “Let me talk to Billy.”

He went and talked to Billy about the plan and he got Billy Morrison, who’s the other Billy of Billy Idol, and they said, “This is great!”

Sayle explains, “By January of 2013, the show was born, and we had everybody from Rob Zombie’s band, Marky Ramone flew in, the guys from Foo Fighters, Rick Springfield, Orianthi. I mean, you name it. It was insanity.”

They were playing five straight hours at The Whiskey to raise money for her. Nancy thought, “Let’s turn this into a foundation, so we can help people now.”

They were playing five straight hours at The Whiskey to raise money for her. After that, Nancy realized people don’t have what she has … which is a really amazing people willing to make a difference. Nancy thought, “Let’s turn this into a foundation so we can help people now.”

Along with the benefit concerts, Sayle put together Pistons ‘N’ Pinups in August of 2016. That event blended car culture and hot rods along with music at the Valley Relics Museum. The entertainment came to life with Gilby Clarke, Phantom Pomps, as well as Maureen and the Mercury 5. The four-wheeled excitement ranged from rods to muscle cars, and even a Gene Winfield pick-up provided by Galpin Ford. 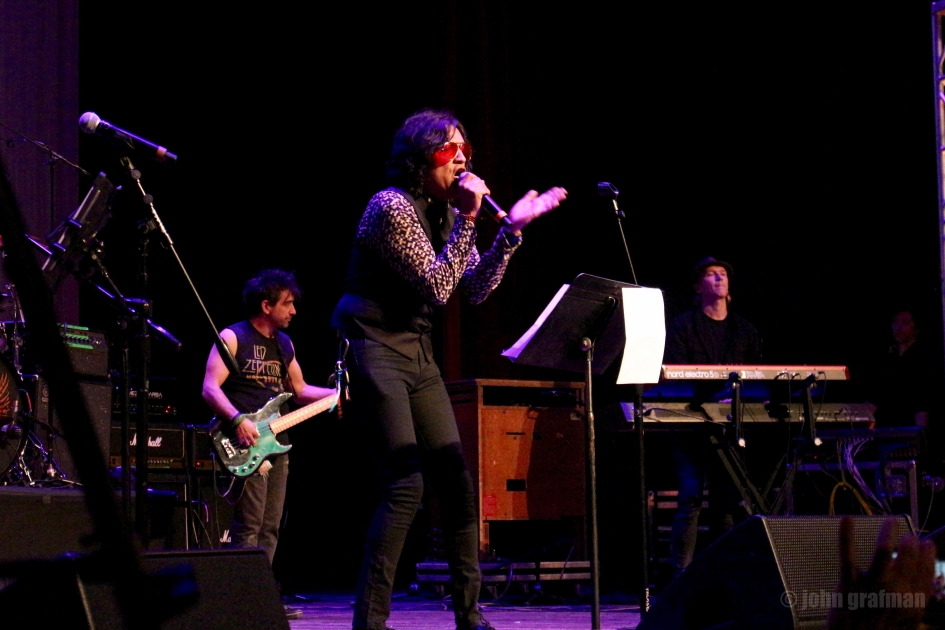 When I ask the magic question, why do it, Nancy divulges, “Well, I’m a car nut to begin with. I’ve always liked hot rods, Harleys. I’m a biker. So, I thought, God, how much fun is that? I wonder if I can do this. And, I’ve put on biker events before, years ago. And I thought, Well, let’s see what I could do with cars. And my friend owns the Valley Relics Museum. That’s Tommy Gelinas.”

“I have another friend, she does pinup work. Kimberly, she headed up the contest with the girls. I made sure we had all the trophies, because I go to car shows all the time.”, says Nancy. Sayle even has an old ’61 Chevy Fleetside sitting in her yard needing some love and restoration.

Well, I’m a car nut to begin with! I’ve always liked hot rods, Harleys. I’m a biker. So, I thought, God, how much fun is that?

On the night of the benefit concert in downtown LA on April 2019, a bunch of rock and roll musicians gave up their time to support this cause. Sure, many musicians are altruistic, but does it go deeper than that? 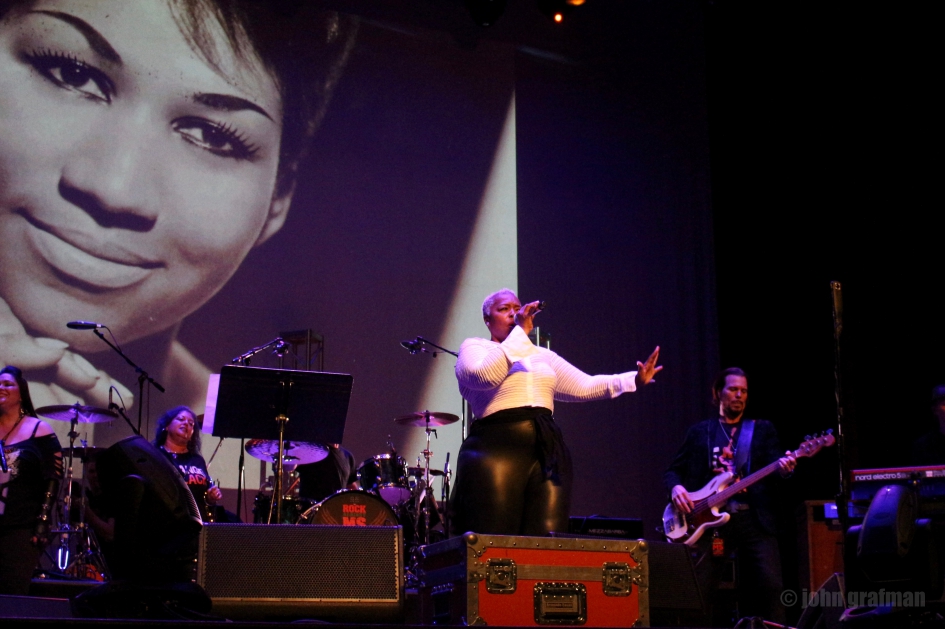 Sayle tells us, “I’ve been in the music industry a super long time, so I know everybody whether they’re a friend or a client. I forced them. No, I guilt them [laughs]. No, wait a minute… they just like me and they’re really excited to be a part of it because it’s like… you know, all these ultimate jams and stuff have come up.”

Taylor Hawkins from Foo Fighters looked at me and he’s like, hey, darling… was that Marky Ramone?

“We’ve made this really sleek thing as more of a show. Hopefully. We’re getting there. For production purposes, it’s not just a jam. These people rehearse. They get excited to play with each other. I mean, it’s so weird’” says Nancy. “I had Taylor Hawkins from Foo Fighters look at me and he’s like, hey, darling… was that Marky Ramone? And I said, yeah!”

And he’s looking at me, and she thought, “Oh, you don’t know him? Oh, you want to meet him? Okay. It’s kind of like this cool high school reunion. They do it for that, and they want to help if they’re not on tour. None of them ask for money. They do it for, I guess, for the good of the project.”

Those entertaining the fans have connections with MS besides Nancy. Some of them have parents that have passed. Steve Perkins, from Jane’s Addiction, had his share of MS in his life. His father had passed from that.

Orianthi came and played, and she’s going to play the next show. She too had a family friend at home in Australia with MS. Sayle explains, “Everybody’s got somebody. MS is interesting. It’s kind of like when you buy a car and all of a sudden you see that car everywhere. Otherwise, you would really never see the car. Right?”

On the red carpet this year was rock royalty, Slim Jim Phantom of the Stray Cats, and accompanying him is the ever-so talented and dazzling Jennie Vee. Certainly, Slim Jim is no stranger to cool cars. Initially, rockabilly was not exactly mainstream in the 80s, but fans quickly ate it up, in part because the band embraced car culture. 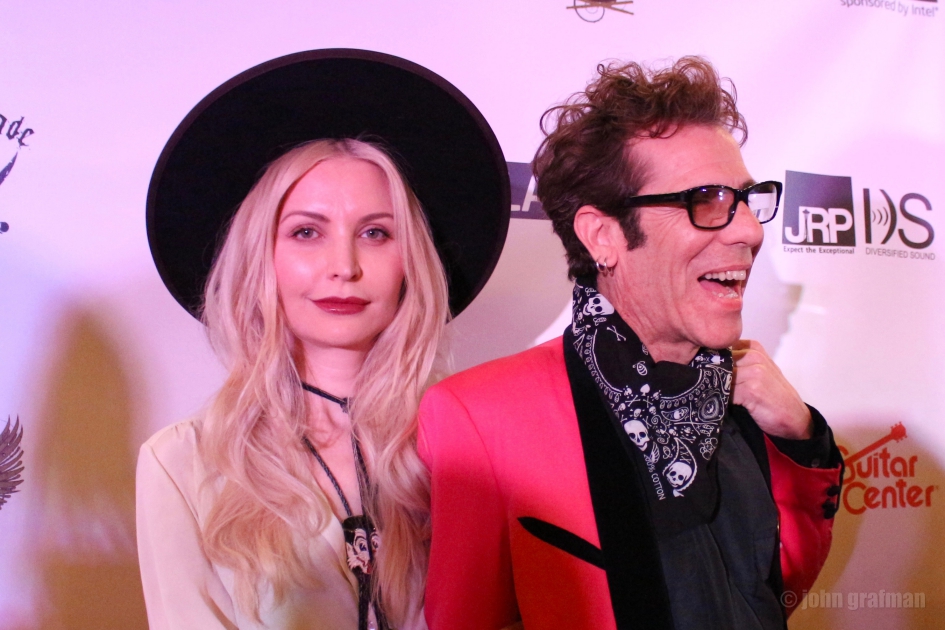 I had to ask the obvious, although it’s almost rhetorical, “Do you feel there’s a love affair between musicians and automotive?”

The CEO of Rock Against MS perks up, “Oh God, yeah! I mean, how could there not be? And it’s funny, because you listen to all the music. Rockabilly to me is like an overview. But, when you start hearing the surfing music, like the Dick Dale stuff … bless his heart. And then you hear … God, even the Ramones, they’re punk, but yet they’re not. You know what I mean? Because the Ramone’s fit car culture.”

“So, I think when you say rockabilly, I think it actually embraces a lot of that kind of poppy, big bass swing, jump-jive, that kind of stuff. And, cars are just a part of it.,” says Nancy. “I mean, look at all of our movies with all the cars. The old movies that have all the different cars in them. You just can’t not associate that style of music with cars because it’s what it is.”

Clearly, multiple sclerosis is devastating, rendering anyone, from a designer to a guitar player, vulnerable. The problem is blatant.

Clearly, multiple sclerosis is devastating, rendering anyone, from a designer to a guitar player, vulnerable. The problem is blatant. Yet, many of the other non-profits that are dedicated to fighting MS don’t focus on direct assistance to those with the disease. So, we have to ask, what’s the next step for Rock Against MS?

Sayle spells it out, “I’m doing research right now to put together the proposal. We want to build the first Rock House. It will be here in the Valley. It could be Chatsworth to Northridge area. It will be named after Richard Pryor, in his honor.” 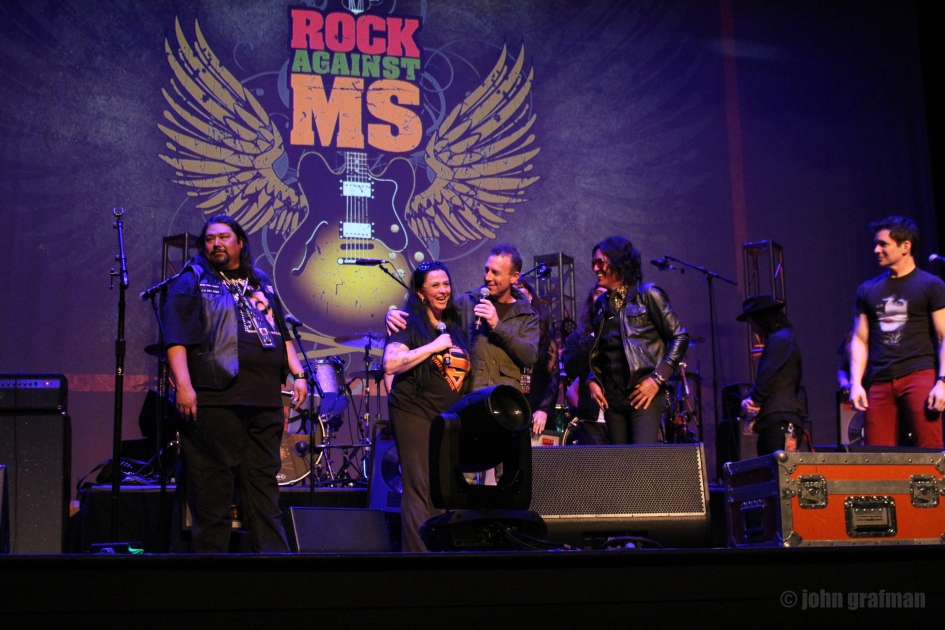 “The Rock House will be for people with MS, family members, and caregivers. They can go there and get different types of therapies, whether it’s emotional therapy, physical therapy, acupuncture, working out, getting your hair done. I want to teach them how to cook. I want to start converting them into vegan because it’s very important to change your food. So, it’ll be this whole resource center.”

“It’s actually based on ‘weSPARK’ (for those battling cancer). weSPARK is amazing. Wendie Joe Sperber (from Bosom Buddies, Back To The Future, and Used Cars), created this before she passed from cancer. It’s a great resource center.”

“It’s going to be super based on that. We’re going to have a few things that they don’t have, which is like the cooking facility area to teach people how to cook. Also, we’ll be getting in X-Pool, and X-Pools are for exercising to keep people moving. It’s not a swimming pool, it’s totally physical therapy.”

“We want to offer this. What people don’t understand is people are losing their jobs, their homes, everything. Because they just can’t… I want to hear them say, “I can.” And I want to get them to start doing more holistic-y things where they actually can start healing.”

“We’ll start building Rock House. One will be here, the next one will be in Seattle. One in New York. And then we’ll start doing major cities. But for the people that live who live in the outskirts, we’ll have three program systems that we’ll make you apply for. One will be for holistic care wherever they’re at. Meaning acupuncture, reiki, whatever. Pilates, yoga.”

“We’ll be able to call up in their area to work with that person or that group of people. And, then the other one is daily care. Some people can’t get out of bed. I want to be able to offer people help, whether it’s grocery shopping, getting rides, (daily personal needs) and whatever they need.”

“And then thirdly, I’d like to have a legitimate amount of money funded (to assist those with MS). Not just $300 every 18-months, but, depending on what their needs are.”

“So, we thought, Let’s start with the Rock House. If we built it, they will come. That’s my goal!”