Is clay modeling dead? It depends on who you ask. Jerome Ranft at Pixar will tell you it’s alive and kicking. Actually, the process at Pixar has one man, Jerome, shaping all of the major characters in CARS 3. Clay is an indispensable aspect in the development of the digital figures, and they wouldn’t have it any other way! Here’s part one in AutoDesignO’s two part series featuring Jerome Ranft’s own words on how the magic happens.

Jerome Ranft – I went to school for just figurative sculpture. Conceptual art was where I got my degrees at CCAS, and we did a lot of abstract conceptual art. It was that typical ’90s, late ’80s art school hoo-ha. When I got out of school, I needed a job, so I got my first job on the “The Nightmare Before Christmas” and I was working with Bob Pauley and Bill Cone, who were the guys who hired me here at Pixar. I ended up working with both those guys on Cars 1. I did know what I was doing, this is the first car sculpted, it was Luigi and it was under scale. 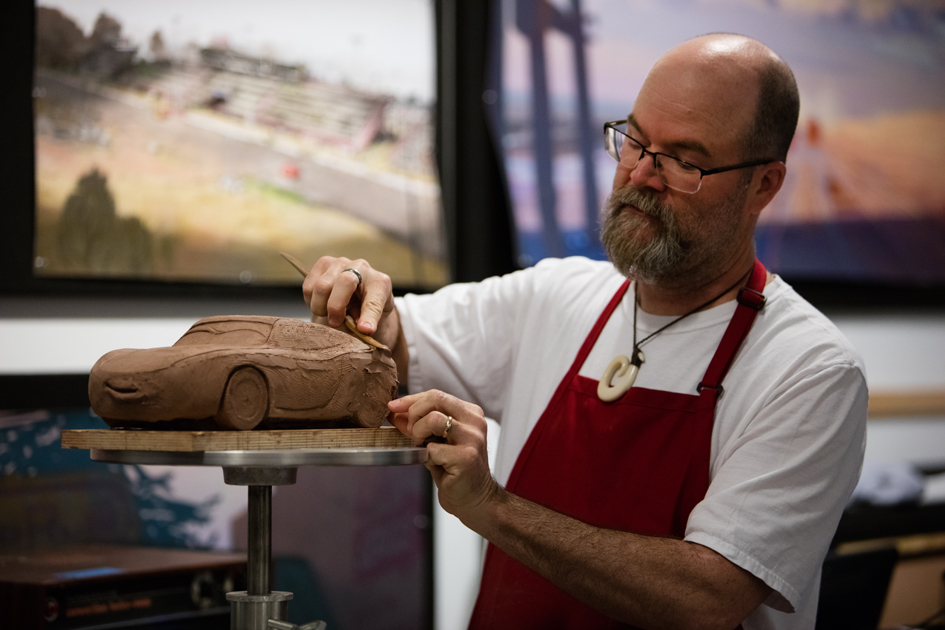 I had a roommate in college, Jay Ward, who also had a love and passion for everything mechanical, everything cars, so it sort of rubbed off a little. I drive an F-150 and I’m psyched when it starts. That’s about as far as it goes for me. Cars as sculpture, is something that Bob and Jay and John (Lasseter) really opened my eyes to. Even when I’m stuck in traffic every day, driving here, I look at cars as sculpture.

I included this one just because I like it. Between that first one of Luigi and this car, Joe Farrer came and gave us a talk during Cars 1. I don’t know if you know him, I did know who he was before, but I felt like he was just talking to me, because he used to teach car design at the Art Center (College of Design). He was an ID, an Industrial Design guy. We both had clay in common and by the end of the day, he was making fun of me, which I loved. It was like a warm hug from that guy, because he was laughing at the way I worked. He actually gave me some tools and sold me some tools that I’ve used here ever since. 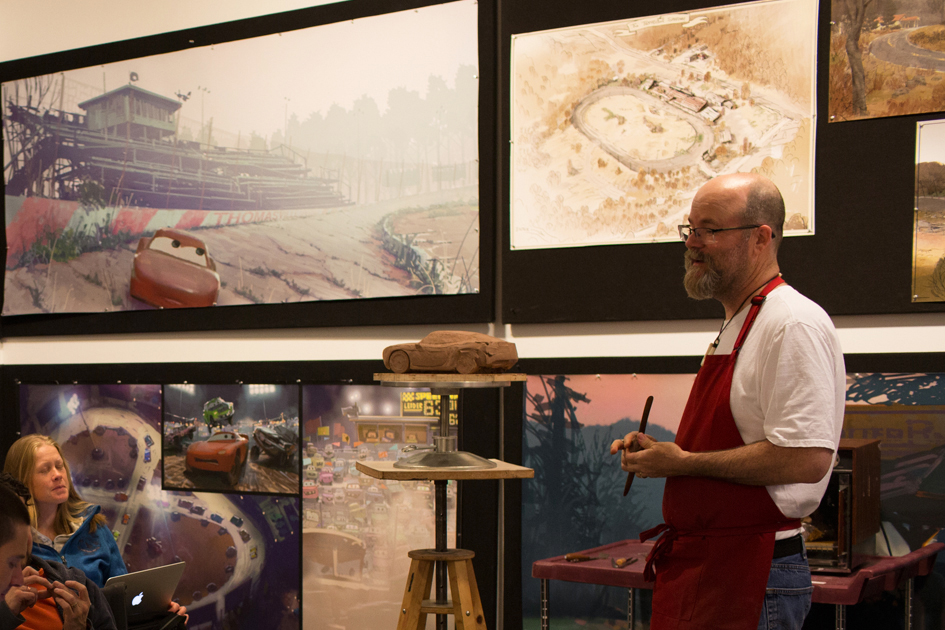 I figured I’d just go through a few cars that I like (slide presentation). This is an early concept drawing of McQueen. We did a bunch of stuff before we did a sculpt that wasn’t quite working out. I think this was the first drawing that led to how McQueen, his end design, I guess.

This was funny too. I included this just because he was all figured out and they wanted to put teeth in, so I had to rip off the front end and install some teeth. They wanted a slight underbite, just to figure out the mouth. Now when we do sculptures for other characters who are organic, human or animal-type characters, the sculpture or the maquette that I produced is more of a document of what they’re actually going to build in the computer. At least that’s what we’re shooting for. With Cars, this was the shooting session after we finished McQueen, we set this up and we started taking pictures of the clay.

Now how Bob used maquette sculpting on Cars 1 was a little different because if you guys know anything drawing cars – front view, side view, top view – are pretty easy to do. Getting those three-quarter angles and those really funky elevations, it’s tough to invent that stuff when it’s so mechanical. Some guys are really good at it like Jay Shuster, but I think Bob needed the structure of this clay to get these overlays. Once he got that angle he liked, he was able to generate a pretty tight drawing off the clay that led to the model packet. That’s what the digital modelers actually use to build the character in the computer. 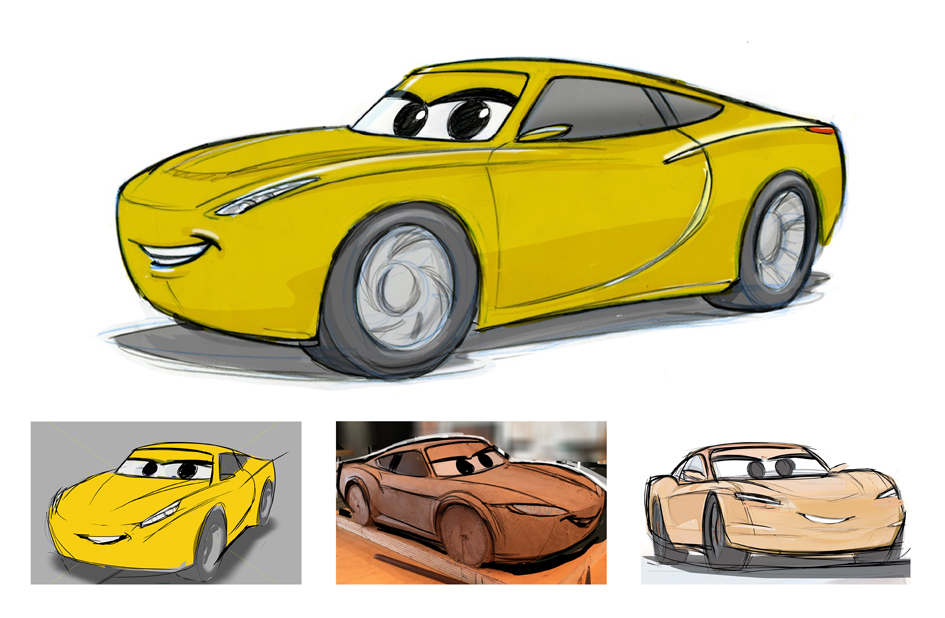 At this time, we didn’t have a tactical team, we didn’t have a bunch of digital modelers early in development, so that’s where I came in. It was a way we could pre-visualize 3D design in a form, because the computer, the digital computer stuff, is a quasi 3D environment, but if you push it out in clay, everyone gets to look at it and there’s no cheating, there’s no lying. Bob was able to actually even start exploring what his … he did color passes, I don’t have any of those. Even how sticker placement, how the graphic design was going to work on this car. Expression.

This is Flo. I started it, I wrapped off the film, I put it in his office and he was messing around with it, and they gave him one day with these. I came back, I forget what I was working on, probably Ratatouille or something, and we had one day to figure out Flo. We pushed and pulled on this thing really fast for a day. We ended up with this really sloppy sculpture, but it’s all Bob needed. When he approved it, I was like, “Are you sure? This doesn’t have a really slick surface at all.” It really was all he needed as a visual structure to draw his model packet. He used the maquettes I produced to figure out what the design was in his own mind. I’m still amazed by the fact that there’s all this clay and there’s junk all over the … It’s not a clean sculpture at all. He was able to even get profiles off of that.

For Cars 2, I was working with Jay Shuster and I threw this in just to give you guys a little insight into my process. I’m sure you know how regular cars are made in Detroit. By the way, this clay is CM-50 Chavant and it was developed, I’m not sure when, for sculpting cars. It’s all I’ve used my whole career, practically. 25 years, I think. I asked that I just get a good side view and a top view. To make my buck I just put in some speed screws, throw some wire around it so if someone tips it, it won’t just slip off the board. That becomes my structural attachment. I pick up a profile that hopefully is as close to what they think the final design is going to be and I just build to the profile.

I do reuse my clay. In that car, there was leftover clay from Jerry’s Game, a Ratatouille test sculpting and that’s Bonnie from Toy Story 3. I think the clay gets better with age. The other sculptor here wants to use new clay only, which is not very green. 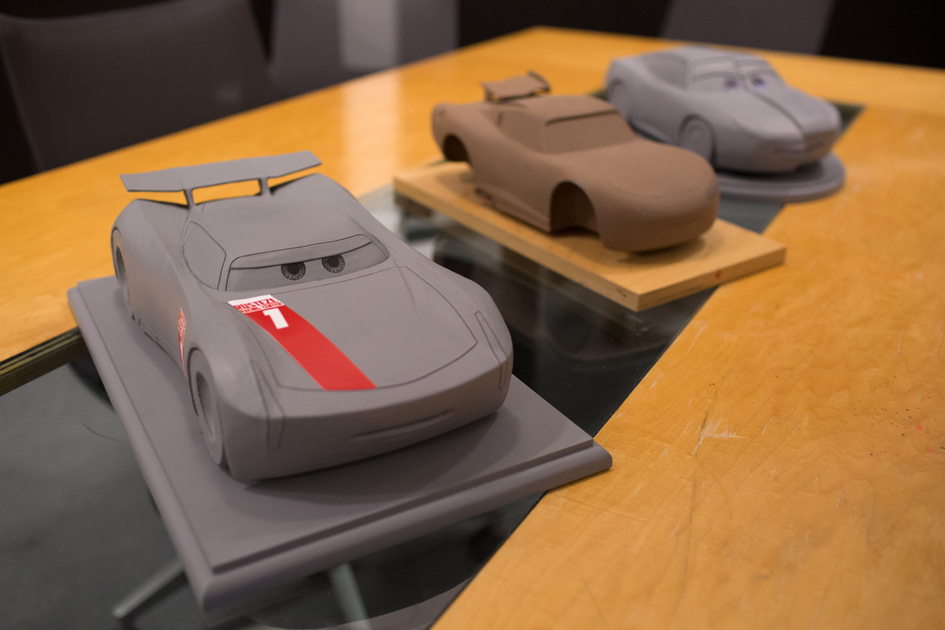 These are the two big squares that Joe Farrer actually sold me and they’ve saved my life, as far as trying to get a profile to stay in place while I’m claying up to it. I used that profile to hit that side view. It keeps me on honest. If I clay right up to it, once I nail it, I sort of leave that line. If you look at Storm, there’s still an indentation on top. This is Jackson Storm, where I was in a hurry and I didn’t fill it in as well as I should, but it’s a document of where that centerline was. Develop it slowly.

These are the two big squares that Joe Farrer actually sold me and they’ve saved my life, as far as trying to get a profile to stay in place while I’m claying up to it. I used that profile to hit that side view. It keeps me on honest. If I clay right up to it, once I nail it, I sort of leave that line. If you look at Storm, there’s still an indentation on top. This is Jackson Storm, where I was in a hurry and I didn’t fill it in as well as I should, but it’s a document of where that centerline was. Develop it slowly.

For me, symmetry is very difficult. That’s the hardest part of doing a car and it freaked me out when I first was asked to sculpt cars, because I’m used to organic sculpture. I’m used to faces, big doughy faces, doughy hands, arms, legs. That’s what I studied in school. I really got into the fact that this had nothing to do with anatomy and it really was more akin to sculpting abstractly or non-objectively. It’s just about pure form and how lines interact.

The hard part was to get expression. I was really freaked out in the beginning, that Luigi taught me that if you get the eyes and the mouth close enough together, you can get these cars to read as characters.

Part two of this article – https://autodesigno.com/pixars-clay-sculptor-shapes-the-world-pt-2/