The normal F-Type is indeed a treat for the eyes, and no slouch in performance. But, it’s hard to leave well enough alone.

Jaguar Land Rover is in Geneva with the Jaguar F-Type SVR for the world premiere of their fastest and most powerful production car of all time. The “fastest cat in the world” is available as a convertible and as a coupe.

More powerful, lighter, and benefiting from an enhanced chassis and driveline and active aerodynamics, the all-wheel drive F-TYPE SVR Coupé and Convertible deliver supercar performance – in all conditions – and unrivalled driver engagement and reward.

“The purity of the F-TYPE’s form is something truly special, but in designing the new F-TYPE SVR we had the opportunity to create something even more dramatic. Every additional form, line or component is there for a reason, and contributes to the car’s increased performance as well as its presence.

“Cutting-edge aerodynamics have always been fundamental to Jaguar design, and everything from the enlarged air intakes to the active rear wing is essential to the new F-TYPE SVR’s dramatic looks and 200mph potential.” – Ian Callum, Director of Design, Jaguar

Raising the output of Jaguar’s supercharged 5.0-litre V8 to 575PS and 700Nm enables the F-TYPE SVR to accelerate from 0-60mph in just 3.5 seconds. Maximum speed of the Coupé model is 200mph, the Convertible 195mph.

The F-TYPE R is already a benchmark in the sports car segment but this model represented the starting point for development of the F-TYPE SVR. Everything which contributes to performance and vehicle dynamics has been meticulously re-evaluated, re-engineered and optimised still further.

By exploiting the fundamental capability engineered in to the F-TYPE from day one, Jaguar Land Rover’s Special Vehicle Operations division has developed Jaguar’s fastest and most powerful series production road car.

“Our objective was to take everything that our customers love about F-TYPE – the performance, the handling, the sound, the design – and take it to a whole new level. This is what the new F-TYPE SVR delivers: it’s a 200mph all-weather supercar.

“With 575PS, less weight, an uprated chassis and bespoke calibrations for the transmission and all-wheel drive system, performance is even more accessible and exploitable. This is a car that SVO has developed for true enthusiasts but it’s one that can be enjoyed every day.” – John Edwards, Managing Director, Jaguar Land Rover Special Operations 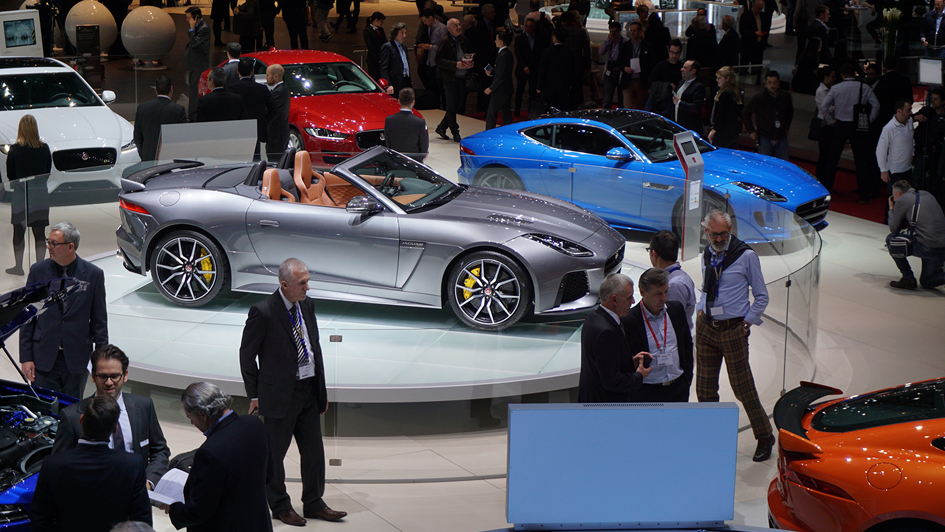 The F-TYPE SVR is Jaguar’s fastest and most powerful series production road car but optimising everything from the calibration of all-wheel drive system to the valving in the dampers and the width of the tyres ensures that it remains a tractable, useable day-to-day sports car

The F-TYPE SVR features the latest evolution of Jaguar’s 5.0-litre supercharged V8 to deliver the ultimate in performance and driver reward. Changes to the engine’s calibration – adopted from the F-TYPE Project 7 – deliver power and torque ratings of 575PS and 700Nm.

The new system also delivers an even more distinctive, purposeful, harder-edged exhaust note, especially once the active valves in the rear silencers open – this happens at lower engine speeds to enhance the F-TYPE SVR’s performance character still further. Even the valves themselves are made from titanium because this is the ultimate lightweight solution. The four round tailpipes are distinguished by discreet SVR branding.

To make the most of the increased engine output, the eight-speed Quickshift transmission gains a new calibration. Together with the extra grip delivered by the wider, 265- and 305-section front and rear tyres (10mm wider than the F-TYPE R), and optimising the torque on-demand all-wheel drive system’s Intelligent Driveline Dynamics (IDD) control technology, this delivers the F-TYPE SVR’s outstanding launch behaviour and immediacy of response.

The changes to IDD and refinements to the rear electronic active differential (EAD) ensure optimum torque distribution between the front and rear axles and across the rear axle. Combined with a unique calibration for the Dynamic Stability Control (DSC) system, this enhances traction and dynamics – on all surfaces and in all weathers – while preserving the F-TYPE SVR’s rear-wheel drive character and handling balance.

Selecting Dynamic mode will enable the enthusiast driver to fully explore the F-TYPE SVR’s capability, especially with the DSC system set to TracDSC or switched off completely. Under these conditions, IDD will use the most extreme calibrations for the AWD system and for the EAD to fully exploit the available grip.

The gains in performance and driveability do not come at the expense of fuel consumption and CO2 emissions: compared to the F-TYPE R, the figures on the European combined cycle remain unchanged at 25mpg and 269g/km respectively.

The enhancements made to the powertrain and driveline are matched by the modifications made to the chassis. Designed to take the SVR’s dynamic capability to the next level, and deliver ultimate chassis agility, precision, control and response, the changes nevertheless preserve the F-TYPE’s ride quality and inherent duality of character – day-to-day usability and comfort have not been compromised.

That the vehicle is 25kg lighter as standard than the AWD F-TYPE R – and 50kg lighter with options including the Carbon Ceramic Matrix brake system and carbon fibre roof – brings immediate benefits in terms of handling. Optimised aerodynamics produce further gains: the rear wing delivers reductions in lift whether in the raised or lowered position.

These fundamental improvements are matched by a raft of other hardware and software changes designed to extract the full potential from every part of the chassis. The rear anti-roll bar is thicker. The valves inside the continuously-variable dampers have been revised and the control software – the heart of Jaguar’s Adaptive Dynamics system – has been recalibrated. The overall effect is that both low speed comfort and high speed control are improved.

The rear knuckle is completely new. Now an intricate, weight-optimised aluminium die casting, the design of the part enables a 37 per cent increase in camber stiffness and a 41 per cent increase in toe stiffness, which translates into greater control of the tyre contact patch and an even more connected steering feel. 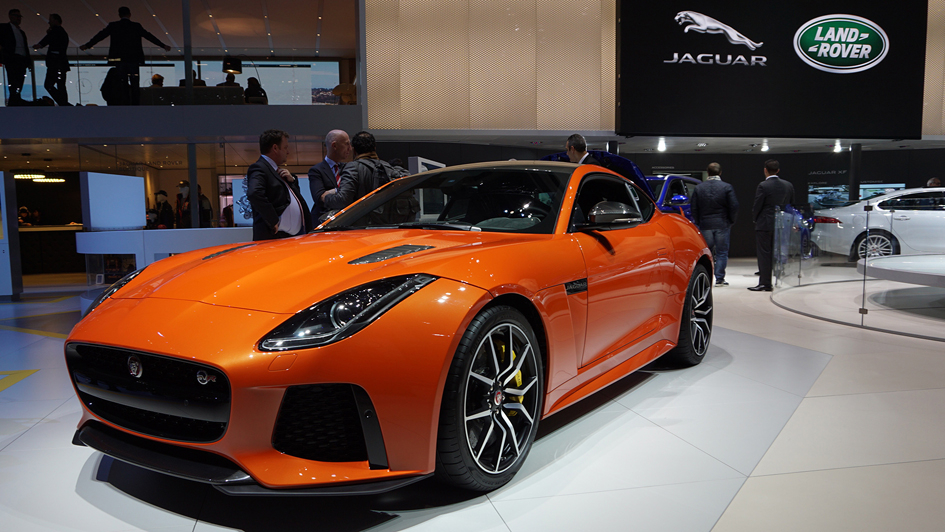 The world premiere of the Jaguar F-Type SVR, shown here as a convertible, at the Geneva Motor Show 2016. Image: Jaguar / http://autovideoreview.com

The front anti-roll bar diameter has been reduced slightly. Together with the revised damper control software, a unique tune for the Torque Vectoring system which enables even more precise control of the braking applied to the inner wheels, the changes mitigate understeer – even at high corner entry speeds.

The wider, specially-developed 265/35/ZR20 and 305/30/ZR20 tyres provide exceptional levels of grip with no detriment to ride quality or refinement. The range of 9J and 11J forged aluminium wheels deliver savings of up to 13.8kg per vehicle – another weight reduction which beat the development target – and the open spoke design also improves brake cooling. Exclusive to the F-TYPE SVR, the range comprises Coriolis wheels in Satin Technical Grey or Gloss Black, and – for models fitted with the CCM braking system – Maelstrom wheels with a Satin Black polished finish.

The F-TYPE’s EPAS system already sets the benchmark for feel and response – especially off-centre. Further tuning of the control software delivers even better feedback and, combined with the stiffer rear knuckle assembly, the new wheels and tyres and the revised damper settings, means that the F-TYPE SVR steers with even greater immediacy and precision.

The effort made in developing the chassis was matched by the work done on the F-TYPE SVR’s aerodynamics. Asked to solve the often conflicting requirements of reducing drag and reducing lift, the SVO team designed a full suite of features which work together to improve dynamics, stability, performance and efficiency.

To cut drag, the front bumper was extended outboard to mask as much of the wheels as possible. This also helps the airflow to remain attached to the sides of the car, reducing drag still further.

The front valance and front undertray also contribute to drag reduction but do much more to improve engine cooling. The louvre design of the new bonnet vents uses the flow of air over the bonnet to extract more hot air from the engine compartment.

Apertures in the wheelarch liners help the high pressure air to escape through the fender vents, helping to reduce front-end lift.

An under-floor tray beneath the rear suspension accelerates the airflow, reducing pressure and therefore reducing lift. Aerodynamics are further enhanced by the rear venturi. Integrating this feature was only possible because of the design of the lightweight titanium and Inconel exhaust system: using two individual rear silencers instead of a single transverse silencer enabled the venturi to be neatly packaged between them.

But the single most effective device developed for the F-TYPE SVR is its deployable rear wing: the highly optimised design is more effective and more aerodynamically-efficient in both raised and lowered and positions.

With the car in Normal mode, the wing deploys once vehicle speed reaches 60mph and 70mph for the Convertible and Coupé respectively. The wing will also deploy automatically whenever the driver selects Dynamic mode. In this raised position, the wing, together with the other aerodynamic enhancements, enables a reduction in the F-TYPE SVR’s drag and lift coefficients of 2.5 per cent and 15 per cent respectively compared to the F-TYPE R with spoiler deployed. When the SVR’s wing is in the lowered position, the corresponding improvements are 7.5 per cent and 45 per cent. 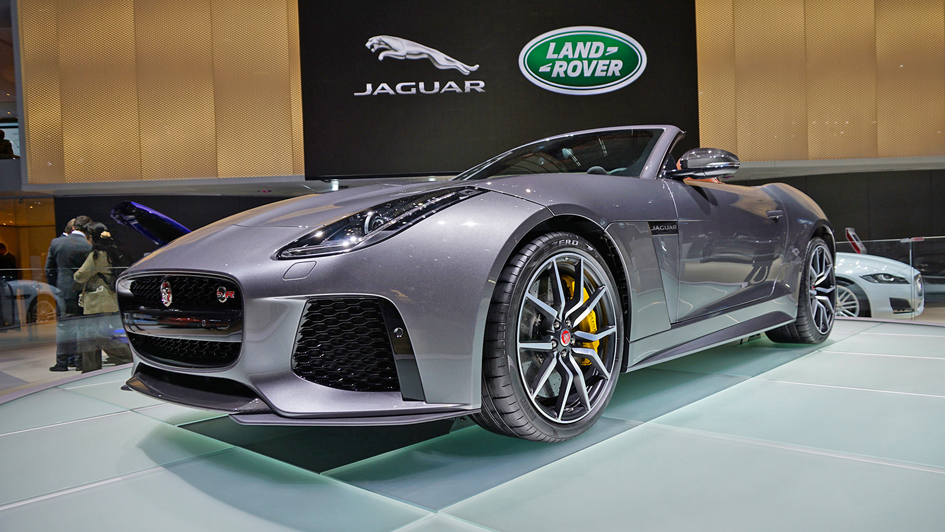 The world premiere of the Jaguar F-Type SVR, shown here as a convertible, at the Geneva Motor Show 2016. Image: Jaguar / http://autovideoreview.com

The F-TYPE SVR’s performance does not come at the expense of comfort. The cabin gains cosseting 14-way SVR Performance seats finished in Jet black leather with a distinctive Lozenge Quilt pattern, contrast stitching and micro-piping and headrests embossed with the SVR logo. Customers also have the option of Siena Tan or Red leather.

The SVR Jet black leather and optional Jet black leather and suedecloth steering wheels feature black painted spoke outers and contrast stitching in a range of four colours. The unique anodised aluminium shift paddles are larger than those in other F-TYPE models to make changing gear even more instinctive.

The driver-focused theme of the ‘one-plus-one’ layout is enhanced with a suedecloth covering for the instrument cluster and centre console. Customers who select the optional Siena Tan or Red leather interiors benefit from full leather wrapping of the instrument panel.

Partnering the InControl Remote app for iOS smartphones is a companion app developed for the Apple Watch. Using this device, drivers can lock and unlock the doors, check key information such as fuel level or mileage, and locate the car on a map. InControl Remote even enables the driver to start the engine and set the climate control system temperature to pre-condition the cabin before the start of a journey. Nothing could be simpler.