INGOLSTADT, October 3, 2022 – Twelve years after the premiere of the first Audi R8 GT, Audi Sport GmbH is launching the second edition of this exclusive super sports car: the new Audi R8 Coupe V10 GT RWD. The 5.2 liter, naturally aspirated V10 engine’s output has increased to 602 horsepower making it the most powerful rear-wheel drive unit in the history of the brand. A new 7-speed dual-clutch transmission for faster shifts and the new Torque Rear driving mode allows drivers to choose their own level of ESC support. This enables controlled and simultaneously precise oversteering. The seven-stage torque rear can be adjusted via the control knob on the steering wheel. The new R8 GT is limited to 333 units worldwide. New and exclusive exterior and interior features pay homage to the first generation of the R8 GT. These include, for example, sequential numbering, special light alloy wheels, and an interior in a combination of black and red. The new Audi R8 GT will be available at dealerships starting in 2023. U.S. – specific details, volume, and pricing to follow at a later date. 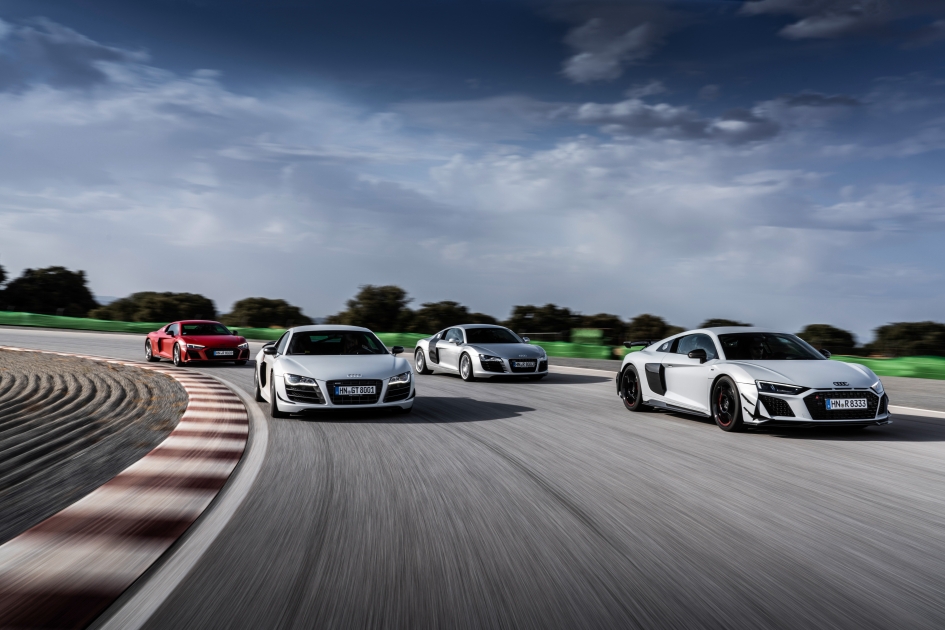 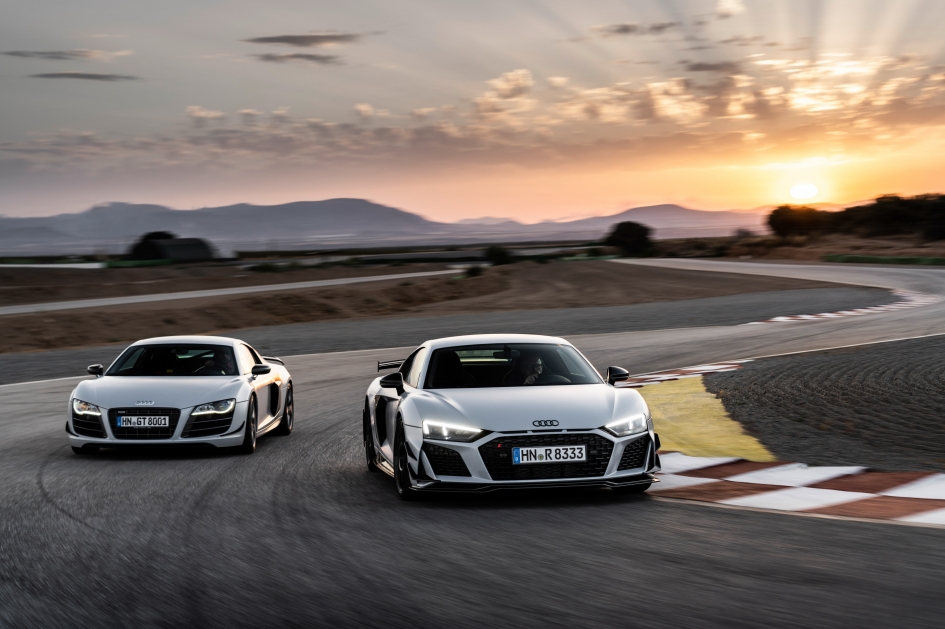 Another decisive difference: a new 7-speed dual-clutch transmission with even faster shift times. Thanks to an altered gear ratio and the associated higher speed, the new gearbox allows even more impressive acceleration in all gears. Apart from that, there is an exclusive design feature for the R8 GT only: the intake manifold is painted in black. 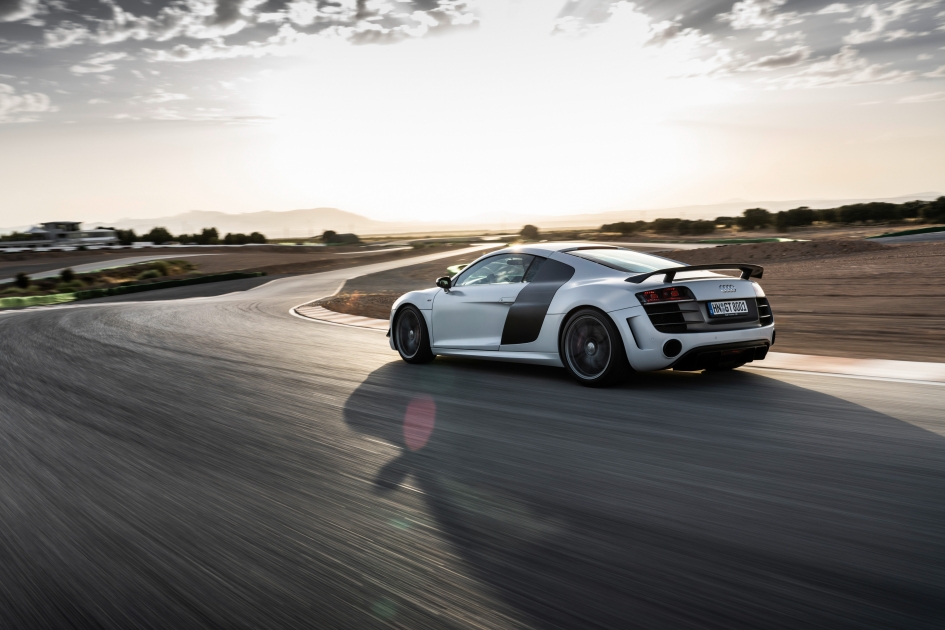 New Torque Rear Drive Mode
For the first time, Audi Sport GmbH, which manufactures the new R8 GT* largely by hand at Böllinger Höfe, is offering Torque Rear mode. Slippage is controlled on the rear axle by the traction control system (ASR), which is part of the ESC. Seven characteristic curves are stored in the ASR, offering different levels of support. Level 1 allows little slippage, while level 7 allows a lot of slippage. The desired torque rear level can be set by turning the control knob on the steering wheel. This function also enables a different adaptation as driving skills and road conditions develop on a track. Depending on this progression and also taking into account information from wheel speed sensors, steering angle, accelerator pedal position, and the selected gear – the engine control unit measures engine power on the rear axle. 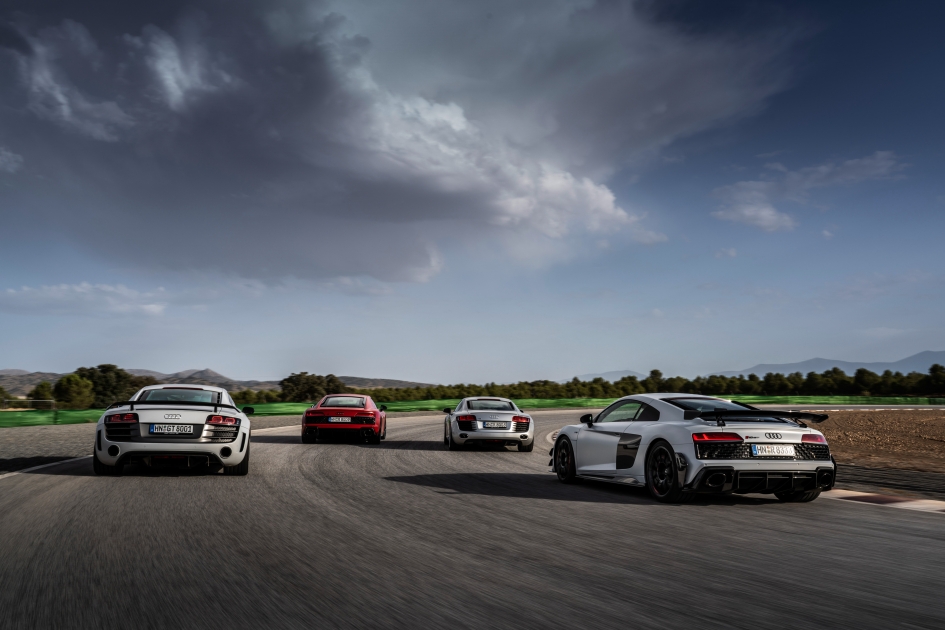 Less Is More
Compared with the R8 Coupé V10 performance RWD*, various measures resulted in a weight reduction of around 20 kilograms (44 lb.) to a total of 1570 kilograms (3,461 lb.) (without driver). The exclusive 20 inch, 10-spoke wheels, are combined with high-performance Michelin Sport Cup 2 tires, designed for road and racetrack use, play a key role in reducing weight. The lightweight forged wheels are based on Audi’s motorsport vehicles. The extremely powerful ceramic braking system, which is standard equipment in the R8 GT*, saves additional weight. In addition, there are R8 bucket seats and the performance sports suspension with the CFRP anti-roll bar. The front anti-roll bar is made from carbon fiber reinforced plastic. Together with the two coupling rod connections made of red anodized aluminum, which reduces weight and increases road-holding and cornering dynamics. 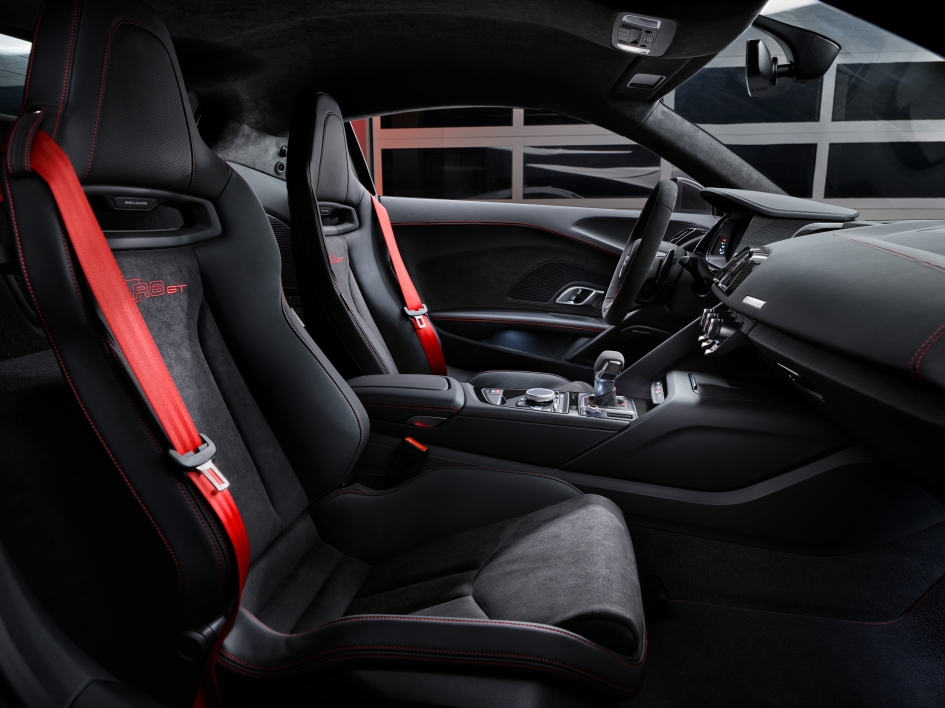 A Look to Fit Its Status
To differentiate the new Audi R8 GT from its relatives, the special model is equipped with exclusive add-on parts. The first distinguishing feature is the black ‘R8 GT’ lettering on the rear. All other emblems are in black. With the Carbon Aerokit in high gloss, which was developed in the wind tunnel, the package generates better stability on the road, and therefore also faster cornering speeds. In total, the Carbon Aerokit consists of the following attachments: front splitter, flics, side skirt covers, cW-elements on the sides of the rear bumper, a diffuser, and a rear wing with gooseneck suspension. This insert ensures optimum wing underflow and thus improves aerodynamic efficiency. 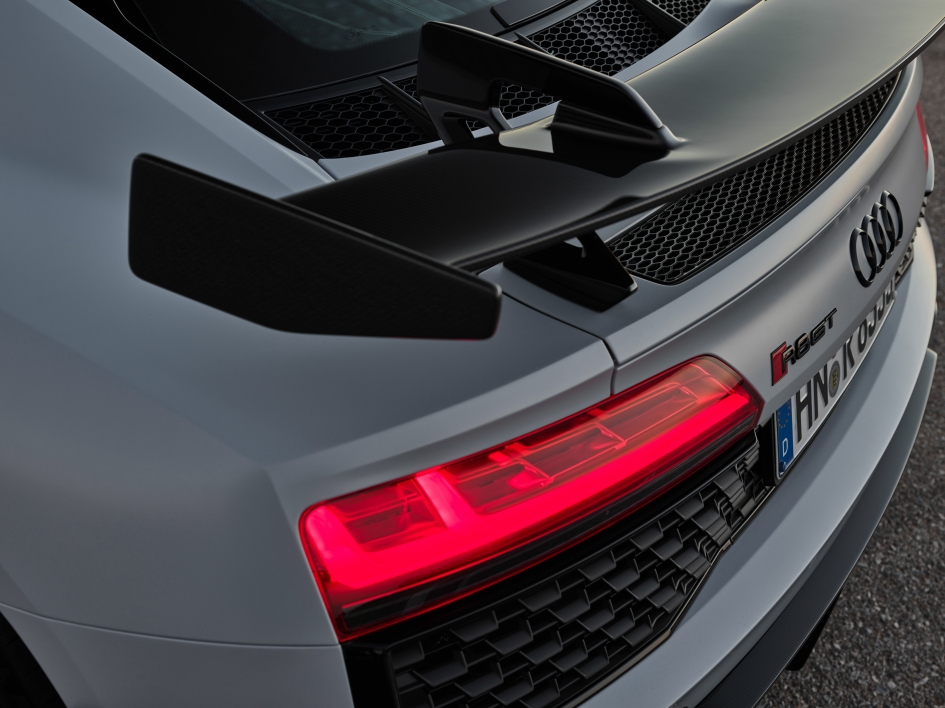 In the interiors, Audi Sport GmbH continues its homage to the first R8 GT from 2010. The interior is crafted in a combination of black and red. This includes red belts – only available in the R8 GT from 12 years ago. The floor mats and the R8 bucket seats feature the lettering of the special model in black and red. One highlight: Customers can find the sequential numbering of their R8 GT in the middle of the center console next to the gear selector lever, partially matted in the carbon inlay.