Gordon Murray Automotive, sister-business of visionary vehicle design and engineering company Gordon Murray Design, has announced details of its first vehicle – the T.50 supercar. Conceived as the spiritual successor to the Murray-devised McLaren F1, the T.50 will be the purest, lightest, most driver-focused supercar ever built.

The development of T.50 is at an advanced stage, with full production and customer deliveries set to commence in early 2022. Just 100 owners of the T.50 will experience Murray’s vision – a supercar inspired by his 50 years at the pinnacle of Formula One and automotive industry engineering and design.

Professor Gordon Murray CBE, Chairman of Gordon Murray Group, said:“An unflinching dedication to lightweighting, highly-advanced active aerodynamics and world-leading standards of advanced engineering will ensure the T.50 rewrites the supercar rulebook. Our experienced team is applying the same uncompromising approach to design and engineering that shaped every facet of the F1, and they are able to deliver substantial improvements over that car in every meaningful way.”

The engineering planning, plus all interior and exterior styling of the new vehicle has been carried out by Gordon Murray Design. It will be manufactured in the UK by Gordon Murray Automotive – a new company first announced in late 2017 at the One Formulaexhibition. The event celebrated 50 years of Murray’s career in motorsport and automotive design and engineering, plus it previewed plans to build a limited-run supercar – the T.50. Every race or road car penned by Murray so far has featured a ‘T’ designation; and the T.50 will be the 50thin a highly illustrious line.

It will be powered by a compact and light, naturally-aspirated, all-new V12 engine. The unit will be capable of an extraordinary 12,100rpm – unparalleled in a V12 road car – and 650hp to deliver unmatched power-to-weight. However, Murray says: “I have absolutely no interest in chasing records for top speed or acceleration. Our focus is instead on delivering the purest, most rewarding driving experience of any supercar ever built – but, rest assured, it will be quick.” 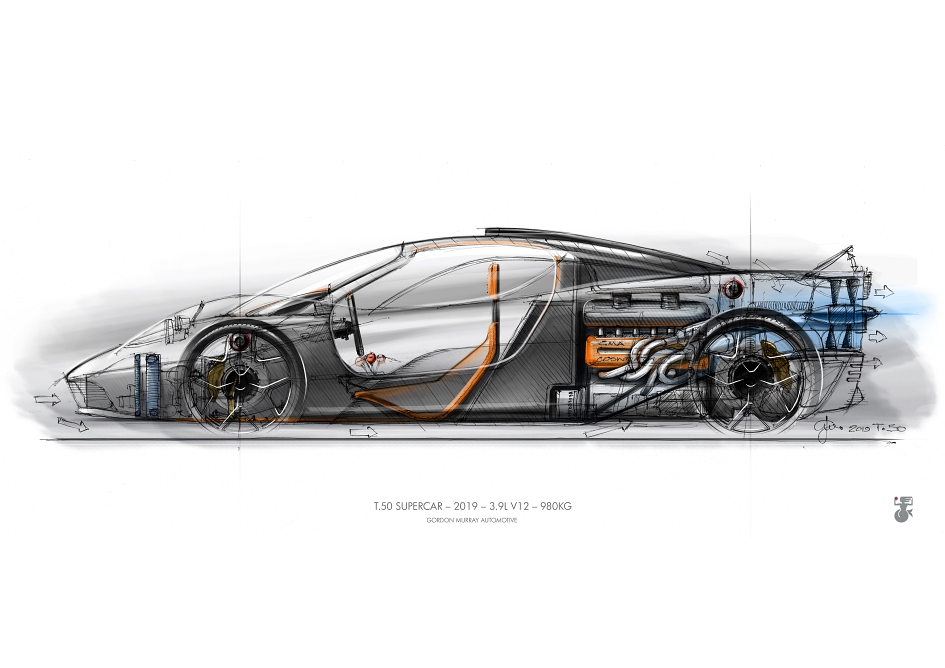 The T.50 adopts the same, iconic three-seat format that Murray pioneered for the F1

The T.50 adopts the same, iconic three-seat format that Murray pioneered for the F1, with the driver benefitting from a central ‘jet-fighter-style’ driving position. The new car builds on the F1’s highly-advanced aerodynamics, taking Murray’s ground-effect innovations to an all-new level with intelligent management of underbody airflow coupled with a 400mm fan at the rear. The fan actively controls underbody airflow – a feature Murray famously premiered on the Brabham BT46B Formula One ‘Fan Car’. This approach allows the upper surfaces of the car to retain purity and beauty, eschewing the exaggerated scoops and spoilers familiar in the segment and equipping the T.50 with the most advanced aerodynamics of any road car

All engineering, design and styling of the T.50 is by Gordon Murray Design and the car will be manufactured by Gordon Murray Automotive at a new, purpose-built facility in Surrey, UK. Furthermore, all major components will be bespoke and UK-sourced, including the powertrain, body and chassis. This will be a true British supercar.

The T.50, by Gordon Murray Automotive will be priced in excess of £2 million before taxes.

“Automotive enthusiasts and road-test editors have discussed the concept of ‘peak supercar’ for some time,” says Murray. “The reality of chasing top speeds only adds weight, notably through ever-more powerful engines, which increase the requirement for larger, heavier ancillaries. We are taking a very different approach.”

Ingrained in the approach of the Gordon Murray Automotive product development strategy is a fastidious commitment to minimise weight – in everycomponent. “This is the key to achieving enhanced performance and dynamics, and refocusing the supercar on the driver and the thrill of driving. We’re not interested in simply chasing numbers, and never will be,” asserts Murray.

Gordon Murray Automotive will produce the world’s lightest, most driver-focused supercar through sophisticated use of advanced carbon fibre engineering and this fanatical dedication to purging the vehicle of every unproductive gram.

The T.50 supercar will weigh just 980kg – around a third lighter than the average supercar – making it, by far, the lightest supercar ever.

With a clear driver-focus, the external proportions are highly compact (smaller than the footprint of a Porsche 911 at just 4,380mm long and 1,850mm wide) to optimise handling, while the interior is nonetheless spacious and comfortable for three, with ample dedicated space for luggage.

The most advanced aerodynamics of any road car

In rewriting the supercar rulebook, Gordon Murray Automotive set out to equip the T.50 supercar with the most advanced aerodynamics of any road car. The new model will feature intelligent under-body active aerodynamics, which employs continuous, dynamic and interactive underbody ground-effect systems to optimise the driving experience.

Uniquely, the supercar will feature a 400mm ground-effect fan, similar to that on Murray’s famous Brabham BT46B Formula One ‘Fan Car’. The Gordon Murray Automotive team has established a new technical partnership with a Formula One team, which will make its rolling-road wind tunnel available to develop the aerodynamics of the T.50.

With all of the car’s intelligent aerodynamic sophistication housed beneath the car, the upper surfaces are free from unsightly wings, outlets, vents and bulges, safeguarding the purity and beauty of the exterior design. The sense of drama, even when stationary, is amplified by the striking dihedral doors that hark back to the F1 – where they first appeared on a supercar.

An engineering work of art with bespoke powertrain and running gear

Through exquisite engineering, every part of the T.50 is refined to create the purest, most focused supercar ever made – “We expect this to be the last, and the greatest, ‘analogue’ supercar ever built,” says Murray.

The T.50 features a bespoke, mid-mounted, all-new V12 engine that has been designed, developed and built exclusively for Gordon Murray Automotive by Cosworth Powertrain.

The V12 3.9-litre ‘Cosworth Gordon Murray Automotive’ engine will rev to an unparalleled 12,100rpm and develops 650hp and 450Nm torque. Paired with the car’s extraordinary lightness (980kg), it achieves a power-to-weight of 663hp/ton exceeding that of any other naturally-aspirated sports car designed for the road.

The V12 Cosworth GMA engine delivers more power from four litres than the F1 produced with 6.1 litres in 1992, an achievement aided by the inclusion of roof-fed ram-air induction, which increases horsepower to around 700hp.

Cosworth Managing Director, Powertrain, Bruce Wood, said: “We are tremendously excited to be part of the T.50 supercar project, and to have the opportunity to work alongside Gordon Murray Automotive. It is a real privilege to play such a key role in the T.50 with an all-new V12 3.9-litre engine, designed, developed, manufactured and assembled by Cosworth’s industry-leading powertrain division. 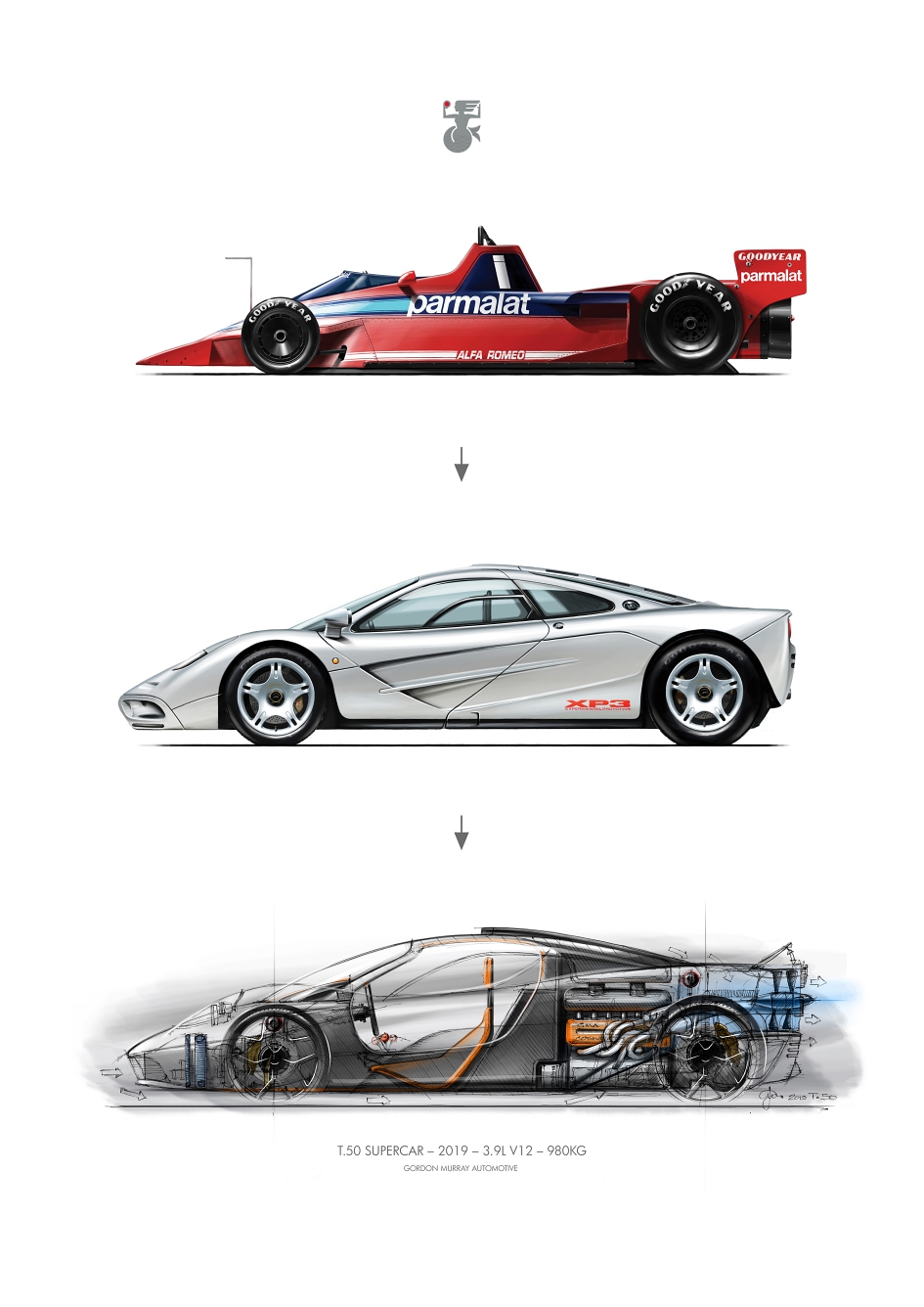 “We have created the greatest naturally-aspirated engine ever designed for the road.” – Gordon Murray

“Developing an engine that delivers superlative performance, while meeting stringent emissions targets, is a challenge that demonstrates Cosworth’s unique capabilities. To be so intrinsically aligned with a supercar that puts engine performance, response and light weighting at the very heart of the driving experience is the ultimate accolade and underscores Cosworth’s reputation and capabilities as a leading OEM tier one powertrain partner.”

The Gordon Murray Automotive team was focused on producing the purest driving experience so rejected the use of turbos or electrified powertrain assistance, instead applying attention to engine response.

Murray adds: “By working with the team at Cosworth Powertrain we have created the greatest naturally-aspirated engine ever designed for the road. It is the highest revving, highest power density, lightest and fastest-responding naturally-aspirated V12 ever made for a road car.”

Power is transferred to the rear wheels via a bespoke, lightweight six-speed transmission designed in conjunction with British transmission technology specialists Xtrac. In the furtherance of maximum driver reward and low weight, Murray has specified the T.50 with a newly-designed and developed ‘H-pattern’ six-speed gearbox – deliberately eschewing the twin-clutch solution favoured by many supercar makers. The brakes, also developed specially for the T.50, shed speed through a combination of lightweight monobloc alloy calipers and new technology carbon-ceramic discs.

Applying the same driver-focused engineering principles that shaped the F1

The T.50 supercar is the spiritual successor to the ground-breaking F1, and is being developed with the same unwavering focus on engineering purity and quality.

“Just as with the F1, we have no specific targets for acceleration, top speed or lap times,” explains Murray. “The F1 was fast because it was light and relatively small. The T.50 will deliver performance and dynamic characteristics simply out of reach for other supercars not least because of its low weight. Once again, I have focused on the complete driving experience, not horsepower or top speed.” 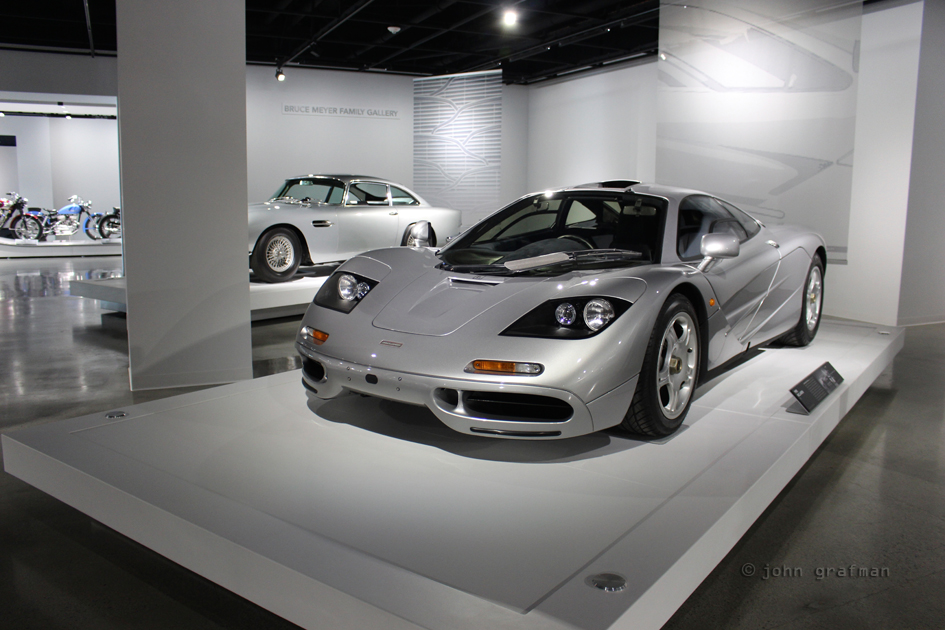 The central driving position provides a perfect ‘jet-fighter-style’ visibility, while analogue instruments and driver-centric controls are positioned to provide an even more intuitive and immersive driving experience than the acclaimed F1.

Armed with the same mid-engined, rear-wheel-drive set-up, the new T.50 supercar has perfect weight distribution and will boast incomparable vehicle dynamics and driver feel. Despite the car’s performance capabilities, it is far from a stripped-back racer. The T.50 is an ‘everyday supercar’ capable of GT-style cruising in spacious comfort with room for driver, two passengers and luggage.

“I designed the F1 as a sort of super GT car – absolutely road-focused with no plan to go racing, which is why the car set new standards for packaging and luggage space. The T.50 design has the same focus and betters the F1 in every area – ingress and egress; luggage capacity; serviceability; maintenance and suspension set-up. Also, driver-selectable engine maps ensure a driving mode to suit every situation,” concludes Murray.

Positioned as a sister company to Gordon Murray Design, Gordon Murray Automotive forms part of a new corporate organisation for the engineering group.

Headquartered in Surrey, UK, Gordon Murray Design is a visionary design and engineering company . It was established in 2007 with a focus on developing an innovative and disruptive manufacturing technology trademarked iStream, and has since built a global reputation as one of the finest automotive design teams in the world.

The company’s unique approach and truly creative thinking enables Gordon Murray Design to deliver complete car programmes in a highly efficient and innovative way from concept and design, through to prototype and development for production.