Alongside the SVJ 63 Roadster, Lamborghini pays tribute to its endurance motorsport victories with the unveil of the Huracán EVO GT Celebration. Lamborghini’s limited series of 36 units pays tribute to the dual victories of 2018 and 2019 at the 24 Hours of Daytona and the 12 Hours of Sebring ‒ 36 being the sum time of the two famous endurance races, also known as the “36 Hours of Florida”.

With the Aventador SVJ 63 Roadster Lamborghini’s Centro Stile design team and Ad Personam department have drawn on the virtually limitless color and trim options available through Lamborghini’s personalization program, with the collaboration creating eight exclusive new design expressions. Available to just 63 owners worldwide, each of the eight unique combinations comprises an exotic exterior and interior, unique to the Roadster version of the SVJ 63. 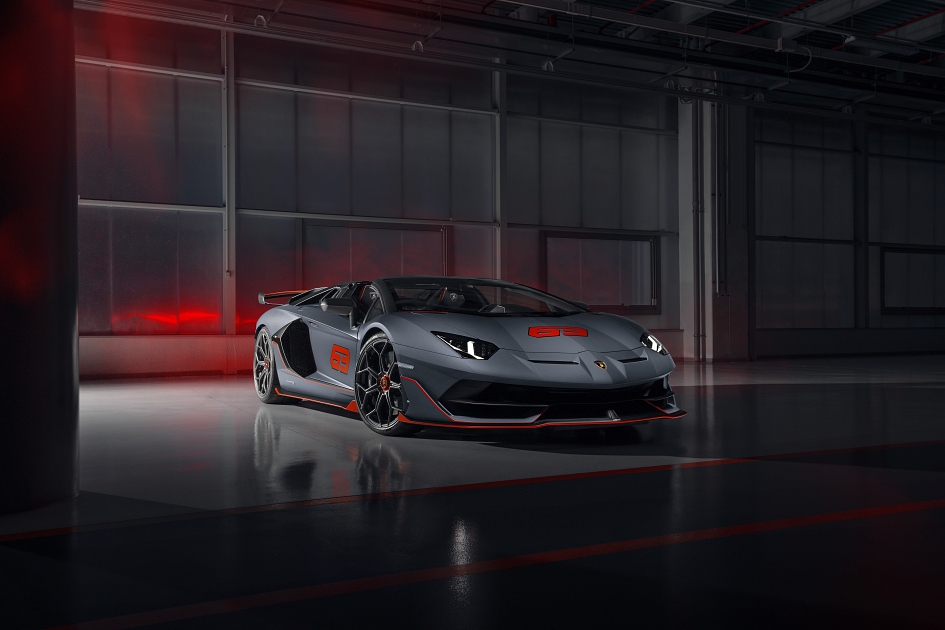 The exterior styling is specifically developed for the Roadster model, with a matt or shiny carbon fiber upper part that includes roof, engine cover, engine air vents, windscreen rim and wing mirrors. A new matt titanium finish features on the Leirion forged rims and the car carries the SVJ 63 livery, as well as a ‘1 of 63’ numbered plate.

Inside, three color schemes in Alcantara, featuring carbon fiber elements throughout the cockpit, are complemented by Lamborghini’s patented lightweight CarbonSkin. A badge on the steering wheel endorses the car as one of a limited edition, as does a ‘63’ logo on the rear wall in Alcantara and CarbonSkin.

The car is shown on the concept lawn in Pebble Beach in a matt grey Grigio Acheso, set off by the dominance of the visible carbon fiber exterior elements. Details in orange Arancio Dac include SVJ and ‘63’ logos, with the matt titanium rims featuring an Arancio central locking plate. 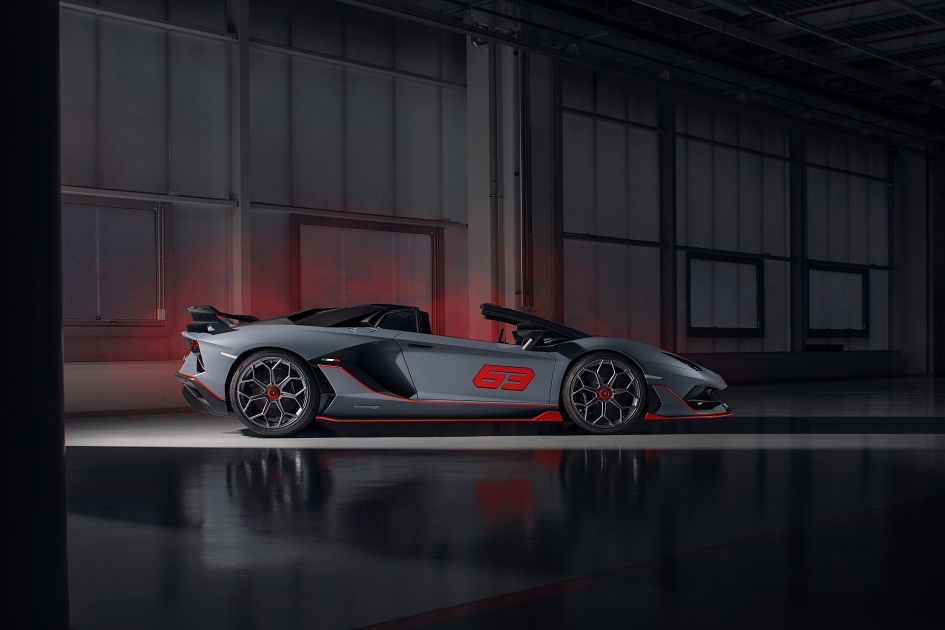 Inside, tri-tone Alcantara upholstery in Grigio Octans (grey), Grigio Cronus (grey) and Arancio Dryope (orange) is combined with carbon fiber and CarbonSkin. The carbon fiber sports seats are finished with white Q-Citura cross stitching while the ‘63’ logo behind the seats in carbon fiber and lasered Alcantara reminds the occupants of the exclusivity of this SVJ Roadster.

The Aventador SVJ Roadster upholds the exceptional performance, handling and aerodynamic superiority of the SVJ coupé. Sporting the ‘Super Veloce’ for superfast and ‘Jota’ suffix signifying the car’s performance and track prowess, its coupé stablemate took the Nürburgring- Nordschleife production car record. Outputting 770 CV (566 kW) at maximum 8,500 rpm, the SVJ delivers 720 Nm of torque at 6,750 rpm, with a weight-to-power ratio of 2.05 kg/CV. The SVJ Roadster accelerates from standing to 100 km/h in 2.9 seconds and from 0 to 200 km/h in 8.8 seconds. A top speed of more than 350 km/h is complemented by a braking distance of 100 km/h to 0 in 31 meters.

The Aventador SVJ Roadster’s 63 units are already sold to collectors worldwide, with delivery from 2020 onwards.

The Huracán EVO GT Celebration is a tribute to the Huracán GT3 EVO, which triumphed at the 24 Hours of Daytona and the 12 Hours of Sebring for two consecutive seasons. The design evokes the livery of the GRT Grasser Racing Team, which along with Paul Miller Racing brought Lamborghini the four victories, characterized by the combination of Verde Egeria green and Arancio Aten orange. Three body colors have been created by Lamborghini Ad Personam in collaboration with the Centro Stile, with which three other colors can be combined for the livery, for a total of nine combinations. 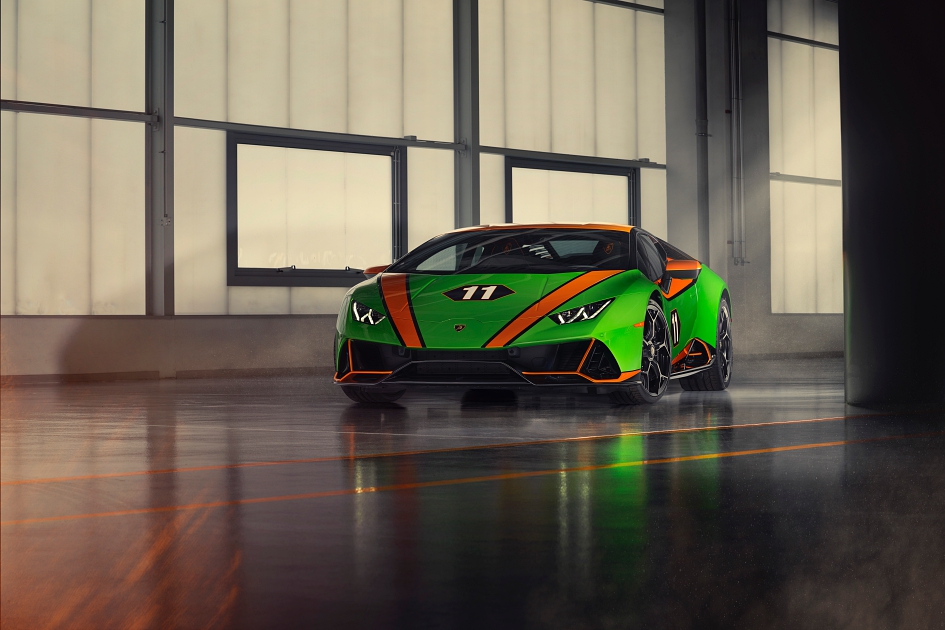 The car’s racing look is underscored by both the hexagons on the doors and front hood that frame the number “11”, inspired by the number plates for racing cars, and by the 20” single-nut wheels that can be combined with colored brake calipers.

On request, the body can be personalized with the Lamborghini Squadra Corse shield, applied on the roof and framed by the Italian and U.S. flags, and laurel wreaths placed on the rear fender. In addition, the side members are decorated with identification plates “Daytona 24” and “Sebring 12”; the driver’s side B-Pillar features a carbon fiber plate with the inscription “1 of 36”. 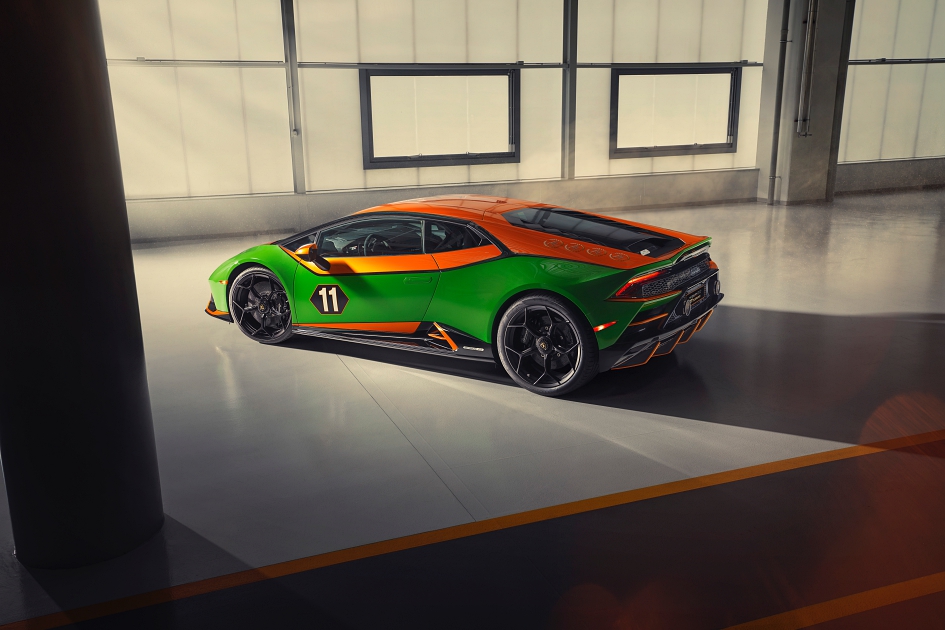 The interior features other exclusive details: upholstery in Alcantara with contrasting stitching in the same color as the livery; and the hexagonal plate with shield, flags and laurel, situated between the new racing seats, making their debut on the Huracán EVO GT Celebration. This limited edition of the Lamborghini coupé, powered by the same aspirated V10 engine used in the racing car, is only available for the North American market, and the first deliveries are planned for early 2020. 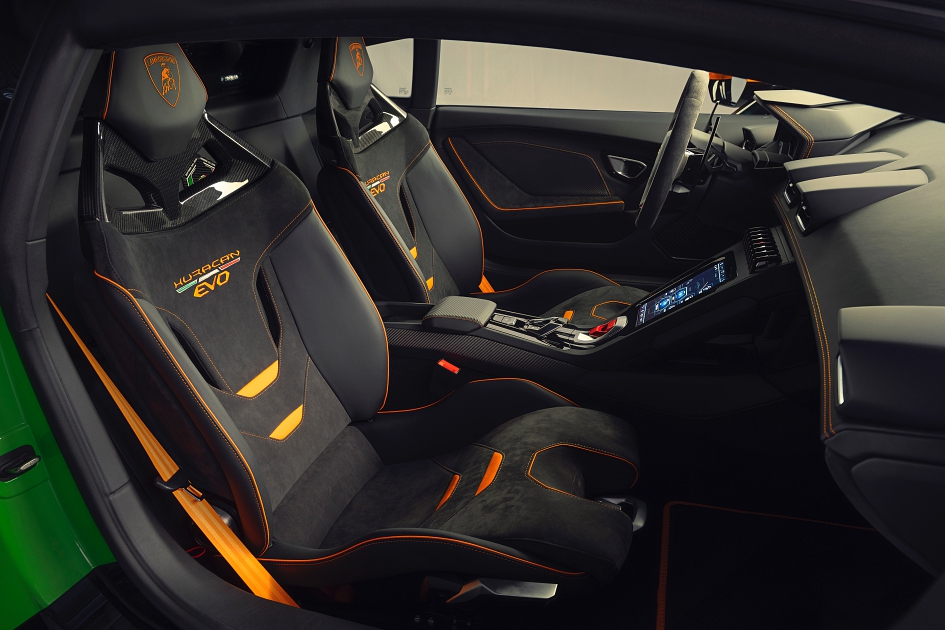 Furthermore, at The Quail for the first time, the Urus is shown in one of the many new colors available soon, a typical Lamborghini orange color, Arancio Borealis, a four-layer paint emphasizing the depth of the color, realized in the new paint shop in Sant’Agata Bolognese.

Find out more at Lamborghini