Intro to the 2017 ACURA NSX, the Speculation Ends

Home/News/Intro to the 2017 ACURA NSX, the Speculation Ends

Intro to the 2017 ACURA NSX, the Speculation Ends

When the original Acura NSX made its debut 25 years ago, it forever changed the supercar universe by combining scintillating sports car styling and athletic performance—common traits long associated with the exotic car segment—with a new dimension of quality, exceptional ergonomics, comfort, and dynamic poise. The NSX introduced and defined Acura’s approach to “Precision Crafted Performance” with its cutting-edge design and innovative technology that provided accessible supercar performance for real drivers in the real world.

The overarching concept for the design and development of this next-generation NSX was the idea of a “human-centered supercar,” one that places the driver at the center of its mission in each and every element of its design and dynamic performance. 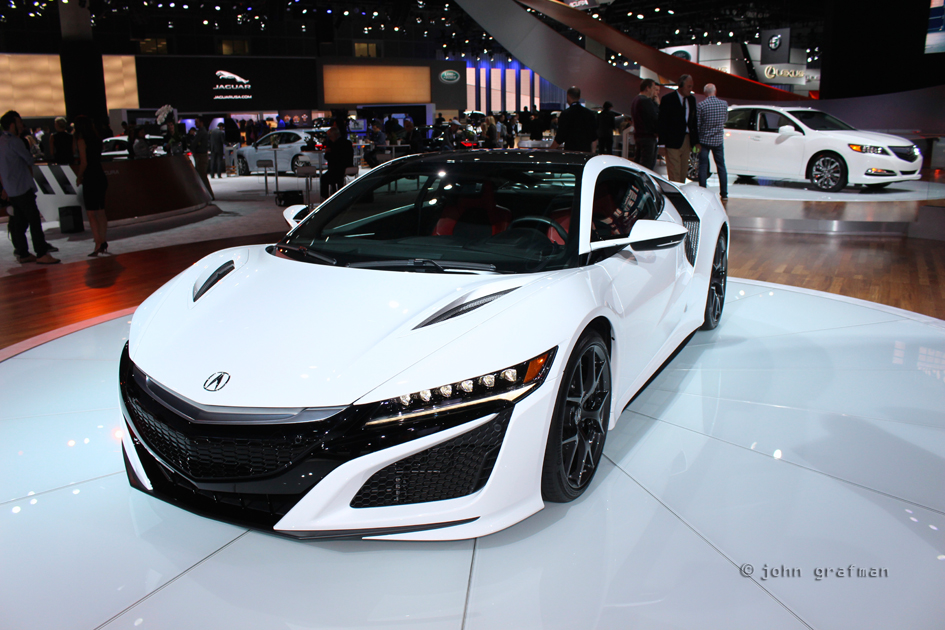 Development of the next-generation NSX involved a global team of engineers and designers, with development of the Sport Hybrid power unit centered in Tochigi, Japan. Development of the body, chassis, electrical, interior and other vehicle technologies including total system integration, was concentrated in Raymond, Ohio. Initial styling design for the NSX was conducted at the company’s Wako design studio in Japan, and was evolved for production by the Acura Design Studio in Los Angeles.

Throughout its roughly four-year development, the fundamental “human-centered supercar” concept for the next-generation NSX remained clear and consistent. However, the technologies and means by which the R&D team would realize their concept underwent a process of continual improvement and evolution, most notably in the area of engine design. Whereas the original direction called for a transverse-mounted, normally aspirated V6, the NSX development concept evolved to a new and more challenging approach: an all-new bespoke twin-turbocharged, longitudinally mounted V6. This radical re-imagination of the engine design had profound implications for every element of the NSX design—the package, cooling, aerodynamics, chassis and more.

The NSX has been tested and tuned on streets and race circuits around the world. Primary development was conducted at the Transportation Research Center adjacent to Honda R&D Americas Ohio Center as well as the Honda Takasu proving ground in northern Japan before moving to tracks such as Virginia International Raceway and the famed Nürburgring, followed by global “genteki” events (“at-the-spot” verification) which took NSX on public roads throughout the U.S. and Europe and beyond.

Construction of the NSX will take place at the new Performance Manufacturing Center (PMC) in Marysville, Ohio. The PMC was designed to innovate both the means and the methods of producing low-volume specialty cars and to realize challenging new ideas for next-generation craftsmanship and quality established by the NSX manufacturing team.

The PMC employs approximately 100 associates, including 70 highly skilled manufacturing technicians engaged in body construction, painting, assembly and quality confirmation of the NSX. Among its many innovative processes is the use of robotic MIG welding for the construction of the NSX’s aluminum space frame.

The NSX’s bespoke twin-turbocharged V6 engine is assembled by master engine builders at the company’s engine plant in Anna, Ohio. The engine is broken in on a dyno so that it’s track-ready when it leaves the factory. Then it’s mated to a direct drive motor (part of the hybrid system) and precision balanced as an assembly. Its bespoke 9-speed dual clutch transmission is then attached to the engine and this portion of the total power unit is sent to the PMC. The Twin Motor Unit (TMU) and other hybrid system components are built in Japan and shipped to Ohio for final assembly, completing the overall power unit. 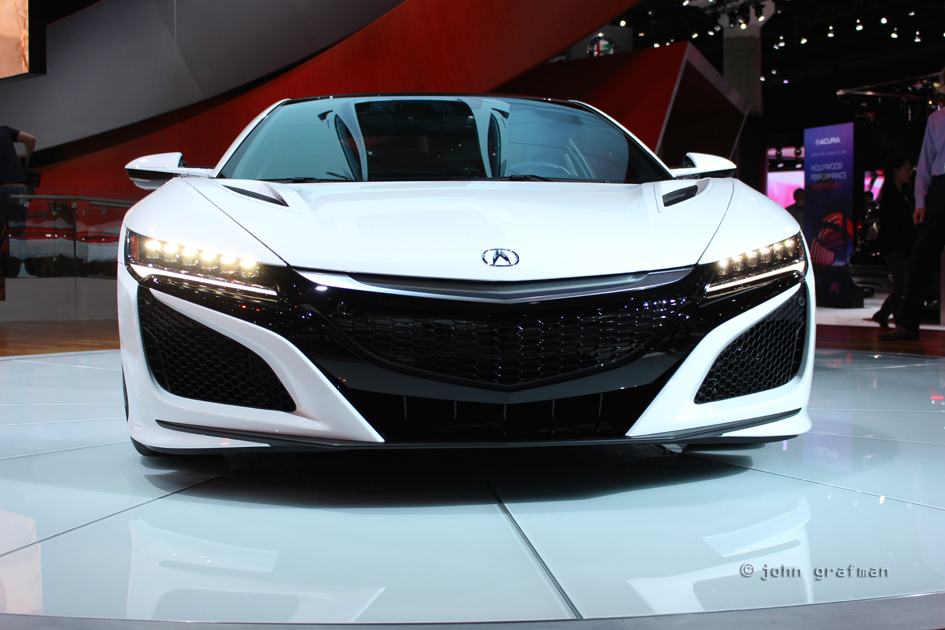 From its minimalistic yet contemporary design to its careful application of materials in the seat and steering wheel the team sought to support the driver and clarify the driving experience. The interior of the all-new Acura NSX has a “human-centric” ergonomically-enhanced design theme for both the driver and passenger.

Since steering feel and performance are such an important aspect of the on-rails handling nature of the high-performance NSX, unusually detailed attention was paid to perfecting the steering wheel. This included maximizing grip via a more ergonomic shape and increasing surface contact for the hands, as well as easier operation of the paddle shifters.

To maximize forward visibility, specially designed A-pillars made of ultra-high-strength steel were incorporated into the design of the all-new Acura NSX. These new pillars are actually a full inch thinner than those of the original NSX, but offer enhanced safety performance.

“In many ways, with the design of the all-new Acura NSX, you literally have form following function, so this was a really exciting vehicle to work on as an aerodynamicist,” says Thomas Ramsay, the Aerodynamics and Cooling Project Leader on the new Acura supercar.

NSX’s body shape was effectively designed to minimize aerodynamic drag while creating balanced front-to-rear downforce through a total airflow management focus on utilizing airflow through each vent, while extracting maximum energy from the airflow field to cool the brakes and manage power unit thermal loads.

Through extensive research and development, the NSX aerodynamics team determined that placing approximately three times as much downforce at the rear of the vehicle relative to the front of the car would provide the optimal downforce balance for high-performance driving as well as everyday functionality. Further evidence of the superior aerodynamics engineered into the NSX is that its high level of downforce is accomplished without the need for active aerodynamic bodywork or other devices. 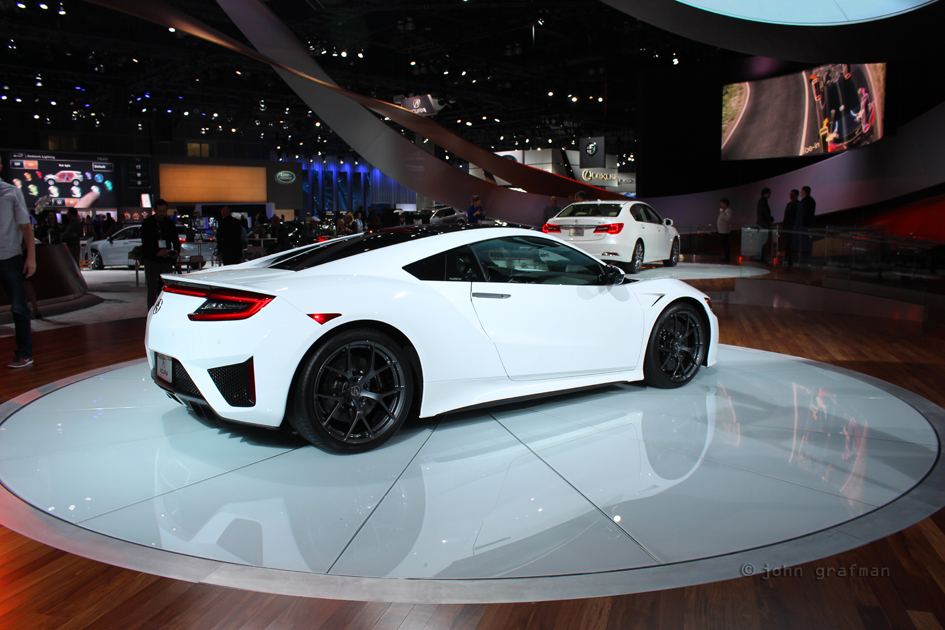 The highly innovative total airflow management developments that were discovered and implemented into the new NSX by the Ohio team were later confirmed at the company’s full-scale/moving ground plane wind tunnel in Japan.

Optimization of front/rear downforce distribution for improved handling and stability 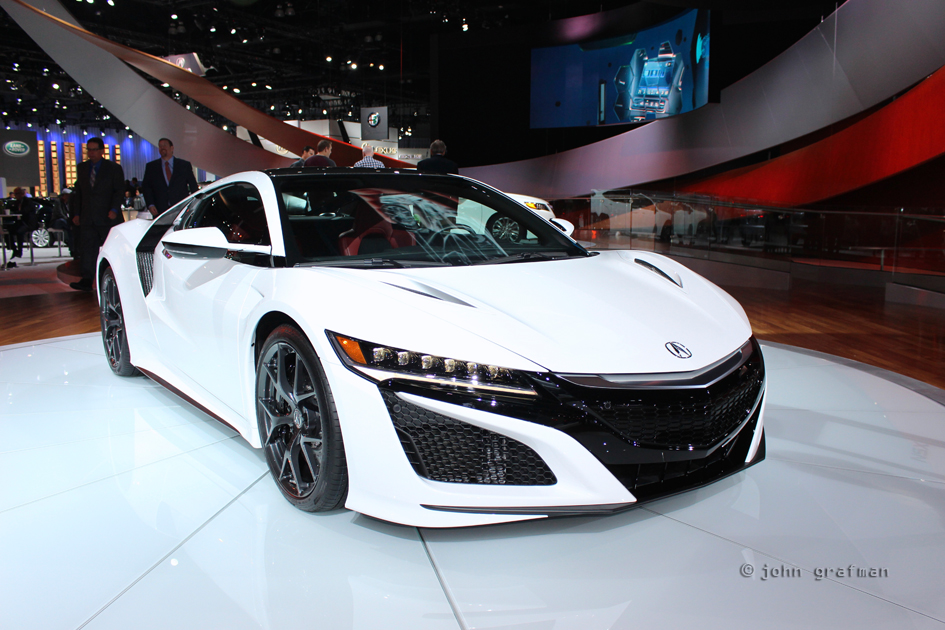 To develop an interior with exemplary ergonomics in terms of comfort and functionality, the Acura design team utilized a number of test drivers with wide-ranging driving backgrounds—from “regular” people to professional race drivers.—in order to gather information to improve all aspects of driver feel and comfort in the NSX.

Materials such as leather and Alcantara were carefully selected for the perfect combination of luxury comfort and dynamic driving support (such as lateral grip). Likewise, the center console/controls—designated as the Simple Sports Interface—have been designed to minimize the potential for distractions from the most important function—driving.

Stylish as well as structurally rigid and lightweight, the seats in the new NSX have been designed to offer superlative comfort and support. Alcantara is placed in the center section of the seat to increase lateral grip, while smoother leather is applied on the bolsters to allow freedom of torso rotation during cornering as well as easy of ingress and egress. Developed through extensive testing and pressure mapping measurements, these seats more in conjunction with the padded center console and door panel to provide whole body support during high G cornering.

At the heart of this new hybrid power unit is a bespoke, mid-mounted twin-turbocharged, 75-degree 3.5-liter DOHC V6 engine with dry sump lubrication, mated to an all-new 9-speed dual clutch transmission (9DCT) and Direct-Drive Motor. This is augmented by the front Twin Motor Unit (TMU) driving the front wheels. The NSX Sport Hybrid power unit offers exceptional horsepower and torque with a broad powerband for tremendous throttle response and acceleration. Total system peak output is estimated at 573 horsepower—500 horsepower from the gasoline engine and 73 horsepower from the front TMU.

In challenging to create a New Sports eXperience the next generation NSX will provide an intense and personal connection between the driver and machine that establishes a new and paradigm-challenging definition of supercar performance.